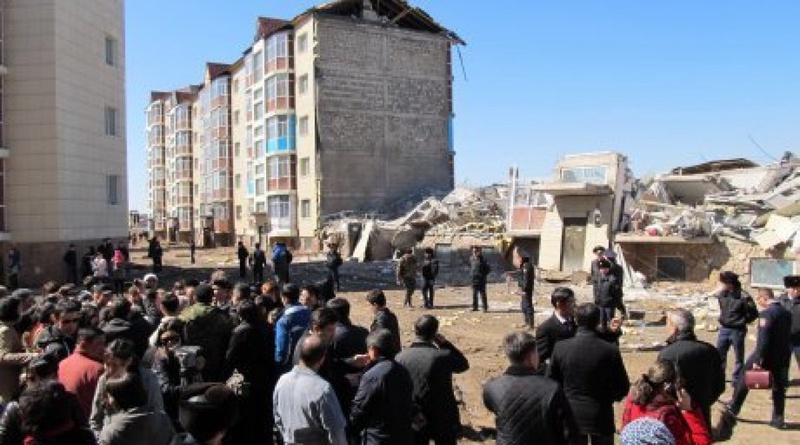 At the accident site in Bessoba complex. Photo courtesy of Sergey Perkhalskiy©
An unfinished multi-storey building in Bessoba residential complex in Karaganda has lurched to one side, Interfax-Kazakhstan reports. “The building was tilting one one side from 12:00 p.m. to 10:00 p.m. on Monday; the crack has reached 18 cm. It will collapse today or tomorrow,” the locals told Interfax-Kazakhstan. A resident of one of the neighboring buildings Sergey Abayev told that the crack had reached 10-12 cm during that day. The building started lurching in the evening and the crack has now reached 18 cm. “Nobody lives in this building. It’s construction is not completed. This is one of the last buildings constructed in Bessoba,” he said. Head of Kazybekbiy region of Karaganda Zhanat Iskakov, management of the city’s emergency situations department and representatives of the state architectural-construction control department have arrived to the accident site. The control markers installed on July 5 have moved apart. That confirms that the crack is widening. “Police officers and personnel of the emergency situations department have cordoned the building off. We have moved the cars away from the parking lots. Another danger in case of the building's collapse is that there is playground located only a few meters away from the building. Our kids play there in the evenings,” the residents of nearby buildings say. Earlier Tengrinews.kz English reported that the results of investigation of reasons that caused the 5-storey building to collapse in Bessoba residential complex of Karaganda were unveiled on May 15. “Development of unacceptable foundation settlement caused by soil swelling” was tagged the main reason behind the collapse. 5-storey residential building No.7 of Bessoba residential complex, constructed 3 years ago as an equity construction project, collapsed in the morning of April 6. A criminal case was initiated against the construction companies that erected the building No.7. Besides, a criminal case for abuse of powers was initiated against chairman and members of the state commission that accepted the building in exploitation after its construction.