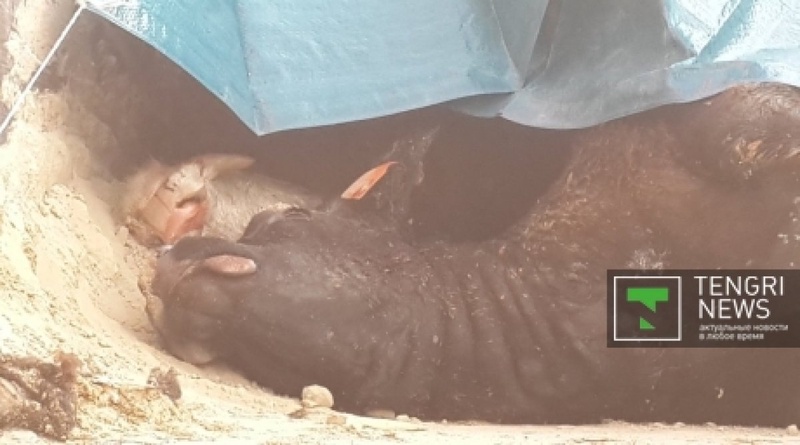 ©tengrinews.kz
49 Australian cows have died during import from Australia to Kazakhstan. They suffocated in the airplane,
Continuation
1.
900 more Australian cows to be delivered to Almaty
Tengrinews reports. 400 purebred breeder cattle were supported to be delivered to Almaty in a Boeing-747 on a public procurement order from the Kazakhstan government. The imported cattle was meant to be used to strengthen Kazakhstan's meat export capacities and increase pedigree livestock number in the country. According to Omirserik Kydyrbatev, Chief Veterinary Inspector of Almaty Oblast, "infringement of rules of air transportation of animals" caused the deaths of the cattle. Veterinarians found out that the cattle was dead only after the airplane landed in Almaty. "The airplane carrying the live cargo arrived today during the night. But it was discovered that part of the cattle died along the way. At first the deaths were through to be caused by some virus. But later the Veterinarian Service of the Agricultural Ministry reported that they were caused by a failure in the air conditioning system of the airplane. All the expenses arising from the accident are going to be incurred by the supplying company, not by Kazakhstan," KazAgro, an agricultural arm of the Kazakhstan government called to stimulated industrial development of the sector, commented the incident. The animals were loaded into the plane in a bi-level configuration in special boxes. "The animals on the lower level were fine, but those on the above level died. According to veterinarians, this happened because of the cows' natural wastes - ammonia became the source of poisonous vapors. And they suffocated because of insufficient supply of oxygen," one of the experts explained. The cattle was not supplied by water and forage, although the flight lasted for 17 hours. The plane made a stop in Singapore for refueling. The information about the total number of cattle on-broad the plane differs from one source to another. According to Deputy Chief Veterinary Inspector of Almaty Seitkhan Teltayev, 321 cow were loaded into the plane and 49 died during the flight. "Medical checks of the remaining cattle have been made. The corpses are being loaded onto trucks and transported to a cattle mortuary. Autopsy of one or two of the corpses will be made there," he said after the plane landed and the problem was discovered. Australian insurance company is going to compensate all the expenses related to utilization of the dead cattle, press-secretary of KazAgroFinance Aliya Isenova told Tengrinews. KazAgroFinance is the financial operator of state-run projects on support of Kazakhstan's agricultural industry. "This is an insurable event. We have not incurred any losses, since no money has been paid for the cows yet. The company that supplied the cattle has taken responsibility for the incident. As far as we know, 49 cows has been utilized at a special site near Kapshagay town. Problems with ventilation in the plane caused the deaths," he said. According Isenova, the supplier will deliver 49 pedigree cows to Almaty in the nearest future, to replace the lost cattle. Approximate cost of one Austrian cow makes 2-3 thousand dollars. Kazakhstan has imported to total of 5000 breeder cattle from Europe, Canada and Australian since the beginning of the year. By Roza Yesenkulova