Kazakhstan students may be deported to Kazakhstan only after they serve sentence: official12 августа 2013, 12:54 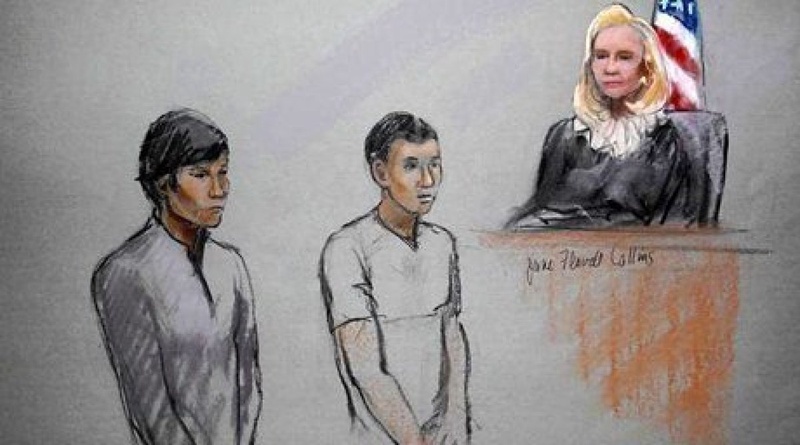 Dias Kadyrbayev (L) and Azamat Tazhayakov are pictured in a courtroom sketch at the John Joseph Moakley United States Federal Courthouse in Boston. ©REUTERS
Two 19-year-old Kazakhstan students Azamat Tazhayakov and Dias Kadyrbayev accused in the United States of conspiring to destroy evidences in the Boston bombings case may be deported to Kazakhstan only after they serve their sentence, Tengrinews.kz reports citing the press-secretary of Kazakhstan Foreign Ministry Nurzhan Aitmakhanov as saying at the briefing. “The hearing is scheduled for August 13. The students are expected to plead not guilty and go through other formalities at that hearing. After they plead not guilty the court will move to the phase of studying all the circumstances and contesting evidences. Should they be found guilty, they will be deported after serving the sentence,” Nurzhan Aitmakhanov said. He added that according to Kazakhstan General Consulate in New York the grand jury re-alleged the charges against Azamat Tazhayakov and Dias Kadyrbayev. The two teenagers are now charged with conspiracy to obstruct justice, obstruction of justice, and aiding and abetting for their role. “They will face the sentence of up to 25 years in jail (up to 20 years on first two counts and up to 5 years on the third count), followed by a 3-year probation period and a penalty of $250 thousand,” Aitmakhanov said. Legal proceeding on such cases are usually quite lengthy, he added. “Kazakhstan Foreign Ministry and the General Consulate are closely watching the case and are in constant contact with the parents and the attorneys of our two citizens,” the press-secretary said. The two 19-y.o. students from Kazakhstan Dias Kadyrbayev and Azamat Tazhayakov are charged with conspiring to destroy evidences in the Boston bombings case. According to the investigators, they tried to conceal evidence in the case of Dzhokhar Tsarnayev accused of committing bombings in Boston. They are not charge with involvement in the bombings of their preparations. The students have confessed that they took the backpack and the laptop. The evidences were later found at a waste dump. FBI believes that “they took the backpack from Dzhokhar Tsarnayev’s room after they heard on the news that Dzhokhar was suspected of committing the terrorist attack.” By Baubek Konyrov