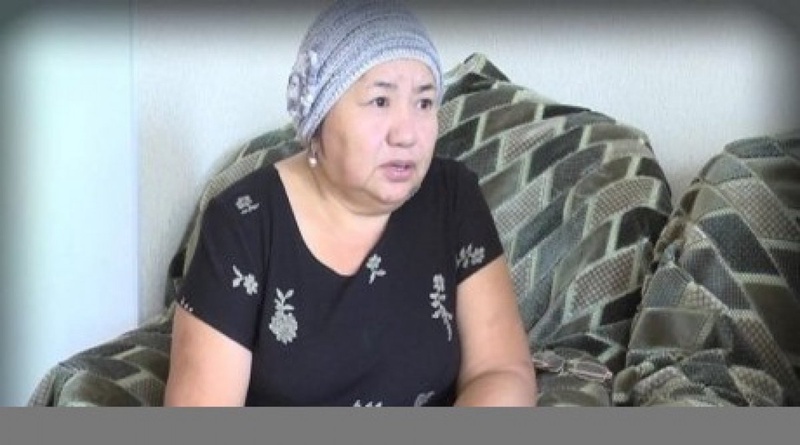 Gulzhan Utesheva. Photo courtesy of mgorod.kz
Names of two out of the dozen Kazakhstan nationals arrested in Dubai on October 30 for unclear reasons have become known, Tengrinews reports. The two men were natives of Uralsk town: Asylbek Shukranov, who has been living in the UAE for 5 years, and Kuanish Uteshev, who traveled to the UAE several days ago on a tourist visa with his family. The mother of Kuanish Uteshev share some details of the arrest with a local newspaper Moy gorod: “On October 23 my son and daughter-in-law with their three children left for their two week vacation in Dubai. They stayed at my daughter’s place. On the night of October 30 people claiming to be the local police burst into the house. Some of them were wearing masks. My son and son-in-law went to open the door. Both of them were knocked down, handcuffed and told to produce their IDs,” Gulzhan Utesheva said. According to Gulzhan, a woman who spoke Russian accompanied the policemen. She calmed Kuanish’s wife and sister down by saying that it was just a document check and that both men will be back in a couple of hours. An iPad, a computer and cartoon DVDs that the police found in the house were confiscated as well. Despite the Russian-speaking woman's promises, neither the relatives nor Kazakhstan diplomats have been able to locate the arrested men or find out anything about their fate after they were taken away. UAE officials are not disclosing any information about these arrests. Besides, according to UAE laws the police can arrest and detain any person for up to ten days with no explanations. “We’ve sent an inquiry to the Ministry of Foreign Affairs, my daughter and daughter-in-law who are in Dubai wrote to the Consulate, but still there is no information. We don't know why they were arrested and why they are still detained,” complained the mother. Kuanish’s wife with their children are unable to return home either, because the youngest child, who is 6 month old, not having his own ID, is registered in his father’s passport. “Our debit cards have been blocked. They have no money and their local acquaintances are helping them out financially. My husband is in Astana now. He has filed a protest to the Ministry of Foreign Affairs,” says Mrs. Utesheva. Mrs. Utesheva said that her son was Muslim, but a nominal one only, he had “never performed Salat and never been interested in radical Islam” and the daughter-in-law “obeyed the laws there (in the Emirates) and wore a long dress and a hijab”. In his interview for KTK channel Berdali Uteshev, the father of the arrested Kuanish, said that his son didn't do anything illegal in the UAE. According to the father, Kuanish had been living in Dubai and working at a local car market for several years. On the night of October 30 12 (or 13, according to some sources) Kazakhstan nationals were arrested in Dubai. Most of them were said to be living there for several years and working in a company exporting used cars or selling car parts.