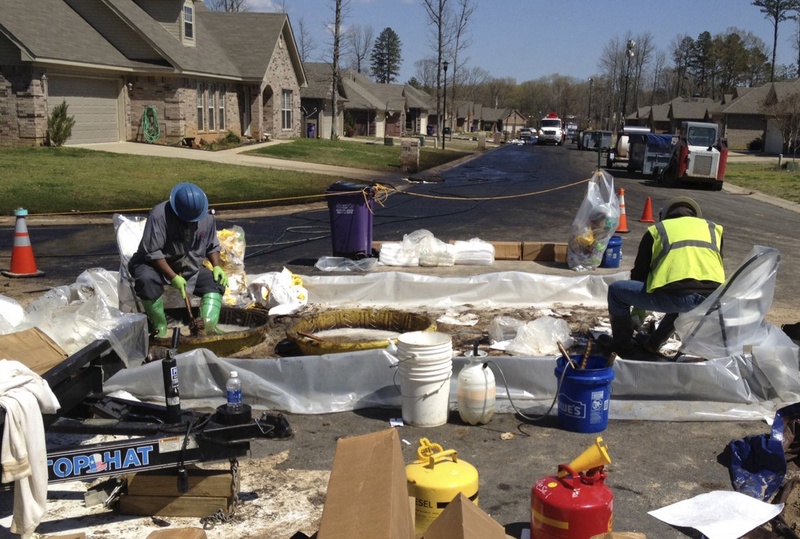 the Northwoods subdivision where an ExxonMobil pipeline ruptured in Mayflower. ©REUTERS/Suzi Parker
Arkansas opened an investigation into an ExxonMobil pipeline that unleashed thousands of barrels of crude and forced the evacuation of 22 homes, AFP reports citing the state's attorney general. The spill comes weeks before what is expected to be a raucous public hearing on the controversial Keystone XL pipeline, a $5.3-billion project to bring oil from Canada's tar sands all the way to refineries in the US state of Texas. ExxonMobil said its vacuum trucks had collected about 12,000 barrels of oil and sullied water and that crews have begun digging up oil-soaked soil and plants. Images of thick black crude flowing down a residential street and flooding yards in Mayflower, Arkansas have renewed concerns about the tar sand oil, which environmentalists say is harder to clean up because it sinks in water. Mayflower resident Amber Bartlett, who was among those evacuated after the spill on Friday, told CNN on Tuesday that a cul de sac in her neighborhood was "just covered ... nothing but oil." "It looked like a river flowing down the road," she said. Some 14 oiled ducks, two turtles, and one muskrat were recovered for treatment and two additional ducks were found dead, ExxonMobil said in a statement. Emergency crews reached the site within 30 minutes of the leak's detection and were able to keep the oil from reaching a nearby lake, it added. Arkansas Attorney General Dustin McDaniel sent a letter to ExxonMobil instructing the oil giant to preserve all documents related to the spill and ongoing cleanup in anticipation of "future litigation." "This incident has damaged private property and Arkansas's natural resources," McDaniel said in a statement. Mayflower has a population of about 1,700 people and is located north of Little Rock. On March 1, the State Department released a draft environmental impact statement suggesting the rerouted Keystone XL pipeline, which would transport some 830,000 barrels a day, would have no major impact on the environment. The statement examined how the 1,179-mile (1,897-kilometer) pipeline could affect wildlife and surrounding areas as it travels from the tar sands of Alberta, Canada to refineries in Texas. However, the report stopped short of recommending that President Barack Obama approve the project. Opponents and supporters now have until April 22 to comment, after which a final recommendation will be drawn up. The public hearing will be held on April 18 in Nebraska.