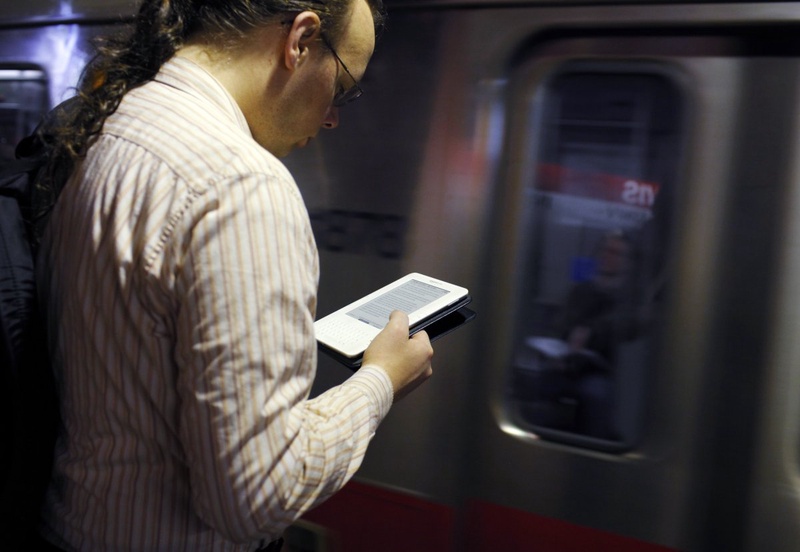 ©REUTERS
Apple's chief dealmaker acknowledged Thursday that prices of best-selling ebooks rose after the tech giant launched iPad book sales in 2010, but denied any role in a plot to fix prices, AFP reports. Eddy Cue, a senior vice president for many of Apple's Internet products, did admit in federal court that he had discussed a possible bid with late founder Steve Jobs to carve up the Internet books and music market with Amazon. Prosecutors produced figures at the high-profile antitrust trial to show that prices of best-selling ebooks rose after Apple launched its iPad in April 2010. Cue said he was "not surprised" but added that it had only affected "certain books." "I didn't raise prices," said Cue, a right-hand man of the late Jobs, who oversaw the launch of Internet successes such as iTunes and Apple's App Store as well as iTunes Radio last week. The US Department of Justice has accused Apple of being the "chief ringleader" in a price-fixing scandal that has cost consumers hundreds of millions of dollars. The company denies all charges. Apple has sought to put the blame on publishers for the increased cost of books. "They had expressed they wanted higher prices from us," Cue said. He disputed prosecutors' claims that the company did not care if people paid $12.99 or $14.99 for ebooks instead of the $9.99 on rivals such as Amazon. "Our consumers were protected" by the deal he arranged, Cue said. "I thought we were going to treat our consumers very, very fairly." Cue was closely questioned about talks in late 2009 and January 2010 with publishers Harper Collins, MacMillan, Simon & Schuster, Penguin and Hachette, which have settled with the government to avoid a trial. But he strongly denied any involvement in their alleged efforts to push up prices. "You constantly pitched the deal that you were proposing as a way for them to change the entire ebooks industry," said prosecutor Lawrence Buterman. At the time that Apple launched its iBooks store, Amazon already controlled up to 90 percent of the ebook market. Apple had planned a wholesale accord with the publisher's like Amazon, buying titles and then setting prices itself. It finally agreed a so-called agency model, in which publishers set the price and Apple receives a 30 percent commission on sales. Emails between Apple founder Jobs and Cue featured strongly in the debate. Jobs had initially opposed the iBooks venture but Cue said he convinced him and then raced to get the project finished as he knew his boss was dying. Jobs died from cancer in October 2011. Cue said he realised iBooks could be a success after testing prototype versions of the iPad. He rushed negotiations with publishers so that Jobs could announced the venture when he showed off the first iPad on January 27, 2010. Cue told the court there had been "tremendous pressure" to get negotiations finished for the launch as Jobs was "near the end of his life." "I wanted to get it done in time for that as I wanted to get it done for him," the executive said. One email exchange between Cue and Jobs showed the two had "contemplated" a "market allocation" deal under which Apple would let Amazon have the book market and Apple would take music. Cue acknowledged the talks but gave no detail as to why the pair decided not to go ahead. The trial is expected to last through Wednesday and Cue was due to give more evidence on Monday.