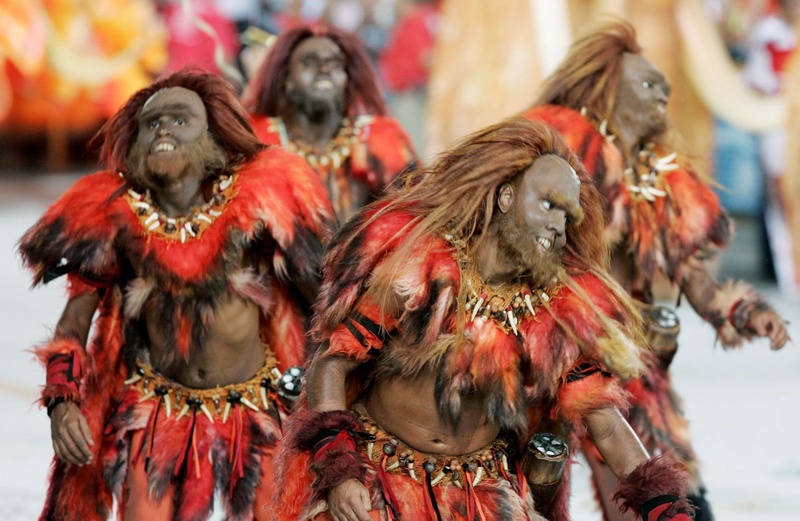 ©Reuters/Sergio Moraes
Thousands of years after they resonated in caves, two dozen stone chimes used by our prehistoric forefathers will make music once more in a unique series of concerts in Paris, AFP reports. Known as lithophones, the instruments have been dusted off from museum storage to be played in public for the first time to give modern Man an idea of his ancestral sounds. After just three shows -- two on Saturday (March 22) and a third the following Monday -- the precious stones will be packed away again, forever. "That will be their last concert together," music archaeologist Erik Gonthier of the Natural History Museum in Paris, told AFP ahead of the production. "We will never repeat it, for ethical reasons -- to avoid damaging our cultural heritage. We don't want to add to the wear of these instruments." Dubbed "Paleomusique", the piece was written by classical composer Philippe Fenelon to showcase the mineral clang and echo of instruments from beyond recorded time. They will be played xylophone-style by four percussionists from the French National Orchestra gently tapping the stones with mallets. The point is to highlight our ancestors' musical side, which Gonthier says is often overshadowed by their rock-painting and tool-making prowess. In fact, he believes, there might have been a strong link between music and visual art in prehistoric caves. "These were the first theatre or cinema halls," he speculated. The instruments, carefully-crafted stone rods up to a metre (3.2 feet) in length, have been in the museum's collection since the early 20th century. They have been dated to between 2500 and 8000 BC, a period known as the New Stone Age, characterised by human use of stone tools, pottery-making, the rise of farming and animal domestication. For decades, their solid, oblong shape made experts believe they were pestles or grinders of grain. Notes from stone But that perception changed a decade ago, thanks to a stroke of fortune. Gonthier, a former jeweller and stone-cutter, discovered their true, musical nature when he tapped one with a mallet in the storeroom of the museum in 1994. Instead of a dull thud he heard musical potential, and decided to investigate further. "I thought back to my grandmother's piano and the small supports which made the strings resonate. "I found some packaging foam in the trashcans of the museum I made two rests that I placed under either end of the lithophone, and tapped it. It made a clear 'tinnnnggg," Gonthier recounted. "My heart beat like crazy. I knew that I had found something great." Gonthier named his first lithophone "Stradivarius" after the famous makers of string instruments. The instrument was the result of a "grain-by-grain" chipping process that could have taken as much as two years to complete. Five years after his discovery, "Stradivarius" and dozens of other stones in the museum's collection were officially recognised as lithophones, a known if obscure category of musical instruments. The name derives from the Greek words for stone and sound. Gonthier said he had a long battle to convince other experts the stones could be safely used, with great care, for the upcoming concert. The museum's lithophones are mainly from the Sahara, many brought back by French troops stationed in colonies like Algeria and Sudan in the early 1900s. Gonthier says all lithophones, which can be made from types of sandstone or schist, share certain characteristics. Each one always comes to rest in the same position determined by its centre of gravity, and every instrument has two sound "planes" that can be found by tapping at 90 degree angles around its circumference. Importantly, the instruments are short and slim enough to be carried easily in one hand -- the earliest example of a portable sound system. "These were Man's first MP3s," said Gonthier. A case in point: "Stradivarius" was discovered about 1,500 kilometres (900 miles) from the rock from which it was most likely carved. To play, the instruments would have been rested on brackets made of leather or plant fibres, or even on the musician's ankles, sitting cross-legged, said Gonthier. The mallets may have had heads of wood or bone, although none has ever been found. The instruments were almost always found alone. Music may not have been their only purpose. They may also have been used to signal danger, "or even to call people to dinner," laughed Gonthier. "They can be heard from kilometres (miles) away in the desert or forest". One thing is clear: "They were made to last -- the proof is that we still have them today."