In Paris, umbrellas built to outlast their owners

In Paris, umbrellas built to outlast their owners

Easily broken and frequently lost, the humble umbrella is not usually seen as a luxury item. But for Frenchman Michel Heurtault, whose creations can sell for thousands of euros, that is just what they are. The 48-year-old artisan uses the finest of materials for his umbrellas and parasols, which are made to last and intended to be handed down from generation to generation. Despite his high prices, Heurtault's Paris shop attracts clients from around the world -- one Qatari princess went for an umbrella handle covered with shagreen, a type of leather, at a cost of more than 8,000 euros ($10,800). 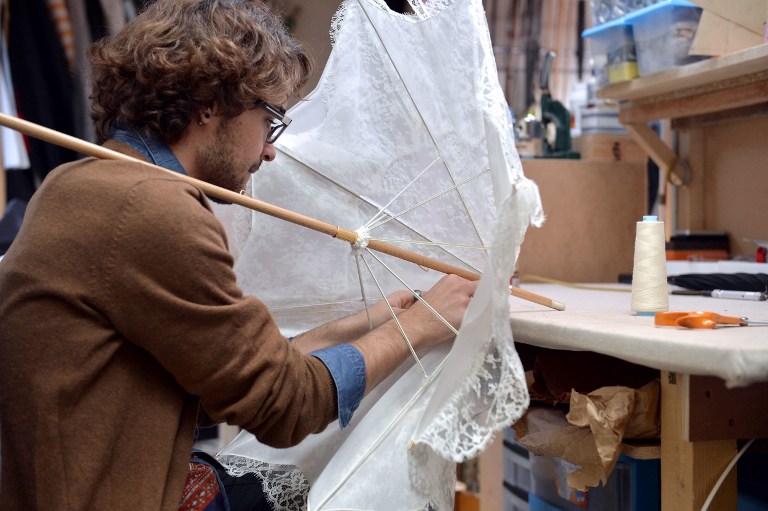 An employee adjusts material and framework of an umbrella, on October 29, 2013 in Paris, at the French Maison Heurtault, umbrella and parasol's creator. ©AFP

"Umbrellas have always been my passion," he says with a smile. "They were my favourite toy when I was small. I was fascinated -- which my mother found very strange!" he says, recalling how he used to take them apart, using parts from two to build a single umbrella. Heurtault only set up his business in 2008, but some of his tools are more than 100 years old. The setting is also special, in one of the elegant 19th-century arches under a former railway viaduct in eastern Paris housing many chic shops of skilled artisans "All those umbrellas are made in China," he says as he watches pedestrians pass by the shop on a wet autumn day. "Here, everything is done by hand, which is unique," says Heurtault, who also restores umbrellas and creates them for the film industry. Heurtault's business partner Jean-Yves Thibert says Australians and Japanese are "gaga for parasols", while umbrellas have a following in the United States and Europe, particularly in Austria and Germany. Throwaway culture  The cheapest lady's item costs 250 euros and is made of silk, with a leather-covered handle. For men, the cheapest is 490 euros, which buys an elegant gentleman's umbrella in silk twill with a maplewood handle. "You won't find that kind of finish anywhere else," says Thibert. 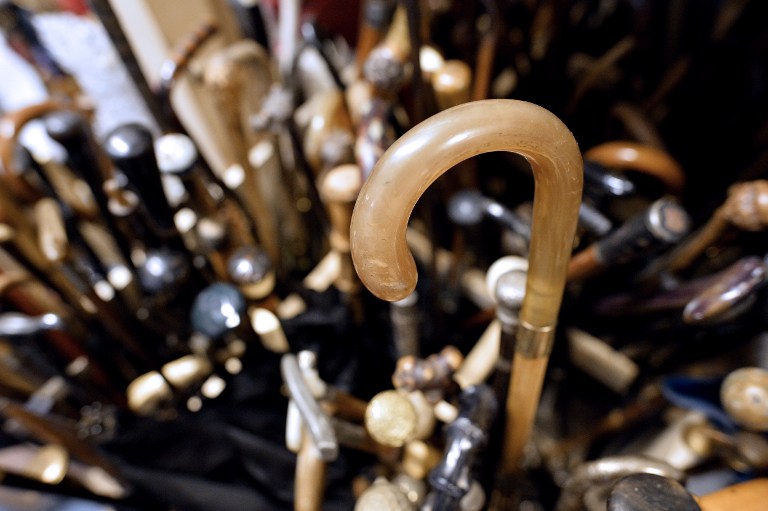 A picture taken on October 29, 2013 in Paris, shows the handle of an umbrella at the French Maison Heurtault, umbrella and parasol's creator. ©AFP

Heurtault despairs of what he sees as today's throwaway culture. "Things are becoming cheaper and cheaper, they don't last, they break easily and are disposable. These umbrellas are made to last generations," he says. "In the 1950s people didn't lose their umbrellas, they looked after them," he says. "Today a girl buys an umbrella for 10 euros, breaks it, and buys another for 10 euros. Of course it doesn't last." At Heurtault, they do things differently. Clients can opt for bespoke umbrellas, choosing the handle, the fabric, the pattern and the wood. "This is real luxury, it's not standardised," says Thibert, showing off antique handles sourced all over France. One is made of ivory with insets of pearl. Heurtault also works for the film industry, and has recently made parasols for a film version of Cinderella starring Cate Blanchett and a Woody Allen movie shot this summer on France's Cote D'Azur. "Costumiers on period movies come to me because they have no other choice. These traditional methods have been lost," says Heurtault, who began his career as a costumier, and has worked for the opera and made corsets for Christian Dior. 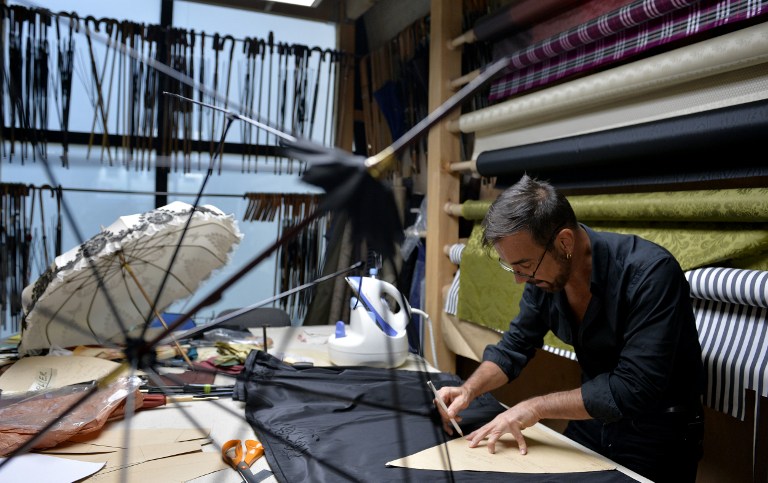 French Michel Heurtault, umbrella and parasol's creator, prepares material to put on a frame in his Paris workshop on October 29, 2013. ©AFP

He has just been named a Master of Art, an honour bestowed by France on highly skilled professional artisans. "It is the highest honour for an artisan," he says proudly. "I see it as ennoblement on merit." By Caroline Taix from AFP