The dominant Russian Orthodox Church's tough stance against the all-girl punk band Pussy Riot has troubled some faithful and estranged it from the younger generation it must foster for future growth. Many are now asking if the peculiar trial marks the moment when the Church's furious rise under President Vladimir Putin hit its zenith in a country where its dealings with the authorities has been controversial since Soviet times. "The hearings have undermined the Church's standing," said Vladimir Oivin of the Credo.ru religious issues website. "Even a suspended sentence (for Pussy Riot) will not be able to save it now," the close observer of the Church said. The three fresh-faced young women pulled on balaclavas before the altar of Moscow's biggest cathedral for a protest performance against President Putin at a terrible time for Church leader Patriarch Kirill. 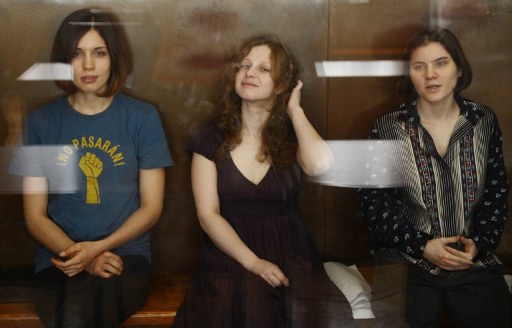 Members of a female punk band "Pussy Riot" Nadezhda Tolokonnikova (L), Maria Alyokhina (C) and Yekaterina Samutsevich (R). ©AFP The close Kremlin ally that winter was suddenly being accused of corruption by a new generation of young bloggers who were spearheading protests against Putin's return to a third term as president. Russia's entire ruling elite appeared to be temporarily stunned by the demonstrations and Kirill for one decided to fight back with force. He denounced Pussy Riot's February 21 "punk prayer" as "blasphemous" and led an open-air prayer service attended by tens of thousands that seemed designed to show off his ability to muster huge numbers on the streets at will. 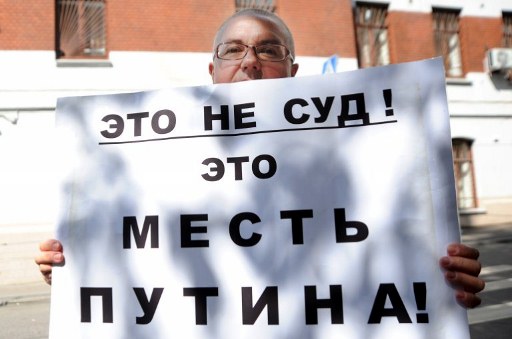 A person holds a poster in support of the all-girl punk band Pussy Riot, reading "This is not a trial, this is Putin's revenge". ©AFP  The Church refused to protest the detention of lead singer Nadezhda Tolokonnikova and her mates Yekaterina Samutsevich and Maria Alyokhina since March -- a line that eventually sparked a revolt from some in its own ranks. Archpriest Vyacheslav Vinnikov called the pursuit "an indelible disgrace" that echoed a time when the Church worked closely with the Communist Party and helped identify political dissenters to the secret police. "How can the patriarch, archpriests and priests stand before the altar and lead prayers to the heavens when their words lead to innocent martyrs going to jail," he demanded in an article for the Grani.ru website. Archdeacon Andrei Kurayev for his part told the Pussy Riot judge after being called by the prosecution that "we have seen plenty of evidence in the past six months that attempts to intimidate (protesters) do not work." The prosecution is now seeking a reduced sentence of three years of corrective labour out of the seven possible for the hooliganism motivated by religious hatred charge. 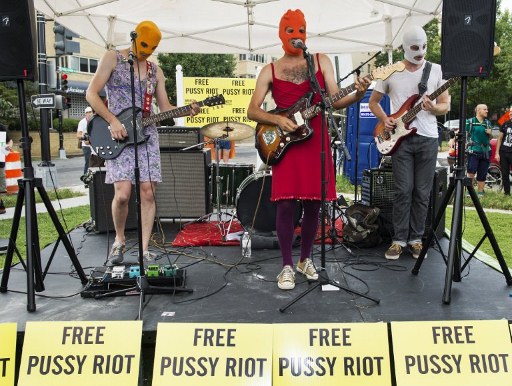 Members of the band "Brenda" perform in a dirt lot across the street from the Russian Embassy. ©AFP But that only happened once polls showed public opinion shifting and Church supporters suddenly being outnumbered by those who viewed Pussy Riot's treatment as too vindictive for the actual crime involved. This may be a worrying sign for an organisation that has grown exponentially -- both in power and property ownership -- under Putin and now views itself as Russia's moral voice. "The Church's problems have entered the daily discourse of society and are likely to stay there for a long time," said Russian Academy of Sciences analyst Alexei Beglov. Olga Sibiryova of the Sova human rights centre said many were fearing that cases like Pussy Riot show "that Russia is no longer a secular state." Russia has no official religion but polls show about 70 percent identifying themselves as Orthodox Christians. Yet the same data also identify fewer than seven percent regularly attending services -- one of the lowest figures in Europe and just half the rate in France. Some believe this makes the Church's constant presence on Russian state TV deceptive and its future still heavily dependent on Kremlin backing that could fade if the clergy keeps picking up unpopular causes. The liberal Vedomosti business daily concluded that the Church had just committed its "biggest error since 1901" -- the year it excommunicated the beloved Russian writer Leo Tolstoy. by Dmitry Zaks from AFP