For many years designer Guo Pei drew inspiration for her luxury clothes collections from travelling abroad, but recently she decided to focus solely on China's culture. The bubbly 44-year-old's move brought her company into a small but growing and increasingly influential club of luxury Chinese brands that are having success by focusing on their country's centuries-old heritage. Guo's 2012 collection draws inspiration from China's imagery and folklore -- red and gold dresses covered with scales to mark the Year of the Dragon and other clothes with hand-embroidered hems and sleeves. 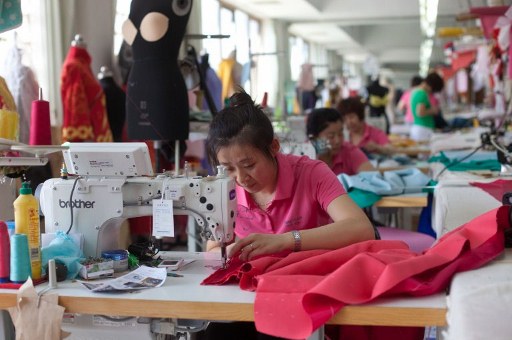 A worker at a sewing machine at Rose Studio. ©AFP

"After 2008 I realised how proud I was to be Chinese. In my last collection that is what I wanted to express. I wanted to speak about my country: its culture, its people," said Guo, perfectly groomed in an organza white dress. China has in recent decades become known as the workshop of the world, with tens of thousands of factories pumping out cheap products for shops globally sporting a 'Made in China' label that often evokes poor quality. But Chinese firms such as Guo's are now using the label as a marketing tool to create a new generation of home-grown luxury brands and convince the country's legions of rich to ditch their Chanel clothes and Bordeaux wines. "For thousands of years, 'Made in China' was synonymous with an unparalleled level of quality and craftsmanship," says Pascal Armoudom, a partner with consultants ATKearney who recently wrote a report on the subject. 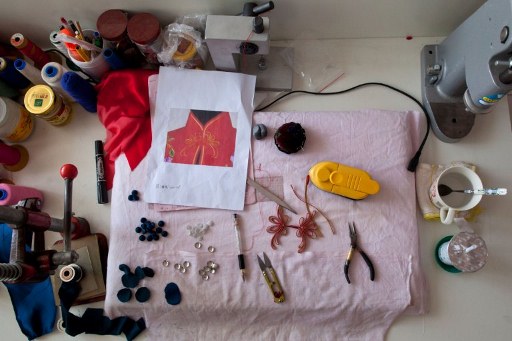 Tools on a desk in a workshop at Rose Studio. ©AFP

"This changed in the 20th Century as China headed down a different path. Quantity and cost savings reigned, and materials and craftsmanship, in turn, suffered," he added. "However, with China's economy booming once again, Chinese business leaders are reviving and marketing their centuries of know-how in an effort to create a new generation of luxury brands." 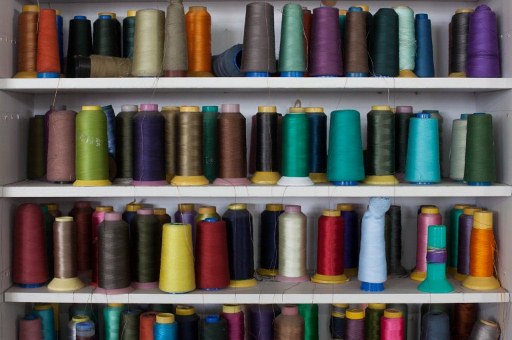 Spools of thread on shelves at Rose Studio. ©AFP

-- Riding the luxury wave -- Consulting firm McKinsey has estimated China's luxury market is worth $10 billion dollars and predicts it will rise to $27 billion by 2015 -- representing 20 percent of the global luxury market. Today, China boasts roughly 15 to 20 brands -- ranging from watches, jewellery, fashion or cosmetics -- that are riding this wave, hoping to compete with foreign firms in what has become the biggest luxury market in the world.

Brands such as Wenjun, a Chinese spirit-maker, fashion label NE Tiger or cosmetics firm Herborist say they adapt ancient techniques or materials to their products to cater to the tastes of the modern Chinese consumer. Herborist, for instance, uses traditional Chinese herbs and techniques to make upscale beauty products. It now boasts revenues of $300 million and is present in 900 Chinese department stores. The firm has even branched out overseas and has an international presence via global cosmetics chain Sephora. Moutai, a liquor made from fermented sorghum, has also rebranded its image and its vintage bottles are regularly breaking records at auctions, with some fetching up to 1.45 million yuan ($227,000). And NE Tiger is having success with modernising the traditional Chinese dress. 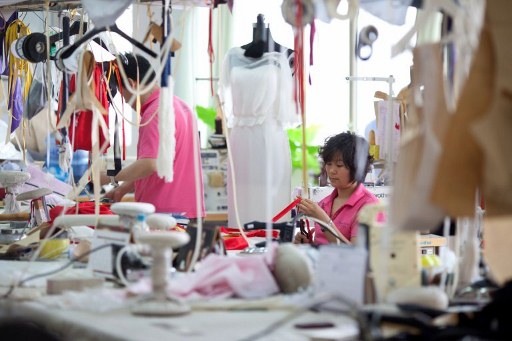 Founder Zhang Zhifeng travels to remote villages to find fast-disappearing ancient techniques such as the Yun brocade -- a combination of gold threads weaved into dresses -- to incorporate into cutting-edge designs. -- Potential for 'pride and patriotism' -- Chloe Reuter, who runs ReuterPR, a luxury communications agency in China, said there was huge potential for brands that tapped into pride and patriotism. "There is a new class of very sophisticated customers who are looking for something different. They won't go near the bling and show-off-image promoted by certain Western brands," she said. However, analysts pointed out that these home-grown luxury brands still only had a market share of around five percent, and that many challenges remained in their quest to gain recognition at home and overseas. They point out that even if patriotism is a selling point for some, many Chinese still prefer a Western brand associated with quality and seen as a symbol of status. "For many Chinese, their country is still synonymous with poor quality. And faced with the choice of a local brand or foreign one, many consumers still won't hesitate," said Armoudom from ATKearney. "The turning point, as we see it, will be the influence of a new Chinese generation -- those born in the 1980s and later who have more exposure to better-quality Chinese products and will prove more confident about purchasing them."

by Virginie Mangin from AFP