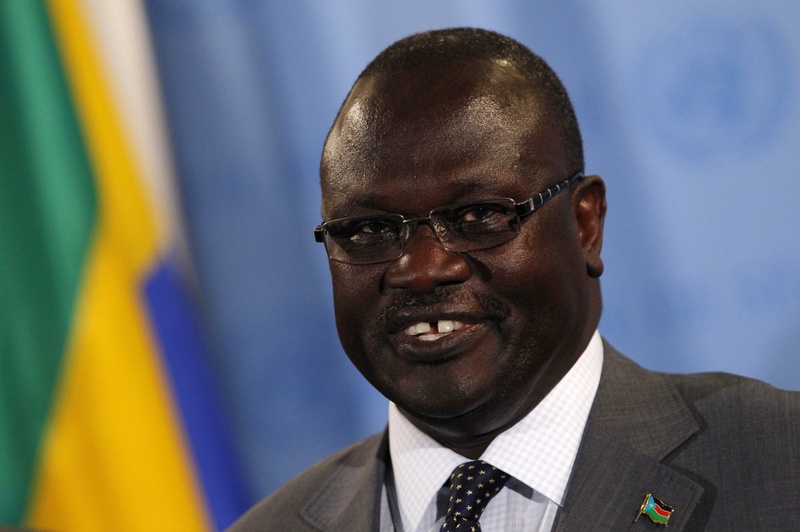 South Sudan's Vice President Riek Machar. ©REUTERS/Mike Segar
The world's youngest nation South Sudan has had a rough first year: border wars with the North, internal violence and shutdown of the oil production its economy depends on, AFP reports. With the approach of the first anniversary of independence from former civil war foes Sudan on July 9, euphoria has given way to a harsh reality. While massive steps forward have been made, South Sudan remains one of the poorest countries on Earth, where even the most basic infrastructure such as roads, electricity and water distribution networks still has to be built. After a year of independence, Vice President Riek Machar admitted to not having met the expectations of his people because of "the unforeseen difficulties we got ourselves into." "If there had been no difficulties and if the oil had still been flowing... (then) yes I would be disappointed" with our performance, he told AFP. A Western diplomat who requested anonymity argued "the results are dismal". "There has been progress, but it is not coming fast enough...The good thing is that South Sudan is emerging as a state and is slowly being integrated into the international community," the diplomat added. Machar also admitted South Sudan has taken "a step backwards" in its relations with Sudan since the independence celebrations. "It didn't go well, we got ourselves in a border war," he said, adding that now the two sides have returned to the negotiating table he was hoping for an improvement. South Sudan's independence came at a cost of millions of lives lost during nearly 50 years of civil war against Khartoum, and the year-old country remains one of the world's least developed nations. "What could we have hoped for in just one year? This is just an anniversary," said Alfred Lokuji, Dean of Rural Development at the University of Juba. "Institutions have not really taken off, first of all the parliament... the administration is not operating the way it should... and corruption continues to be a major problem," Lokuji said. Adult illiteracy stands at 73%, secondary school enrolment at 6%, and there is a glaring shortage of skilled professionals, although aid workers point out that South Sudan had to start from scratch after a 2005 peace deal. "We must keep things in perspective... It has only been a year, we know that the process will be long and difficult," said George Conway, country director for the UN development agency, noting that South Sudan is emerging from the longest civil war in Africa. The country still has few tarred roads. In the capital Juba, electricity comes from private generators and the hospital is short of staff, medicine and beds. Many patients sleep on the floor in the stifling heat. Statistically, a South Sudanese woman has more chance of dying during childbirth than completing her secondary school education. Yet there is the odd rare sign of progress achieved either in the past year or in the six years of autonomy that followed the 2005 agreement with Khartoum that ended a two decade long war, and set up a referendum on independence. UNDP's Conway noted the speed with which three layers of government -- local, state and national -- were put in place across South Sudan's 10 states. But donors fear that these gains may be cancelled out by the combined effects of increased tensions with Khartoum and the halting of crude production in January, which triggered heavy fighting along their disputed border. The government has already made massive cuts in the 2012-2013 budget, which is 40 per cent lower than the previous year's. The only sector spared the cuts is the army, which according to Lokuji, gobbles up half the budget at the expense of sectors such as education and health. But the authorities in Juba remain upbeat and continue to request loans from their international partners, despite doubts as to the economy's chances of survival. The donors are still angry because Juba did not consult them prior to stopping oil production. The population now faces runaway inflation, raising fears of the possibility of a major food crisis. While worries grow for the country's future, South Sudan struggles to even build a national identity: there are fears violent ethnic conflicts will escalate further as the unity that came with the fight for independence fades. "South Sudan was a premature baby that was not viable," the diplomat added.