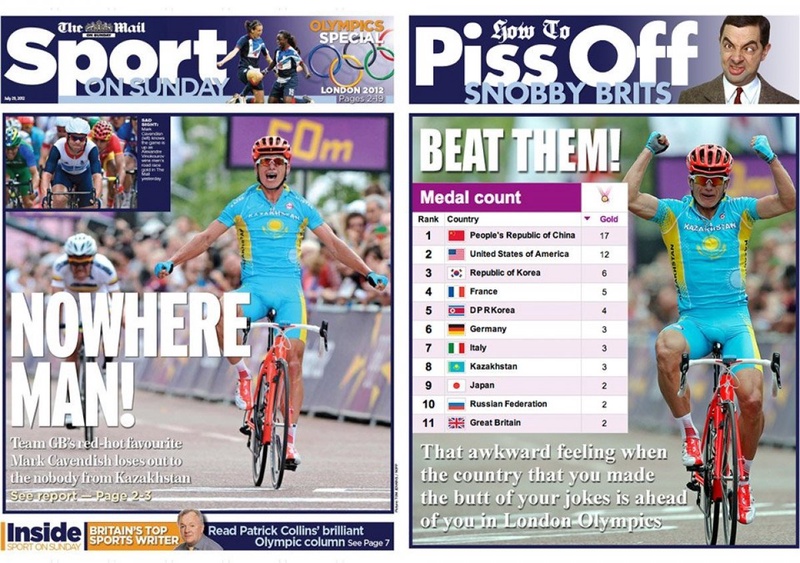 Daily Mail takes a blow from nowhere
The stunning victory of Aleksandre Vinokourov at London Olympics-2012 caused a heated discussion in British and international tabloids, as well as among Internet users. Vinokourov’s victory was a huge disappointment for British press and drove The Daily Mail so low as to insult him and Kazakhstan by calling Vinokourov "nobody" on its front cover. However, The Guardian defended Vinokourov stating that “Kazakhstan rider should be remembered as an exciting cyclist, who rode a good race at London 2012, and not a drugs cheat”. Later someone made a fake page of Daily Mail and revenged for Vino. The page is called “How to Piss Off Snobby Brits” and states: “That awkward feeling when the country that you made the butt of your jokes is ahead of you in London Olympics”. It also shows the medal count of Day 5 of the Olympics, where Kazakhstan is ranked 8th with 3 gold medals and Great Britain is only on the 11th place with 2 gold medals. Earlier Tengrinews.kz English reported that Alexandre Vinokourov claimed an unexpected but deserved win in the men's Olympic road race on July 28, wrecking Mark Cavendish's hopes of delivering the first gold of the Games for the hosts. Colombia's Rigoberto Uran won the silver with Norway's Alexander Kristoff taking the bronze after 249.5 km of racing which finished in the shadow of Buckingham Palace on The Mall. Race favorite Cavendish finished well off the podium as Britain's highly fancied team were undone by a combination of tactical racing and some incisive, late attacks.