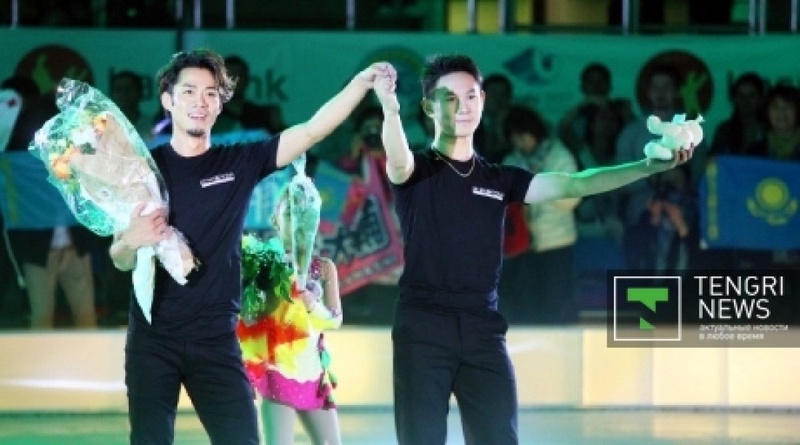 The ice show Denis Ten and Friends. Olympic Energy turned into an unforgettable experience for the guests of the show in Almaty.

Olympic champions, World champions and winners of European and national competitions arrived to Almaty to perform their best routines. The ice show started with a joint dance routine lead by Denis Ten. The performance was followed by Canadian Joannie Rochette, Russian talents Maxim Marinin and Tatiana Totmyanina, Brian Joubert of France and a dance couple Nathalie Pechalat and Fabian Bourzat.

Ice acrobats Vladimir Besedin and Alexey Polischuk took the ice rink after the world famous ice skaters. The audience remembered both acrobats from Denis Ten’s show back in 2013.

Carolina Kostner’s Ave Maria routine was one of the brightest performances among all the wondrous routines of the show. Back at the Sochi Olympics the audience burst with applauds to Italian ice skater’s passionate performance.

But the true highlight of the show was the ice battle between old rivals Denis Ten and Daisuke Takahashi. The double DT as they called themselves tried to outclass one another performing spins and complex elements to an accompaniment of drums.

One of the surprises of the show was a performance of a finalist of American So You Think You Can Dance Gev Manoukian. The dancer was born in Temirtau, Kazakhstan and moved to the United States when he was a child. Manoukian said that it was a pleasure for him to perform in his native country.

The audience was lucky to see the performance of the Japanese Mao Asada and Evan Lysacek from the U.S. as they were performing for the first time in a show outside their countries.

The audience was ecstatic and joyfully applauded all ice skaters and artists. There were also over 300 people who came from Japan, South Korea and China to support the figure skaters. Figure skating is gaining its popularity in Asia at the moment.

The last performance united all the ice skaters dressed in Kazakh national costumes specifically designed for the performers. They danced to a Kazakh melody along with the organizer of the show Denis Ten.

On June 1st Denis and his friends are performing in Astana. But as for Almaty audience and visitors, the Denis Ten and Friends. Olympic Energy show was truly unforgettable.