Roughly 50 known galaxies orbit the Milky Way. About 40 of them are faint and diffuse, and belong to the category of dwarf spheroidal galaxies.

Many of the recently discovered dwarf galaxies, especially those seen in large surveys such as the Sloan Digital Sky Survey (SDSS) and the Dark Energy Survey (DES), are extremely faint. These are so-called ‘ultra-faint dwarf galaxies.’

The faintest dwarf satellites identified so far are Segue 1, discovered by the SDSS, and Cetus II, detected as part of the DES survey. The latter is yet to be confirmed, as it’s too compact to be a galaxy. 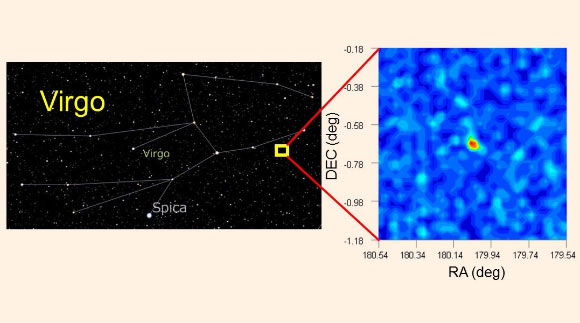 Left: the position of Virgo I in the constellation of Virgo. Right: a density map of Virgo I’s member stars in a 0.1 deg x 0.1 deg area. Image credit: Tohoku University / NAOJ.

It lies at a distance of 284,000 light-years away from us in the constellation of Virgo, and is beyond the reach of SDSS, which has previously surveyed the same area.

“We have identified a new ultra-faint dwarf satellite of the Milky Way, Virgo I, in the constellation of Virgo,” the astronomers said.

“The satellite is located at a heliocentric distance of 284,000 light-years and its absolute magnitude in the V band is estimated as -0.8 mag, which is comparable to or fainter than that of the faintest dwarf satellite, Segue 1.”

“The half-light radius of Virgo I is estimated to be 124 light-years, significantly larger than globular clusters with the same luminosity, suggesting that it is a dwarf galaxy.”

he discovery was made as part of the ongoing Hyper Suprime-Cam Subaru Strategic Program.

“We have carefully examined the early data of the Subaru Strategic Survey with Hyper Suprime Cam (a gigantic wide-field camera on NAOJ’s Subaru Telescope on Mauna Kea, Hawaii) and found an apparent over-density of stars in Virgo with very high statistical significance, showing a characteristic pattern of an ancient stellar system in the color-magnitude diagram,” said team member Daisuke Homma, a graduate student at Tohoku University in Japan.

“This discovery implies hundreds of faint dwarf satellites waiting to be discovered in the halo of the Milky Way,” said team member Dr. Masashi Chiba, also from Tohoku University.

“How many satellites are indeed there and what properties they have, will give us an important clue of understanding how the Milky Way formed and how dark matter contributed to it.”