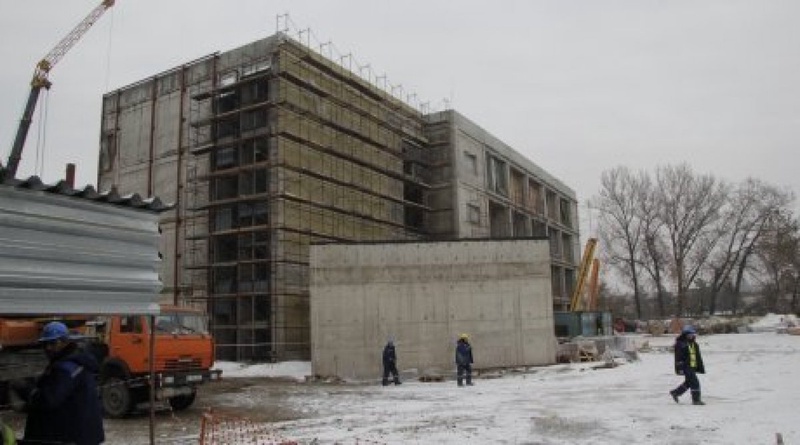 The CRL construction site. Photo © Dmitri Khegai
The Central Reference Laboratory (CRL), an infectious diseases lab being built in Almaty by the United States, has been criticized on numerous occasions. Kazakhstan public widely suspects that the lab can be used by the Pentagon to develop biological weapons once completed. The Akim (Mayor) of Almaty Akhmetzhan Yesimov has openly disapproved of its construction in his city, Tengrinews reports citing Interfax-Kazakhstan. Earlier this week, Yesimov met with popular bloggers for launch. They discussed construction of the laboratory in Almaty. “It turns out, the decision was made back in 2004. It was an agreement between Kazakhstan Ministry of Energy and the Department of Defense of the United States. I still cannot comprehend why the decision was made and why Almaty city was chosen for it,” Yesimov told the bloggers. “To tell you the truth, I do not like this project. It is being built on the territory of the Scientific Center of Quarantine and Zoonotic Diseases of the Kazakhstan Ministry of Healthcare and is supervised by the Ministry of Healthcare. (…) The Committee for Construction authorized the construction, while the city's Akimat (Municipal Authorities) was not taking any part in the decision process,” Yesimov stressed. He added that the Akimat set forth very high requirements towards the facility: maximum seismic resistance and sewerage limited to the territory of the laboratory. The Mayor is concerned with the location of the infectious diseases lab. “I do not understand why it should be located in Almaty when it could have been built, for instance, in Otar where there is a similar facility with pathogenic materials stored in it. That place belongs to the Ministry of Agriculture. Incidentally, the Minister of Agriculture advocated for having the CRL in Otar. As a Mayor, a human being and an Almaty native I do not like the fact that it will be in the city,” Yesimov said. The construction of the laboratory started on March 30, 2010. The former ambassador of the United States to Kazakhstan Richard Hoagland talked about opening of the CRL at his farewell reception. “Today we work closely with Kazakhstan to create a world-class place for storing dangerous biological pathogens,” said the diplomat in his farewell speech. Yerkin Durumbetov, a former Head of the Almaty Public Health Department, downplayed the information concerning the construction of the facility for dangerous biological pathogens and explained that it would be a reference laboratory that is designed “for recognizing the level of bacteria in dangerous infectious diseases such as plague, cholera, Siberian plague and FMD”. The Ministry of Healthcare said that there were similar reference laboratories in the United States, Canada, Ukraine and Georgia, And Kyrgyzstan was planning on opening a similar laboratory as well. The CRL would accommodate experts from the Kazakhstan Ministries of Health, Agriculture and Education and create better conditions for them to conduct research on infectious diseases with state-of-the-art equipment. At the same time, the CLR is expected be an educational center for specialists from different regions and institutions involved in the research of infectious diseases in Kazakhstan to help them create new methods of diagnostics and identification.