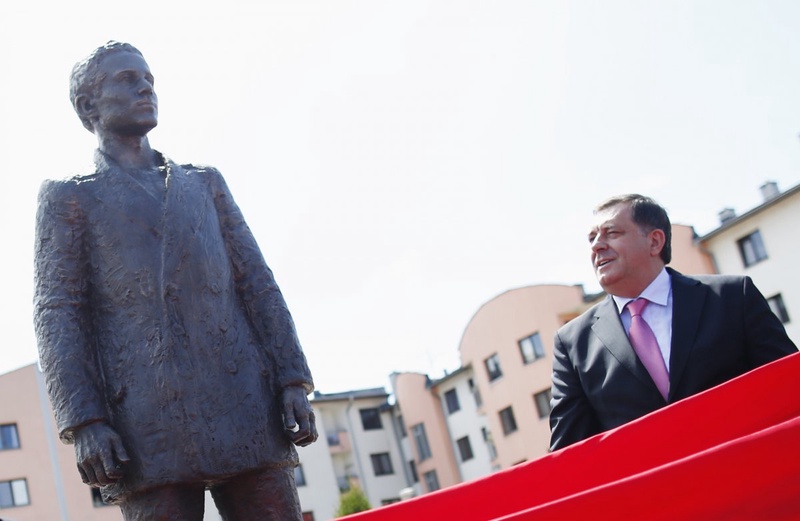 President of Republika Srpska Milorad Dodik watches as a statue of Gavrilo Princip is uncovered during an opening ceremony in East Sarajevo. ©Reuters/Dado Ruvic

Sarajevo on Saturday was to mark 100 years since the assassination that sparked World War I, an act that still deeply divides the people of the Balkans over the legacy of that fateful day, AFP reports.

On June 28, 1914 a Bosnian Serb nationalist shot dead the Austrian Archduke Franz Ferdinand and his wife, setting off a chain of events that sucked Europe's great powers into four years of violence unprecedented in its scale and intensity.

Many of the former foes marked the centenary on the sidelines of an EU summit on Thursday with a low-key ceremony at Belgium's Ypres, where German forces used mustard gas for the first time in 1915.

But the deep Balkan divisions stirred up by the anniversary have made it impossible for heads of state and government to come together at the site of the assassination in the Bosnian capital.

Wildly differing interpretations of 20th-century history endure in a region where the scars of the wars that marked the break-up of Yugoslavia in the 1990s, unleashing centuries of resentment and divisions, are still fresh.

And a particularly divisive figure is the archduke's assassin, the 19-year-old Serb nationalist Gavrilo Princip.

While the Muslim majority in today's Sarajevo see Princip as a terrorist who unleashed calamity, the Serbs regard him as a hero seeking to liberate the Slavs from the Austro-Hungarian occupier.

Resenting the notion that Serb nationalism was to blame for triggering the Great War, Bosnian Serb leaders have refused to join the main Sarajevo commemorations that will feature a late afternoon performance by the Vienna Philharmonic, the symbolic envoy from the capital of a once-loathed empire.

Instead they will hold their own early afternoon ceremonies, unveiling monuments to Princip in a Serb area of Sarajevo as well as in eastern Bosnia and in Belgrade.

Princip's brazen attack 100 years ago dragged almost half the world's population into a cycle of violence of unprecedented scale and intensity.

Over 52 months, it left some 10 million dead and 20 million injured and maimed on its battlefields, while millions more civilians perished under occupation, through disease, hunger or deportation.

Four of the world's most powerful empires -- Russian, German, Austro-Hungarian and Ottoman -- collapsed as the world map was redrawn and Europe's ruin cleared the way for the rise of a new superpower, the United States.

And World War I fanned the emergence of many of the ideologies that fashioned the 20th century and its conflicts, including anti-colonialism, Communism, Fascism and Nazism.