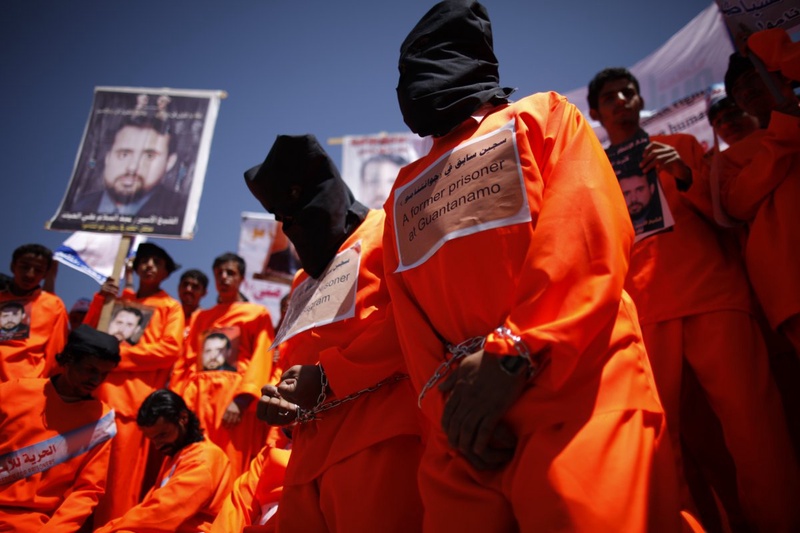 ©REUTERS/Khaled Abdullah
President Barack Obama may name a new envoy as a first step toward honoring his renewed pledge to close Guantanamo Bay, but the path to shuttering the "war on terror" camp seems as intractable as ever, AFP reports. With more than half of the inmates on a hunger strike, Obama said the situation was "not sustainable" in rare comments Tuesday on a jail that stained the US image and that he promised, and failed to close in his first term. A day later, the White House was under pressure to explain exactly how Obama planned to do things differently for the George W. Bush-era facility. Spokesman Jay Carney said the president was considering naming a new senior State Department official to work to transfer some of the 166 inmates still in the camp and on the way to close it. "There are a number of things that we can do," said Carney. "One of the options available to us that we're examining is reappointing a senior official at the State Department to renew our focus again on repatriating or transferring detainees that we determine can be returned to their home countries or third countries." The previous envoy, Daniel Fried, was reassigned by the agency earlier this year and no new official has been named. The White House had apparently quietly halted the near-impossible chance of closing Guantanamo. But the task any envoy would face remains daunting. The White House again accused Congress of blocking Obama's efforts to close the camp, by restricting its plans to transfer inmates deemed too dangerous for release to a planned top security jail in the United States or to try prisoners in civilian courts. Congress has also restricted funds that Obama could use to transfer inmates cleared for release to their home countries. "We will work with Congress to try to persuade them of the overriding national security interests as well as economic interests in closing Guantanamo Bay," Carney said. But a majority of lawmakers, particularly Republicans, have insisted the jail should stay open, that the detainees are too dangerous to hold on the US mainland and that the suspects should only be tried before military tribunals. Some human rights and legal advocacy groups, along with some lawmakers, also complain that Obama has not exhausted the power he already has to free inmates. Congress in 2012 gave Obama the power to waive, on national security grounds, limits it placed on his ability to transfer inmates who are deemed suitable for release. "The administration has never certified a single transfer," said Howard "Buck" McKeon, Republican chairman of the House Armed Services Committee. "Contrary to what President Obama has implied, there are no restrictions on releasing detainees who have won their habeas cases in federal court." Carney sidestepped a question as to why Obama had yet to use that waiver power. But any decision to do so would require a political leap of faith, as the secretary of defense would have to certify that the detainee would not engage in terrorism or act against the United States in the future. Obama has also complicated matters further by maintaining a moratorium against sending cleared detainees back to Yemen -- about half of the inmates still at Guantanamo hail from the troubled country. The moratorium was imposed after an attempt to down a US airliner in Detroit on December 25, 2009 was traced back to Al-Qaeda's franchise in Yemen. Democratic Senator Dianne Feinstein, concerned about the impact of the hunger strikes, urged Obama in a letter last week to reconsider the moratorium. "The fact that so many detainees have now been held at Guantanamo for over a decade and their belief that there is still no end in sight for them is a reason there is a growing problem of more and more detainees on a hunger strike," Feinstein said in a letter to National Security Adviser Tom Donilon. "I believe it would be prudent to revisit the decision to halt transfers to Yemen and assess whether President (Abdrabuh Mansur) Hadi's government, with appropriate assistance, would be able to securely hold detainees in Sanaa." Carney said the situation was under review, but "the moratorium remains in place." The task is also complicated by the fact that the administration's effort to try the most dangerous inmates -- including accused September 11 attacks plotter Khalid Sheikh Mohammed -- in civil court has failed. He is now facing a military tribunal at Guantanamo Bay. Another category of inmates is also holding up the closure of the camp -- those who are deemed too dangerous to be released, but who cannot be tried because evidence against them may have been extracted by harsh interrogation methods branded by critics of torture.