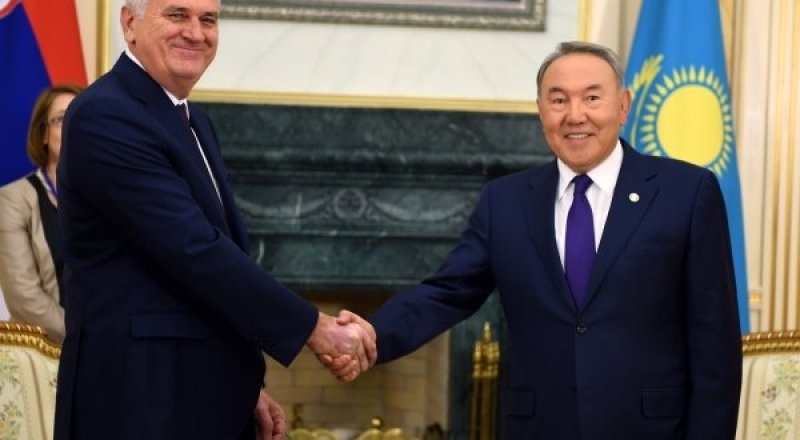 President Nikolić met with the President of Kazakhstan Nursultan Nazarbayev to discuss ways of developing and strengthening Kazakh-Serbian relations.

In particular, Nikolić stressed developing trade and economic cooperation between the countries. During the meeting the in Astana the Presidents discussed possible common points.

"We have talked about an early meeting of the intergovernmental committee on trade and economic cooperation. For Serbia it is important to get a positive response concerning the export of Fiat cars, manufactured in Serbia to the Eurasian Union," Nikolić said after the meeting with Nazarbayev.

The President of Serbia also noted a potential for cooperation in energy, construction and agriculture.

In turn, President Nazarbayev noted that the existing potential in trade and economic cooperation between Kazakhstan and Serbia remained largely unused.

"The Republic of Serbia is an important partner for Kazakhstan. But the trade between the countries is currently at a low level. We plan to cooperate in agriculture, pharmaceutics, construction, recycling and transportation," Nazarbayev said.

In addition, President Nikolić stressed that the relations between Serbia and Kazakhstan would not be limited by trade and economic cooperation alone. "Serbia does not measure friendship by volumes of trade transactions," Nikolić said.

Nikolić thanked Nazarbayev for not supporting the independence of Kosovo in favor of Serbia.

"Serbia appreciates the fact that Kazakhstan has not recognized the independence of Kosovo proclaimed on unilateral basis and supports Serbia in various international organizations. I asked President Nazabryave to help Serbia in protection of the country’s cultural heritage in Kosovo and not allowing it to be turned by illegal and anti-civilized methods into Kosovo's heritage. This would turn Serbian cultural and spiritual identity into Albanian," Nikolić said.

During his visit, Nikolić also met with the Chairman of the Majilis, the lower house of the Kazakh Parliament, Kabibulla Dzhakupov. President of Serbia said that Serbia would support Kazakhstan’s bid for non-permanent membership in the UN Security Council for 2017-2018, according to Khabar TV channel. In turn, Dzhakupov stressed that Serbia was an important and promising partner in South East Europe.

In conclusion of the visit, Nazarbayev thanked Nikolić for his understanding and trust, and expressed hope for a fruitful cooperation.

"I am glad that Kazakhstan has officially opened a consulate in Belgrade. I also hope for an increase of the mutual trade turnover after my visit. Serbia is become a solid partner for investments. Kazakhstan has a good geographic location and investors can rely on the education of work force in the country. (…) Kazakhstan also proved its friendship during the 2014 May flood when the country rendered us help. We will never forget it," the President of Serbia concluded.