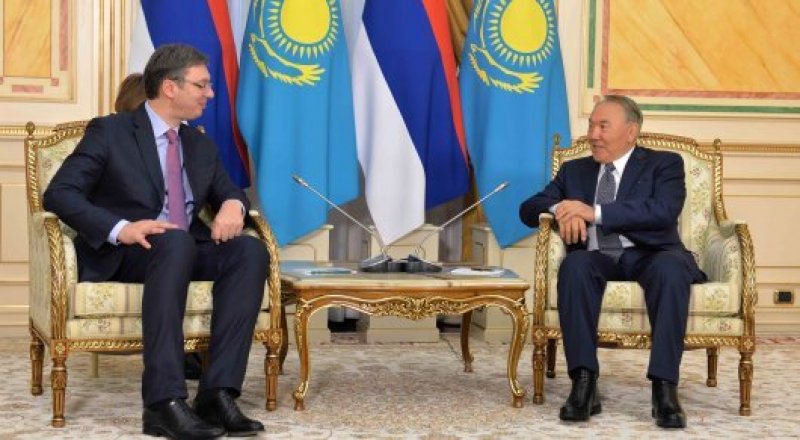 Meeting of the President of Kazakhstan Nursultan Nazarbayev and Prime Minister of Serbia  Aleksandar Vučić was held in Astana, Tengrinews reports citing the press service of Akorda.

During the meeting, they discussed issues of implementation of the agreements reached between the two countries during the official visit of the Head of State in Serbia in August this year.

The President pointed out that Serbia is an important business partner of Kazakhstan in Europe, pointing to the existing potential for development of economic relations.

"Kazakhstan has registered 24 Serbian companies, but only 15 of them actually operate. However, a good example of successful work of the Serbian business in Kazakhstan is a company, which was involved in the construction of the underground rail system, office buildings and a bank. Thus, the opportunity to continue and strengthen, first of all, economic cooperation is obvious." - said Nursultan Nazarbayev.

The Kazakhstani leader expressed hope that the successful negotiation of the Serbian side with the government of Kazakhstan, as well as participation in the upcoming business forum would contribute to strengthening bilateral relations.

The President also invited Serbian companies to take part in the implementation of the infrastructure project "Nurly Zhol", an industrial and innovative development programme.

"You should visit the Nazarbayev University, which brings together the best traditions of education and strongest teachers from around the world. The university students are provided with the cutting edge material and technical resources for studies, the primary task of this institution is to train high-level personnel for the effective implementation of government objectives." - Nursultan Nazarbaev said.

Serbian Prime Minister thanked Nursultan Nazarbayev for the hospitality and noted the President’s contribution in the development of the capital and the country in general.

In addition, A. Vučić emphasised that Serbia finds the experience of Kazakhstan’s development very useful in various fields of economy.

Earlier, at the initiative of the Serbian side President Nursultan Nazarbayev had a telephone conversation with the President of the Republic of Serbia Tomislav Nikolić.