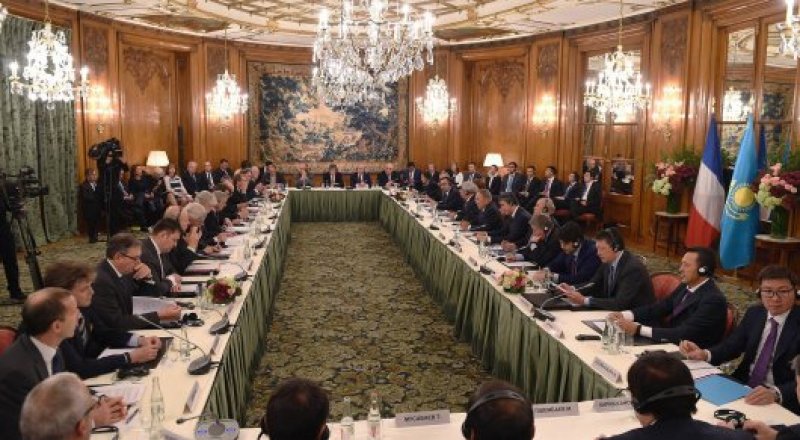 Kazakhstan’s President Nursultan Nazarbayev had a meeting with President of France Francois Hollande as part of his official visit to France on November 6, Tengrinews reports.

The two leaders discussed bilateral cooperation and shared views on the most pressing issues on the international agenda.

According to Nazarbayev, France is one of the major partners of Kazakhstan and today both countries have a complete mutual understanding in many aspects of economy and politics.

During the meeting, Nazarbayev and Hollande also talked over the implementation of the agreements reached between the two countries during the last visit of the French President to Kazakhstan in December last year.

Astana and Paris have a huge potential for cooperation in trade and economy, investments, culture and humanitarian aid as well as in space industry, according to Nazarbayev.

In addition, France signed an agreement on its participation in EXPO-2017 to be held in Astana in summer of 2017. Apart from that, a number of important bilateral agreements were inked during Nazarbayev's visit to France. These include a declaration of intent for the development of cooperation in space between the Aerocosmic Committee of Kazakhstan’s Ministry of Investments and Development and the National Center for Space Studies of France as well as a joint declaration between Kazakhstan’s Ministry of Education and Science and the Ministry of Higher Education and Research of France.

Besides, Nazarbayev awarded  the Order of Dostyk (Friendship) of first degree to Francois Hollande. This award is bestowed on individuals for the promotion of international and civil consensus in society and promotion of peace, friendship and cooperation between nations.

When addressing the participants of the meeting, Nazarbayev emphasized that most of those companies had worked in Kazakhstan and knew the country’s opportunities and long-term prospects well. “24 French companies have already implemented projects totally worth more than $2 billion in Kazakhstan, 14 of these projects are already underway, while another 10 will be launched in the near future. In the course of this visit, deals amounting to more than $5 billion will be signed,” Nazarbayev said.

The Kazakh leader spoke about trade, economic and investment cooperation between the two countries in detail. “France is among key economic partners of Kazakhstan. Over the past few years, our trade turnover has remained at $6 billion despite the complicated external situation. Over the past decade, French businesses have invested around $12 billion in our economy. 130 French companies are working in Kazakhstan in various areas,” he pointed out.

Nazarbayev also mentioned the projects implemented jointly with Airbus. “Kazakhstan has opened a plant that will produce high-tech products from our titanium, which will then be used in the assembly of Airbus aircrafts. At the same time, Kazakhstan’s company Air Astana also exploits aircrafts made by the French aviation industry," Nazarbayev added.

According to him, the launch of direct flights between Astana and Paris in April 2015 and introduction of visa-free entry for French investors by Kazakhstan had a positive effect on the investment cooperation between the two nations.

Aside from that, the trade deals signed between Kazakh and French companies cover such important areas as the supply of uranium to France, automotive industry, water supply and waste disposal, Nazarbayev added.

In his speech, Nazarbayev also touched upon the country’s work aimed at further improvement of the investment climate, implementation of five institutional reforms and 100 Steps program, Nurly Zhol program and informed the ranking French officials about the course of preparations for the EXPO-2017 in Astana.

At the end, Nursultan Nazarbayev invited French businessmen to actively participate in the industrialization of Kazakhstan, planned privatization of large enterprises and creation of the international financial center Astana on the basis of EXPO-2017 venues.

“Heads of large French companies praised Kazakhstan’s work in forming a favorable investment climate noting that the country had proved itself as a reliable partner. Representatives of the French businesses expressed their high interest in the implementation of new projects together with the Kazakh companies,” Akorda press office said.