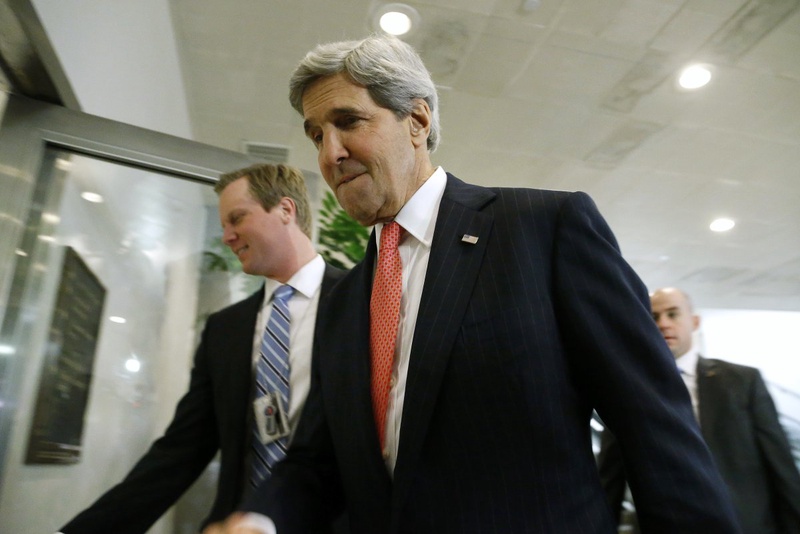 U.S. Secretary of State John Kerry. ©Reuters/Jonathan Ernst
US Secretary of State John Kerry was marking his 70th birthday Wednesday leaving again for Israel, in his dogged quest for an elusive Middle East peace deal, AFP reports. But there will not be a gift-wrapped agreement awaiting him when he is due to land back in Israel on Thursday, less than a week after his last trip to the Jewish state. The top US diplomat, who joked this week about his "commute" to the Holy Land, is embarking on his 20th overseas trip since he took office in January. It will be his ninth night trip to Israel and the West Bank. On Thursday he is due to have dinner with Israeli Prime Minister Benjamin Netanyahu, and he will also meet with Palestinian leader Mahmud Abbas, before then heading east to Vietnam and Manila. As he seeks to keep the Palestinians and Israelis on track to reach a deal within in tight nine-month deadline, Kerry reiterated warnings late Wednesday that the status quo was unsustainable. "I've heard all the arguments from all the pundits on all sides," Kerry told an event organized by Foreign Policy magazine. "The conflict is too frozen. It's too complicated. They don't trust each other enough. There's no way possible that there are the ingredients to try to make peace. It's a fool's errand to believe that the future could be better than the past. President Obama and I reject that cynicism,." the online magazine quoted him as saying Kerry met Monday with Israeli chief negotiator Tzipi Livni and her Palestinian counterpart Saeb Erakat in Washington for three-hour trilateral talks. But after initial optimism following the relaunch of the direct Israeli-Palestinian negotiations in July following a three-year hiatus, hopes are now beginning to fade. Yasser Abed Rabbo, a top official with the Palestine Liberation Organization (PLO), on Monday said Kerry's ideas on future security arrangements which were presented to the Palestinian leadership last week, had provoked a "real crisis." "These ideas will drive Kerry's efforts to an impasse and to total failure because he is treating our issues with a high degree of indifference," Rabbo told AFP. The proposals focus on security arrangements in the Jordan Valley which runs down the eastern flank of the West Bank, with commentators saying it would allow Israel to maintain a long-term military presence there. But State Department spokeswoman Jen Psaki stressed: "This is not a, 'Here's a plan, please ask for an up or down.'" "This is an ongoing discussion." Kerry's December 11-18 trip will also take him to Vietnam, where he fought as a naval lieutenant in the Vietnam War and to the Philippines. In Vietnam, he will visit Ho Chi Minh City, and the Mekong delta as well as the capital Hanoi. And in the Philippines, a longstanding ally, he will tour the devastated city of Tacloban which was hit by a typhoon last month, as well as meeting Filipino leaders in Manila.
Malians pick new president in crucial run-off