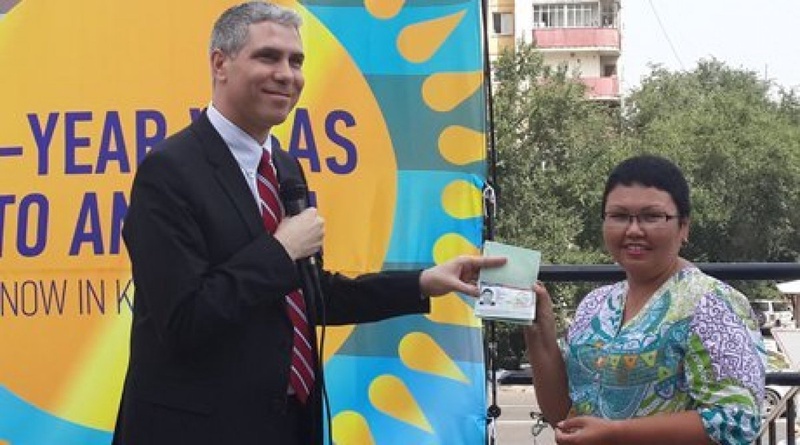 U.S. Consul General to Kazakhstan Michael Snowden. Photo by Roza Yessenkulova©
Kazakhstan has become the first country in Central Asia for the United States to introduce 5-year visas in, Tengrinews.kz reports citing the U.S. Consul General Michael Snowden. “I firmly believe that this will further strengthen and develop our already excellent bilateral relationship. There has never been a better time for citizens of Kazakhstan to visit or study in the United States, and we look forward to welcoming you to our country,” said Snowden. Kazakhstan citizens who were applying for U.S. visas over the past 4 years did not have to come over the embassy for interviews. All they needed was to send their applications and documents by mail. The visa agreement is a result of both governments' work, Snowden said. “August 1 is a historical date. Today we have issued the first 5-year visa,” Snowden said and showed the passport of a Kazakhstan citizen. The woman said she was very happy to be the first holder of an American visa with such a long validity period and added that she was going to the United States to visit her daughter in Houston. According to the Consul General, the visa procedures have not change with the change of the visa term and the consular fees were lowered to $160. “Applying for the 5-year visa one can save around $700,” he said. Snowden explained why Kazakhstan became the only country in Central Asia to receive the privileges: “Kazakhstan citizens holding American visas have been well behaved during their stays in America and have followed all the consular rules. The United State have had no problems related to improper behavior of Kazakhstan citizens,” Snowden said. By Roza Yessenkulova