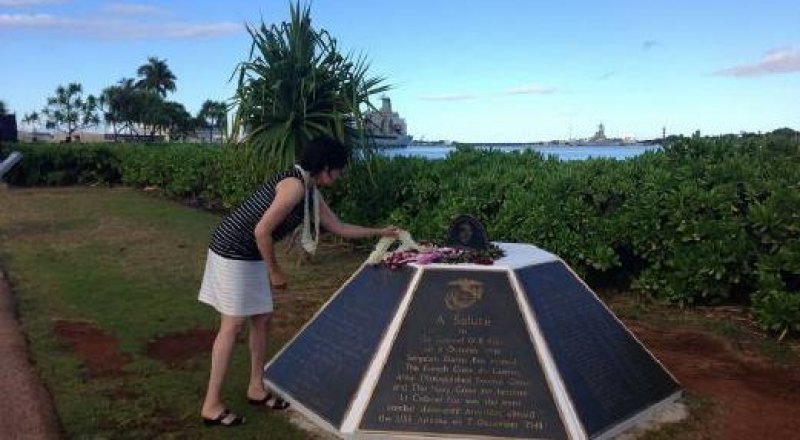 The wife of Prime Minister Shinzo Abe has visited Pearl Harbor, bombed by Japanese planes nearly 75 years ago in an attack that brought the United States into World War II, AFP reports.

It was not clear exactly when Akie Abe made the visit. But she posted 11 pictures on her official Facebook page, apparently early Monday.

"I offered flowers and my prayers at the USS Arizona Memorial at Pearl Harbor," she wrote.

Her visit to the Hawaii memorial came just months after President Barack Obama journeyed to Hiroshima, the Japanese city where a US plane dropped the world's first atom bomb in the closing days of World War II.

But top government spokesman Yoshihide Suga on Monday denied that, while confirming the first lady was in Hawaii for a "private trip".

"There is no such plan for the prime minister to visit Hawaii," Suga said.

On December 7, 1941, Japanese planes swept low over the US naval base, killing more than 2,400 American troops and civilians, a date which then-president Franklin Roosevelt declared would live in "infamy".

The two-hour bombardment of the US Pacific Fleet at anchor sank or damaged some 20 ships and destroyed 164 planes.

Akie Abe is seen in one of the Facebook photos bowing before a wall on which the names of victims are inscribed.

"Many people must have given fresh thought to the bombed city of Hiroshima and the war after President Obama visited the city," she told the Gendai Business web magazine, which apparently accompanied her to Pearl Harbor.

"I am aware that there are various debates and views about Pearl Harbor, but I believe we must go beyond hatred and anger, and pass down these memories to following generations."

Abe is seen in Japan as playing a political role that complements her husband, sometimes by softening his hawkish image and at others by soothing his nationalist supporters.

Her husband has been forced to stay away from the shrine after making a visit there in December 2013.

The visit set off a firestorm of criticism in China and South Korea, and also earned a rare rebuke from top ally the United States.