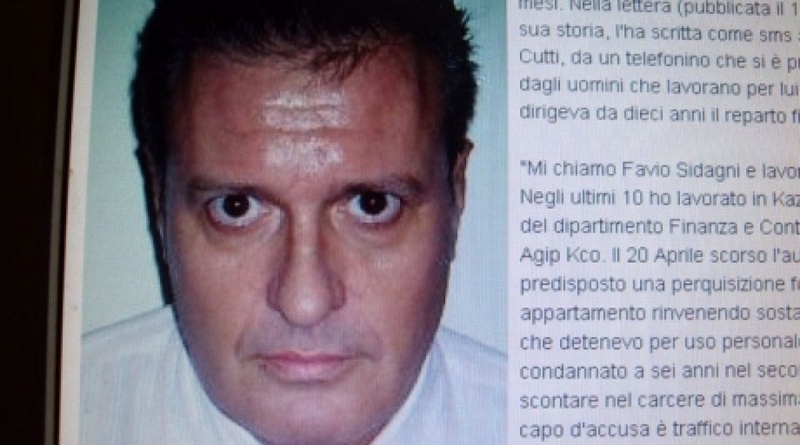 Flavio Sidagni. Photo of La Repubblica.it story.
Kazakhstan Majilis (Lower Chamber of Parliament) is considering a draft agreement on extradition of convicts to and from Italy,
Continuation
1.
Italian ex-top manager released on parole from Kazakhstan prison
2.
Kazakshtan Majilis ratifies extradition agreement with Italy
3.
Kazakhstan Parliament ratifies extradition agreement with Italy
Tengrinews reports. According to Iogan Merkel, First Deputy General Prosecutor of Kazakhstan, with this law in effect the Kazakhstan nationals sentenced in Italy will be able to serve their sentences in their homeland and visa versa. Iogan Merkel specified that there were no Kazakhstanis in Italian prisons, but there was one Italian citizen in a Kazakhstan prison. "The Italian was sentenced under the Article 259 of the Criminal Code of Kazakhstan (illegal production, procession, obtaining, storage, transporting or selling of narcotic or psychotropic substances," Merkel said at today's meeting of the Majilis Committee for Legislation and Legal Reform. This maybe a coincidence, but there is only one known case of an Italian national being convicted for drugs in Kazakhstan. It happened back in 2010. A former financial top manager of Agip Flavio Sidagni, a citizen of Italy, who had worked for 10 years in Kazakhstan, was sentenced to 6 years in prison for drugs. The details of his charges say that "Flavio had a habit of arrange sex parties with prostitutes and drugs in a hotel room of Atyrau city and videotaping the parties. During the parties he mixes smoking drugs and used them together with the girls." The prostitutes were the ones who reported him to the police. After getting his sentence Flavio Sidagni kept asking: "Why did they give me such a long prison term? All I did was use smoking drugs, I wasn't selling them." He said that the judge interpreted the video of him smoking cannabis and passing the pot in a circle as distribution or sales of drugs. Speaking about the Kazakh-Italian extradition agreement that is in the making, the First Deputy General Prosecutor said that if Italy asks for the Italian citizen to be extradited after the agreement is in place, then Italy will have to incur all the related costs. "Italy will send special people, and most probably arrange a chartered flight the way it is usually done, and transport the convict with all due precautions back to Italy," Johan Merkel said. He stressed that in accordance with the treaty Italy would have to adjust the sentence given in Kazakhstan to its legislation before the extradition. "After a sentence is adjusted the court sends its decision to us. If for example, we sentence a person to 7 years in prison and the Italian court gives 3 years for the same felony, than Kazakhstan will not extradite the person back to his or her home country because the punishment is incommensurable. We have had two such cases this year alone (with countries other then Italy), one of them concerned an extradition request from Russia," he said. "Ratification of the agreement between Kazakhstan and Italy is important because Kazakhstan wants to strengthen the legal security of its people, who go abroad, including tourists," he explained. Kazakhstan has already signed extradition treaties with Azerbaijan, Turkmenistan, Ukraine, China, Turkey and Spain. At present Kazakhstan is working on similar agreements with Iran, Vietnam, Saudi Arabia, Hungary, Brazil, Thailand and the UAE. By Renat Tashkinabyev