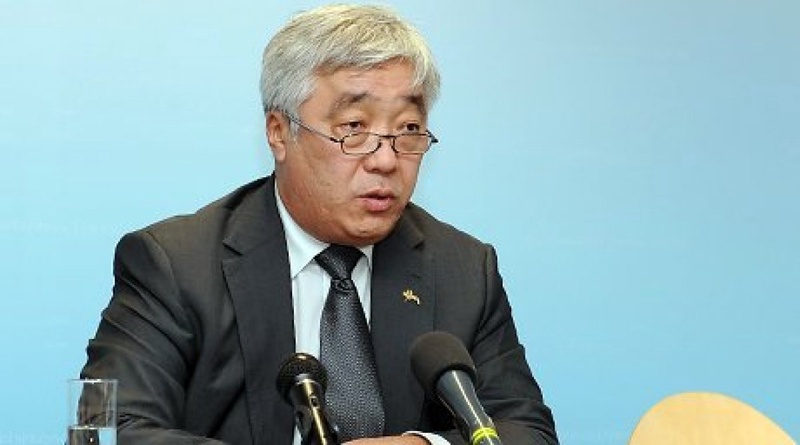 Foreign Minister Erlan Idrissov. © Foreign Ministry
Kazakhstan has a right to defend its reputation against media campaigns run by the exile ex banker Mukhtar Ablyazov who is deliberately tarnishing the nation’s image in the media, relying on illegally obtained money, Interfax-Kazakhstan reports, citing the country’s foreign minister Erlan Idrissov as saying. “I am fully aware of his criticism with regards to [the imprisoned opposition activist] Mr. Kozlov and with regards to [the recent closure of] the supposedly independent Respublika newspaper and K+ TV Channel (…) Let me make it clear who Mr. Mukhtar Ablyazov is. He used to manage BTA, a large bank based in Kazakhstan, and he siphoned off about $6 billion from the bank and illegally had the money transferred out of Kazakhstan: it is an established fact”, Mr. Idrissov said when speaking at the Berlin Eurasian Club. “Mr. Ablyazov started positioning himself in the West as a democracy champion. He committed a grave economic crime. It was proved in Kazakhstan’s courts. Last year there were some court verdicts establishing his guilt in the UK courts. One should be aware that having stolen the money, he is spending a sizable amount to create an empire that would support him in the West; this empire is flexibly carrying out his campaign to create a picture that many now believe in; at the same time he is supporting similar structures in Kazakhstan”, the minister said. “So, Mr. Kozlov is not a genuine opposition activist. Respublika newspaper is not a truly independent newspaper. K+ isn’t a truly independent channel. These are special tools created by Mr. Ablyazov to pinpointedly attack Kazakhstan. We classify the situation around Mr. Ablyazov and the [media and opposition] structures involved as a special campaign orchestrated by Mr. Ablyazov against Kazakhstan. Therefore Kazakhstan does have the right to defend itself against this campaign”, Mr. Idrissov emphasized. Late 2012 the Almaty Prosecutor Office demanded to ban Alga and Khalyk Maidany parties as extremist ones and to close down about 40 opposition media: 8 newspapers, 23 Internet-based Respublika newspaper websites and their mirrors, K+ and Stan-TV channels. Despite protests on the part of opposition and human rights campaigners, within a month courts enforced the Prosecutor Office’s demands. In October 2012 Vladimir Kozlov, leader of the Alga opposition party, was found guilty of running a criminal group, stirring up social strife and calling to overthrow the current regime in Zhanaozen, a town in West Kazakhstan where in December 2011 a mass unrest resulted in death of 15 people with over 100 people injured. Mr. Kozlov was sentenced to 7.5 years in prison.