Francois Hollande putting on a Kazakh costume provoked a flurry of Internet jokes, some comparing the French leader to Borat. Was it really a bad fashion choice?
09 декабря 2014, 18:20
Новостью поделились: человек
©riafan.ru

French President Francois Hollande tried on a traditional Kazakh costume during his official visit to Astana. The coat called “shapan” and a fur hat were given to the French leader as a sign of respect and hospitality. Hollande has returned the gesture by trying it on and posing for a photo.

Everything appeared pretty decent and within the accepted diplomatic boundaries. After all, why not share a bit of culture with the country you had just agreed on entering several major trade deals and deepen strategic cooperation with.

But it looks like the ethnic costume Hollande was wearing caught more attention that the several days of negotiations and diplomatic work.

The photo taken by an official photographer of Kazakhstan President Nursultan Nazarbayev on Friday was posted on the Instagram account of the presidential press service. However, it was removed after the French presidential palace saw it trigger an unexpected and unpleasant spin throughout the Internet and requested the photo to be taken down.

Nevertheless, the photo kept on spreading through the Web and has served as an inspiration for a snowball of Internet jokes and memes.

One of this jokes likened Francois Hollande in a Kazakh fur hat to Borat. 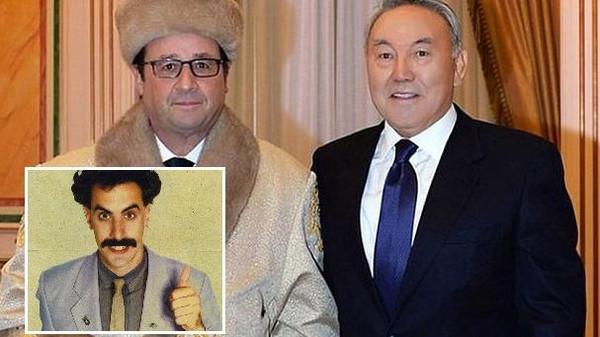 It is a fact that the French President’s image at home is all but spectacular. According to a poll in September, only 13 percent of French people were satisfied with his performance as president. The European country's  economy is in crisis and unemployment is high.

The President also has a history of unfortunate photos, including the one in which he was seen leaving the apartment of his lover, while keeping a different First Lady in the Elysee Palace.

It appears the French have a reason to be upset with Hollande or disapprove of his policies. However, offending traditions and customs of other nations along the way is not quite fair and probably not something the French want to be associated with. There is a thin line between humor, satire and offence, which is why there is quite a lot of ambiguity with this fur hat case. Should the Kazakhs take offence? Is the comparison to Borat a step too far?

Professor of Ancient and Medieval History of Kazakhstan at the Al-Farabi Kazakh National University Talas Omarbekov said that Hollande trying on the Kazakh coat “shapan” was intended to symbolize friendship and hospitality between the two nations.

According to the historian, the custom originated in the times of the ancient Saka. "The tradition has deep roots. Look at the clothing of the Golden Man. It is obvious that they paid special attention to clothes back then, especially if it was a leader," Omarbekov said.

He added that national costumes were presented only to friendly nations to show the hospitality of nomadic people and respect. Nomadic tribes also accepted national clothing as gifts from other nations. Such encounters are documented in the Chinese chronicles, the Professor said.

Currently, dressing political guests in traditional costumes is nothing out of the common way. For example, during the summit of the Asia-Pacific Economic Cooperation (APEC), world leaders happily put on the garments of the hosting country.

These, too, sometimes provoke Internet jokes. Such was the case with the latest summit in Beijing, when users found the clothing provided by the Chinese hosts similar to Star Trek fleet uniforms.

However, there is something strangely odd about comparing Francois Hollande in a Kazakh costume to Borat, a caricature figure intended to mock ordinary Americans on the streets. Supposedly, everyone watching the film understood that Borat was not really a Kazakh TV host but a reflection of how some Western viewers see the “rest” of the world. Then, why link an actual long Kazakh tradition to the purposefully idiotic character of Borat?

The French Embassy in Kazakhstan declined to comment on the issue but one thing is clear: the hat and the coat have clearly outshined all the political and economic issues discussed in Kazakhstan.

Meanwhile, Francois Hollande can rest assured that he was not the first to wear traditional Kazakh clothing.