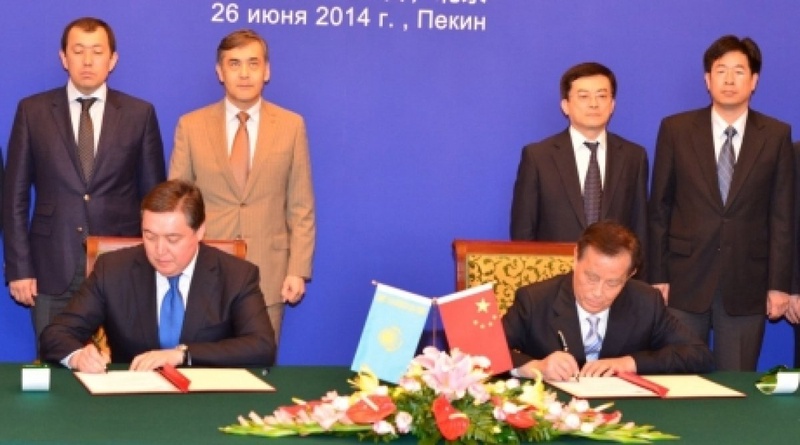 Kazakhstan and China are advancing the creation of a new Silk Road economic belt.

On 26 June, a meeting took place in Beijing, where the President of Kazakhstan Temir Zholy, Kazakhstan's national railway company, Askar Mamin was invited by his Chinese colleagues to meet with the general manager of China Railway Corporation Sheng Guangzu, Tengrinews reports citing the press service of the Kazakhstani company. The meeting was also attended by Nurlan Yermekbayev, Ambassador Extraordinary and Plenipotentiary of Kazakhstan to China.

Sheng and Mamin agreed to sign an agreement on cooperation between Kazakhstan Temir Joly and Chinese Railways Corp, considering the ongoing structural reform in China's railways. The document will reflect conceptual directions of bilateral cooperation in railway transportation for a medium term. The parties signed a protocol following the meeting.

The Kazakh side informed about the beginning of operation of the Kazakh-Chinese terminal in the port of Lianyungang and opening of a sales office in Hong Kong.

The parties expressed their intention to further increase the competitiveness of Eurasian rail transportation corridors and attract freights. They decided to establish competitive tariffs, increase the speed of delivery of goods through the territories of their countries and organize container trains on solid schedule lines.

In order to achieve the set objectives, a joint work group of competent professionals at the level of deputy heads of the country’s railways was created. Among other objectives, the group is going to work towards loading the railways to fully use the transit capacity, improving the efficiency of Dostyk – Alashankou and Altynkol – Khorgos border crossings, introducing new technologies to streamline cargo transportation, and accelerating the implementation of electronic data interchange.

The importance of the corridor is evident from the scale of freight volumes. The parties discussed the implementation of the transportation plan for 2013 that saw 19.5 million tons of cargoes transported, which was 17 percent more than in 2012. The parties noted that the level of container traffic exceeded 215,000 TEUs (twenty-foot equivalent unit), constituting an increase of 27 percent as compared to the figure of 2012 from China to Kazakhstan and beyond. In particular, the growth of container traffic from China to the European Union made 84 percent.