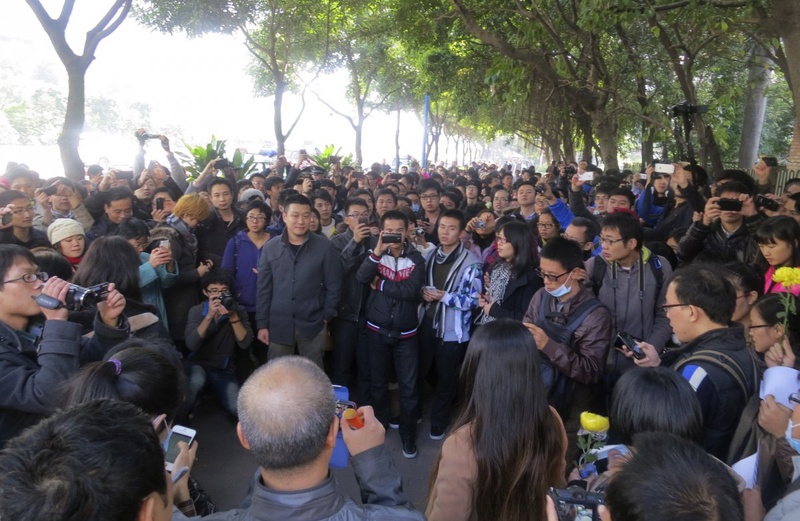 Demonstrators gather along a street near the headquarters of Southern Weekly newspaper. ©REUTERS
China's blogosphere and celebrities -- many with millions of followers -- Tuesday backed journalists at a newspaper embroiled in a censorship row after hundreds of people held a rare protest demanding greater press freedom, AFP reports. The support came after hundreds of people in Guangzhou gathered Monday at the office of Southern Weekly, a popular liberal newspaper which had an article urging reforms to uphold people's rights censored by an official. Wang Keqin, an investigative reporter on another newspaper, posted Tuesday on China's Twitter-like Weibo service: "A black hand closes heavy, black curtain, blocking brightness and fresh air as there is no weekend any more in the south." The paper's Chinese name translates as Southern Weekend but it is widely known as Southern Weekly in English. Yao Chen, an actress who has 32 million followers on her Weibo account, earlier posted the paper's logo and quoted Russian dissident Alexandr Solzhenitsyn: "One word of truth shall outweigh the whole world". Fellow actor Chen Kun, who has 27 million followers, replied: "I am not that deep, and don't play with words, I support the friends at Southern Weekly". The dispute over Southern Weekly comes amid pledges of change from the new leadership, headed by president-in-waiting Xi Jinping, which has promised a more open style of governance since the Communist Party congress in November. Chinese media outlets are subject to directives from government propaganda departments, which often suppress news seen as negative by the ruling Communist Party, but some publications take a more critical stance. Police allowed Monday's demonstration, which mainly included young people carrying posters and scattering chrysanthemums, a flower used at funerals in China which has become the protesters' symbol for the loss of press freedom. The gathering followed an open letter from newspaper's staff which called for the resignation of provincial propaganda official Tuo Zhen, who was said to have removed the New Year message and replaced it with a weaker article. Another letter, signed by scores of prominent academics from across China, emerged over the weekend calling for the immediate removal of Tuo and for greater press freedom. Prominent dissident Hu Jia posted a photo of himself at the paper's Beijing office on Monday evening, calling himself one of many who visited to show support. Blogger Li Chengpeng, who has 6.5 million followers, wrote: "We don't need tall buildings... the world's second largest GDP... aircraft carriers, but we need a newspaper that speaks the truth. He continued: "All the major countries that command respect in the world have a newspaper that is permitted to speak the truth." A commentary in the English-language Global Times, which is close to the ruling party, on Tuesday said authorities would not allow radical changes in media policy. "The country is unlikely to have the 'absolutely free media' that is dreamed of by those activists," it said. "The Southern Weekly issue will not be concluded with a surprise ending."