For the last day more than 18 centimeters of snow has precipitated in the city, which is abnormal for the Southern capital.
20 ноября 2016, 17:05
Новостью поделились: человек
© Akimat almaty in instagram

According to the city administration, for the last day more than 18 centimeters of snow has precipitated in the city, which is abnormal for the Southern capital, where snowfalls are typically short and the medium level is usually 5-7 centimeters. It also reported that the level of snow exceeded the usual rate in the mountains. According to the latest data in Almaty area the snow depth reached 32 centimeters, in the foothills - 60 centimeters (at a normal rate of no more than 15-20 cm). 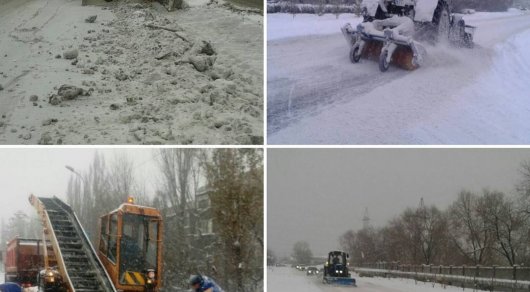 "The snow removal involves all municipal and emergency services of the city. At the moment, about 1,300 road workers and 600 units of construction equipment are engaged. Since 8 am to clean the city, more than 4.5 thousand people and more than 800 units of special equipment have been  involved. In order to combat the effects of bad weather 75 thousand tons of ice-melting chemicals will be used ", - Akimat of Almaty press service said.

Almaty Akimat press service continues to publish videos of snow removal process in social networks. Meanwhile, in the comments to the posts people point out that no snow removal works are seen in the city and the roads are still covered in snow.