Autopilot failed in AN-72 that crashed near Shymkent 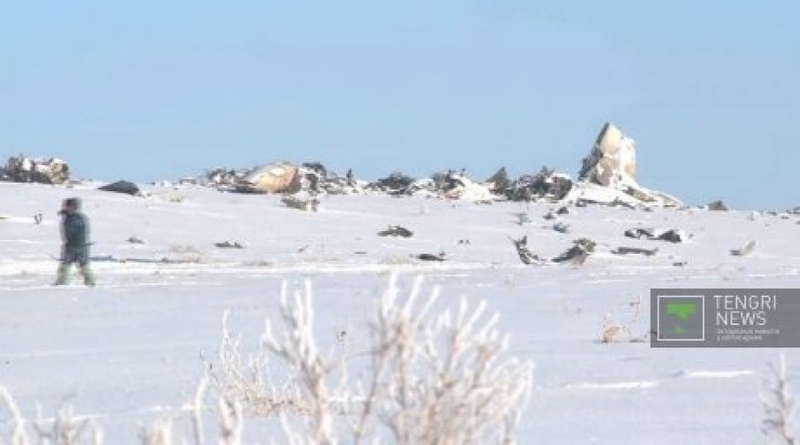 At the accident site. Snapshot of the video. ©Tengrinews.kz
The autopilot failed in the AN-72 aircraft that crashed in Kazakhstan while transporting militarymen and claimed 28 lives. The General Prosecutor’s Office has publicized results of the investigation into the crash of AN-72 near to Shymkent in south Kazakhstan, Tengrinews.kz reports citing the official representative of Kazakhstan General Prosecutor’s Office Nurdaulet Suindikov. “The aircraft took off from Astana airport heading to Shymkent at 04:52 p.m. on December 25, 2012. The crew passed the required medical tests before the flight and was approved for the flight. The physical-chemical test of the fluids added to the jet fuel in winter was performed and the experts declared it fit and not having impurities or foreign additives. The takeoff went normal and the crew did not transmit any messages on failing equipment. "The decoded record of the pilots’ conversations shows that the autopilot failed shortly after the takeoff. The pilot-in-command continued the flight manually, which did not contradict with the guidelines for flight exploitation of AN-72 aircrafts. He passed the airplane control to his assistant, which is forbidden during transportation of passengers. The assistant is the second pilot. "Based on the flight data recorder it was found that the aircraft's radio altimeter (terrain clearance radar) failed 2 minutes and 40 seconds after the takeoff, while Terrain Awareness and Warning System was not turned on,” Suindikov said. “They continued the flight based on the Baroset (pressure-operated devices for altitude measurement). According to the preliminary investigation, there was a number of failures in the work of the pressure-operated altimeter during the flight as well. "The pilots’ conversations revealed that the aircraft was suffering from icing. The plane started landing at 06:31 p.m. The crew’s conversations, reports of the weather services and testimonies of witnesses certify that AN-72 was landing in bad weather conditions and poor visibility. "The investigation found that the pilot-in-command failed to follow the instructions of the dispatcher who instructed him to set the pressure of Shymkent airport at the pressure-operated altimeter before the landing. As a result, the altimeter's margin of error made up to 385 meters during the landing. "The plane crashed into a slope of a ravine at 06:54 p.m. 21km from Shymkent airport’s check point,” Suindikov said. The AN-72 military plane of the Border Control Service of Kazakhstan National Security Commission crashed on December 25. The plane had 7 crew members and 20 militarymen onboard, including the acting head of the Border Control Service of Kazakhstan National Security Commission Turganbek Stambekov. Fragment of conversations of AN-72 crew By Renat Tashkinbayev http://tengrinews.kz/kazakhstan_news/u-poterpevshego-katastrofu-an-72-v-yuko-otkazal-avtopilot-227095/