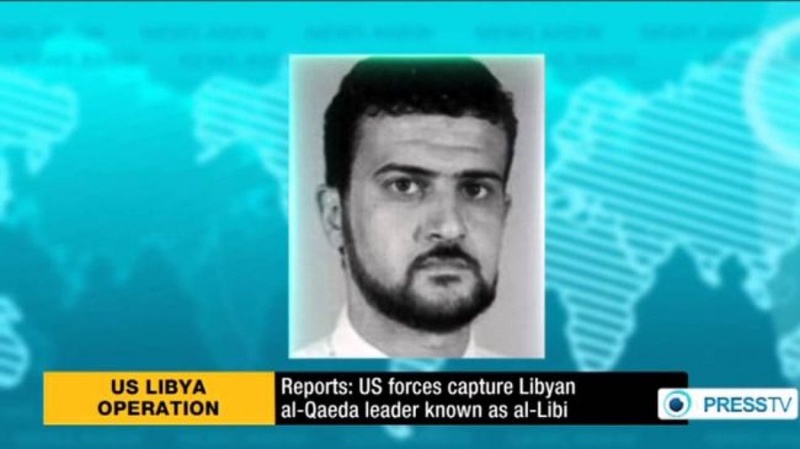 Abu Anas al-Libi. Photo courtesy of presstv.ir
The US military was holding and secretly interrogating an alleged Al-Qaeda operative Monday, after weekend raids on Libya and Somalia which also targeted an elusive Islamist Shebab commander, AFP reports. Abu Anas al-Libi, 49, was captured by special forces in Tripoli on Saturday and is now "lawfully detained by the United States military in a secure location outside of Libya," a senior US official said. Libi, who was on the FBI's most wanted list with a $5 million bounty on his head for his alleged role in the 1998 twin bombings of US embassies in East Africa, has been taken to a US Navy warship in the region, an official told AFP. The New York Times said he was on board the USS San Antonio, an amphibious transport currently deployed in the Mediterranean. The Pentagon, meanwhile, revealed that US Navy SEALs had been hunting a top commander of Somalia's Shebab rebel group in a separate weekend raid on the southern Somali port of Barawe. Abdulkadir Mohamed Abdulkadir, a Kenyan of Somali origin who fights for the Shebab under the alias "Ikrima," was the target of Saturday's strike. His fate remains unclear however, as Pentagon spokesman George Little said: "The operation did not result in Ikrima's capture." Military officials thought it was likely he had been killed but the elite SEALs had been forced to withdraw before they could confirm his death, some US media reported. A Shebab commander told AFP that a foreign fighter and two Somali militants had been in the beachfront villa when the American forces sought to storm the house. Moalim Abdirahman Abu-Isa, a commander for the group in Barawe, said one Shebab militant was killed in the attack, adding that several US commandos could have been wounded. "Three mujahedeen fighters, one of them a non-Somali brother, stayed in the house when it was attacked but they have shown incredible bravery and resisted the enemy," Abu-Isa said. The Pentagon has said there were no US casualties in either operation and Little said the Somalia raid had been carried out with "unparalleled precision." "The United States military has unmatched capabilities and could rely on any of them to disrupt terrorist networks and plots," he warned. The Kenyan is linked with two Al-Qaeda operatives, now dead, who also played roles in the 1998 bombings of US embassies in Kenya and Tanzania. State Department deputy spokeswoman Marie Harf said both operations showed not only America's global reach but also that it "doesn't forget when its citizens are killed, injured, targeted by terrorists, even sometimes when it takes a while because these are tough targets to find." She stressed however that when going after suspects the US aims to capture them, partly "because of the intelligence that's gained." The raid in Somali followed last month's siege -- claimed by the Shebab -- of an upscale shopping mall in the Kenyan capital Nairobi, in which 67 people were killed. Ikrima, identified as a top Shebab planner, was not linked to that attack but the raid was prompted by fears that he could be planning a similar assault on Western targets, the Times said. US Secretary of State John Kerry said the capture of Libi, which Tripoli angrily denounced as "the kidnap" of a Libyan citizen, was legal under US law, describing him as "a legal and an appropriate target for the US military." Libi had committed "acts of terror" and had been "appropriately indicted by courts of law, by the legal process," Kerry told reporters at an Asia-Pacific summit in Indonesia. But asked if the US had informed Libya before the raid, Kerry refused to go into specifics. Libi was indicted in the US federal court in New York for allegedly playing a key role in the east Africa bombings -- which left more than 200 dead -- and plots to attack US forces. The arrest of Libi, whose given name is Nazih Abdul Hamed al-Raghie, paves the way for his extradition to New York to face trial, although US officials did not confirm when or if that would happen. Citing surveillance footage, Libi's son Abdullah al-Raghie said his father had been seized by masked men armed with pistols, claiming the Libyan government was implicated. Tripoli denies the accusation.