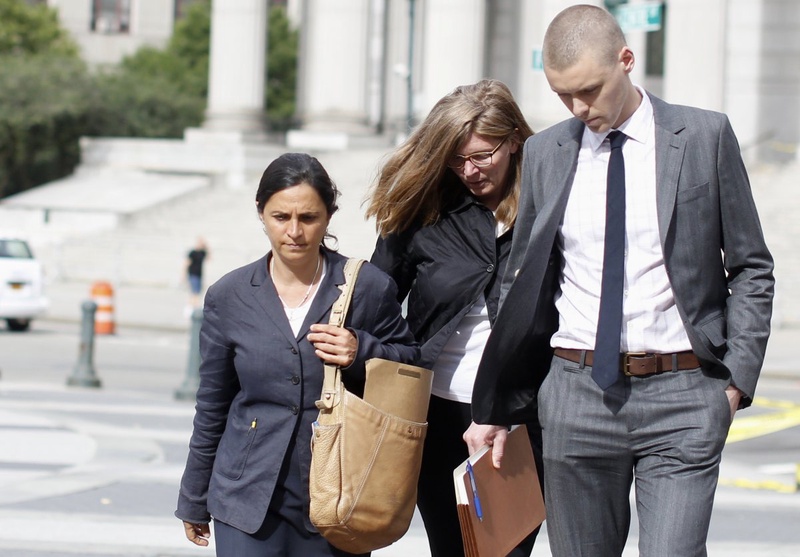 Ingrid Lederhaas-Okun (C) departs Manhattan Federal Court with her lawyer. ©REUTERS/Brendan McDermid
A former executive of iconic New York jewelry store Tiffany was arrested on Tuesday for stealing more than $1 million worth of valuables which she later resold, AFP reports citing federal prosecutors. Ingrid Lederhaas-Okun, Tiffany's former vice-president of product development, swiped 165 items of jewelry between November 2012 and February 2013, when she left the firm. In her role as vice-president of product development, Lederhaas-Okun had the authority to take items of Tiffany jewelry off-site to show to potential manufacturers to determine how much they would cost to produce. The 46-year-old later sold the haul -- which included gold and diamond encrusted bracelets, platinum and gold earrings and gold rings -- to another jeweler for $1.3 million, claiming the property as her own. Lederhaas-Okun's alleged crimes were unearthed in February after she was fired from the company and officials realized a vast inventory of items was missing. Lederhaas-Okun denied any wrongdoing after her arrest, claiming the items in question were variously lost, or still in her former office. However she was implicated by emails which contradicted her version of events and others which indicated she had sold the jewelry, a New York police report revealed on Tuesday. Manhattan US Attorney Preet Bharara said in a statement that Lederhaas-Okun had gone "from a vice-president at a high-end jewelry company to a jewel thief." "She abused her access to valuable jewelry in order to steal and then resell over one million dollars worth of items that she falsely represented as her own, as the complaint describes," Bharara said. "Her arrest shows that no matter how privileged their position in a company, employees who steal will face the full consequences of the law." The former executive could face up to 30 years in prison if convicted.