Container traffic between Europe and Asia through Kazakhstan grows 61% 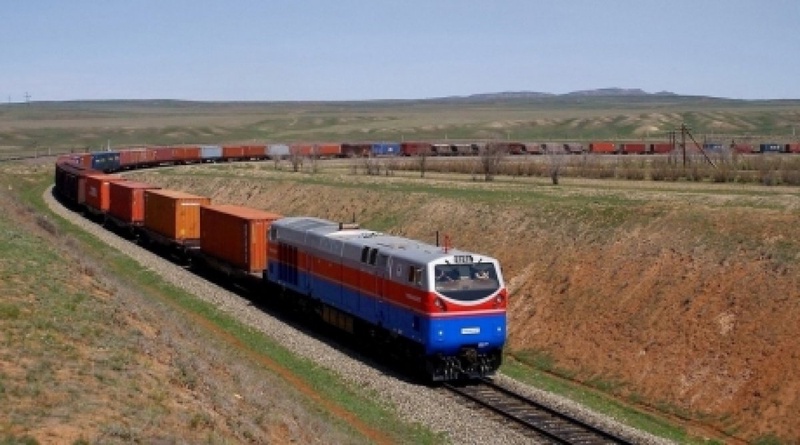 Container train
Kazakhstan national railway operator Kazakhstan Temir Zholy transported more than 16 million tons of cargoes by rail in 2013 and its container traffic grew 4% against the previous year, the company's president Askar Mamin told Tengrinews. The container shipments made 270 thousand TEU (twenty-foot equivalent units) in 2013. Transit container traffic flow between Europe and Asia through Kazakhstan reached 5,630 TEU in 2013, which is 61% more than in 2012. It 2012 the transit made 3,490 TEU. "The shipments were made using high-speed container trains running on fixed schedules with an average speed of 997km per day. And at some sections - Chongqing-Dostyk-Duisburg and Chengdu-Dostyk-Lodzin - their speed reached 1100km per day," Mamin said. 1,653 container trains were running in Kazakhstan in 2013, which is 24% more than in 2012. Their intensity reached 5 trains per day. Speaking of most recent developments he reminded that a new regular container train route between Chinese Xi'an city and the Kazakhstan border was launched in December 2013, and three more important high-speed train routes -- Xi'an - Uzbekistan (via Kazakhstan), Shenzhen - Kazakhstan and Lianyungang - Kazakhstan -- will be opened in 2014. It is planned to increase the container train traffic in Kazakhstan by another 20% in 2014. It is expected that railway freight traffic between Kazakhstan and China is going to reach 21.5 million tons in 2014, with 17.5 million tons going through Kazakhstan’s Dostyk railway border crossing and 4 million tons via Chinese Altynkol crossing.