700 workers constructing Abu Dhabi Plaza in Astana out on strike 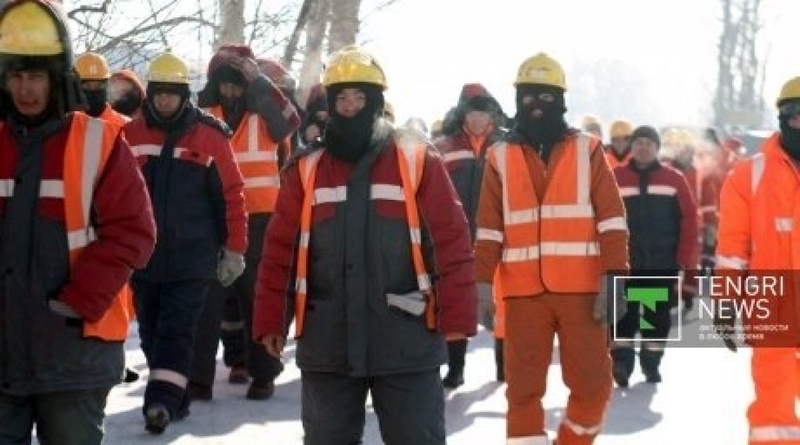 ©Marat Abilov
Around 700 workers constructing Abu Dhabi Plaza in Astana have stopped working and gathered near Arabtec Holding headquarters this afternoon, Tengrinews reports. They are demanding a salary rise. According to the workers, the company has kept their wages low for five months and when their asked for a rise all they got were promises. So they came out on strike to demand that their bosses finely act on their promises. Arabtech Holding won the contract to construct the spectacular 88-storey complex in 2013. It is a staged matrix of buildings with retail and leisure venues, a hotel and a series of office and residential towers that will create a new landmark on Astana skyline. The grand project is worth 1.6 billion dollars and is fully funded by investors from the United Arab Emirates. The construction is due to be completed by November 2016, before the EXPO-2017. "We are getting our salaries based on man-hours rates - 300 tenge per hour. The minimal wages of unskilled workers are now at 60 thousand tenge ($385). Those who work overtime and on weekends can bring it to 80 thousand tenge ($515), but no higher. That is not enough to make a living. Skilled workers can earn as much as 120-130 thousand tenge ($770-835). "We want a mark-up of 100 tenge per hour to bring the minimal wages of unskilled workers to 150 thousand ($965) and those of skilled workers to 170 ($1090) or 180 thousand ($1150)," one of the construction workers Talgat Bisekenov explained. "We have met with the bosses and they promised us to deal with our problem. Ramzi Barghout promised us," he said. Ramzi Barghout is the Project Manager of the Consolidated Contractors International Company working on Abu Dhabi Plaza Project in Astana. "They say they will increase our wages by 7-8%, this is a very small mark-up. We all have loans to repay, we have to pay the rent. There is not other way for us (except going going on a strike). They only promise," he said. After obtaining the Friday deadline from the company the worker returned back to work. They promise to write a letter to the Labor Ministry if the company does not act on its promises on Friday. And if the Ministry doesn't help them they are ready to go back to striking. Executive Director of Arabtec Holding Murat Zhumanov said that the workers acted in violations of rules of settlement of labor conflicts. "The man-hour rate that they are asking to increase are is compliance with the legislation. Besides, they get accommodation, catering and transport to work as bonuses. We have three dormitory hotels that accommodate 600 people. Those who rent housing get a supplement of 20 thousand tenge ($130) to partly compensate their expenses. "We will consider their demands by Friday, they will get their mark-up. Out of 1000 people only around 200 people are discontent," Zhumanov said. The construction is currently at the foundation pit stage. Around 1000 people are working at the construction site at this stage.