Have you heard the sound of jetigen? It is a Kazakh many-stringed harp-like instrument that is similar to Russian gusli.
30 мая 2014, 00:41
Новостью поделились: человек
Photo © Alisher Akhmetov

Have you heard the sound of jetigen? It is a Kazakh many-stringed harp-like instrument that is similar to Russian gusli. Traditionally it had seven strings, but as time when by their number has grown to 23. Eventually an contemporary version of the instrument appeared. It took 12 people, 4 month and spare parts from different counties to assemble the first ever electric jetigen in Moscow.

The front man of Adlaspan band Nurzhan Toishy is the inventor and the mastermind behind the new instrument. 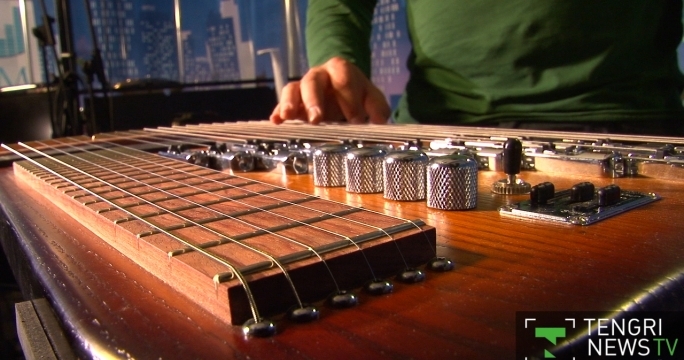 The electric jetigen allows to modify the sound on the go. In addition, the instrument can be connected to a sound amplifier.

This is how a traditional jetigen looks like. Similar instruments are used by various nationalities in Eurasia.

Sharapat band will perform on the electric jetigen at The Spirit of Tengri. According to Toishy, the new band consists of “a drummer, a bass dombra player, a lead dombra player and the singer who will also be playingjetigen”.

The creator of the unique instrument added that one of the peculiarities of an electronic jetigen is its long-resonating sound. “The professionalism of a jetigen player is not in attacking the strings, but rather in timely toning them down,” Toishy said.

He recommended playing an electric jetigen while keeping the instrument at an angle, like Russian gusli players do.

According to Toishy, one can play a great variety of songs on the modified instrument.

Sharapat band has been rehearsing for several months using a traditional jetigen as a preparation for the upcoming ethnic music festival.

The festival will take place on June 7 on the Republic Palace square on the corner of Abay Avenue and Dostyk Ave.

Musicians and singers from Japan, Buryatia, Yakutia, Austria, Ecuador and other countries will perform at the festival alongside Kazakhstani ethnic artists. All in all, the festival brings 12 bands.