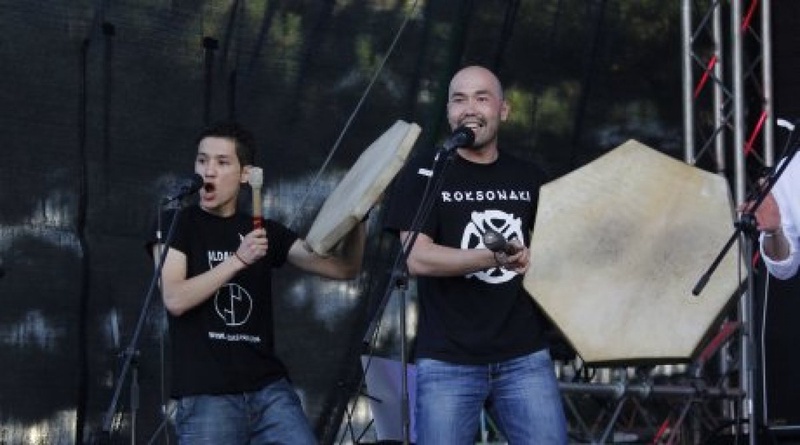 Roksonaki. Photo by Dmitriy Khegai©
First International Festival of Contemporary Ethnic Music
Continuation
1.
The Spirit of Tengri: taste of world ethnic music in Almaty
The Spirit of Tengri was held in Almaty, Tengrinews.kz reports. 11 bands from all around Eurasia took the stage at the Festival. Tengri FM national radio and STV channel organized the spectacular event. According to the radio’s Director Madina Umorbekova, one of the main goals of the festival was to present contemporary ethnic music to the audience. Contemporary ethnic music frequently scares people away as people often mistakenly believe that it sounds like traditional ethnic music, but once they start to listen, it dazzles them from the very first sounds. The ethnic music festival will become an annual event, she said. Kazakhstan was represented by Aldaspan band, ethnic-folk band Hapanasasa, zhetygen virtuous player Korlan and singer Naiya. The festival was opened by Kazakhstan rock veterans Roksonaki. Argymak band from Bashkortastan played Bashkir reggae and their own version Kara Zhorga. The Bashkir version of the composition is totally different from the music that accompanies the famous Kazakh dance Kara Zhorga. The performers also played Bashkir rock. According to the band’s frontman Renat Ramazanov, the band plays modern versions of traditional folk music. Ethnic music is a good way to remind people about their roots, he said. The Spirit of Tengri also included spectacular performances of Namgar band from Buryatiya famous for their unique sounds, Tuva singer Sainkho Namchylak together with DJ Dickson Dee from Hong Kong, Argymak band from Bashkortastan, Chyltys Tannagasheva from Mountain Shoriya, virtuous khomuz player Yuliana from Yakutiya, Gulzada from Kyrgyzstan and multi-instrument player Bolot Bairyshev from Altai. According to the president of Alash Media Group Batyr Kazybayev, ethnic music is a rich historical layer that is oftern not paid proper attention. “Remembering, restoring and reconstructing the great heritage and culture of the people sharing the same Tengri (sky) is very important for the national identity of all the people who have resided and still reside at the Eurasian continent. This is a very rich cultural layer that is full of unforgettable experience for almost everyone who touches it. Remembering the roots is very important for Kazakhstan that is the only nation among the steppe people of the Eurasian continent that has obtained its independence,” Kazybayev said. By Assemgul Kassenova