World bows in respect to Mandela 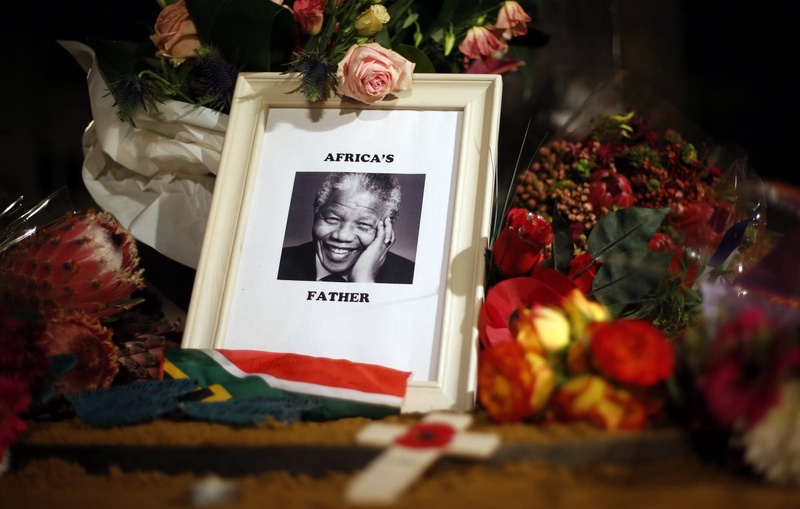 Flowers and tributes are left on the Nelson Mandela statue on Parliament Square in London December 6, 2013. ©Reuters/Suzanne Plunkett

The death of South Africa's liberation leader Nelson Mandela has unleashed a heartfelt chorus of awed respect from across the worlds of politics, religion, sport and culture. Statesmen, resistance leaders, Nobel laureates and prisoners of conscience have died before, but never has one man united such global unity in honoring his passing. Foreshadowing the guest list of what will surely be the most important funeral of recent decades, world leaders queued up to issue solemn tributes to the 95-year-old anti-apartheid hero who became South Africa's first democratic president. "He no longer belongs to us; he belongs to the ages," Barack Obama, America's first black president, said in a deliberate echo of an early tribute paid to Abraham Lincoln, the president who emancipated the slaves. 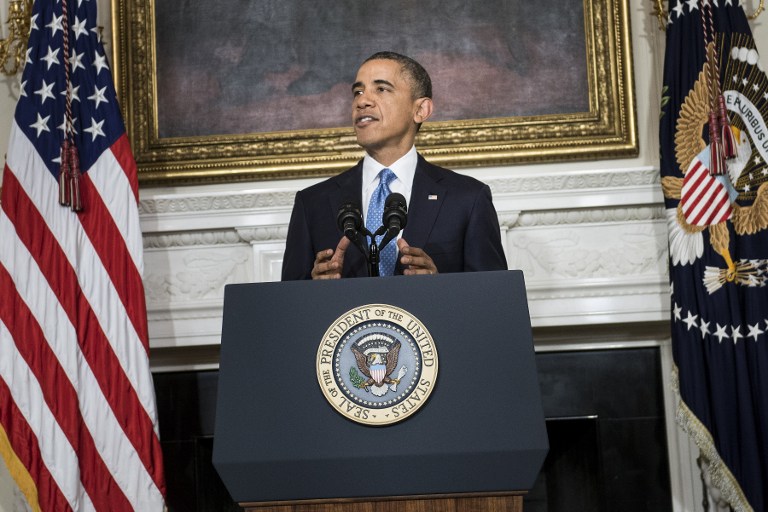 US President Barack Obama makes a statement on the death of former South African President Nelson Mandela in the briefing room of the White House on December 5, 2013 in Washington, DC. Obama described Mandela, who died at 95, as "influential, courageous and profoundly good." ©AFP

Over and over, leaders returned to the dignity Mandela displayed during his long imprisonment by South Africa's former racist regime and then later, when he led his country to majority rule. Obama ordered US flags at the White House and other public buildings flown at half-mast until Monday, in a rare tribute to a foreign leader. United Nations Secretary General Ban Ki-moon declared Mandela a "giant for justice." "Many around the world were influenced by his selfless struggle for human dignity, equality and freedom. He touched our lives in deeply personal ways," Ban told reporters. British Prime Minister David Cameron, who in 2006 apologized for what he said were the "mistakes" of his Conservative Party in its response to apartheid in Britain's former colony, was also moved. "A great light has gone out in the world," he said in Downing Street. "Nelson Mandela was a towering figure in our time; a legend in life and now in death -- a true global hero." French Prime Minister Jean-Marc Ayrault, in China on an official visit, said Mandela would "long be an inspiration to all of humanity" as his government also ordered flags to fly at half-mast. India's premier Manmohan Singh hailed the anti-apartheid icon as a "true Gandhian" who would continue to inspire future generations after his death, while Nigeria's President Goodluck Jonathan dubbed Mandela "one of mankind's greatest liberators." Retired political leaders who remembered Mandela during his 27 years of imprisonment or worked with him after his 1990 release were also effusive. Former US president Bill Clinton tweeted a picture of himself with his "friend", and said: "Today the world has lost one of its most important leaders and one of its finest human beings." The courage to change the world Mandela won the Nobel Peace Prize in 1993, shared with South Africa's last apartheid leader F.W. de Klerk for their role in ensuring a peaceful transition to elected rule. De Klerk said though his relationship with Mandela was "often stormy," they were "always able to come together at critical moments." Another Nobel laureate paying tribute was Myanmar opposition leader Aung San Suu Kyi, who like Mandela spent many years in detention. She lamented the passing of a "great human being who... made us understand that we can change the world". The Dalai Lama said he would miss a "dear friend." "The best tribute we can pay to him is to do whatever we can to contribute to honouring the oneness of humanity and working for peace and reconciliation as he did," said the exiled Tibetan spiritual leader. Business and religious leaders, the heads of international agencies, writers, thinkers, entertainers, sports personalities and activists also joined the outpouring of emotion. Microsoft founder Bill Gates, who has turned over his business acumen and part of his fortune to battling disease in Africa, said he and his wife had been personally inspired. "Every time Melinda and I met Nelson Mandela, we left more inspired than ever. His grace and courage changed the world. This is a sad day," Gates said. 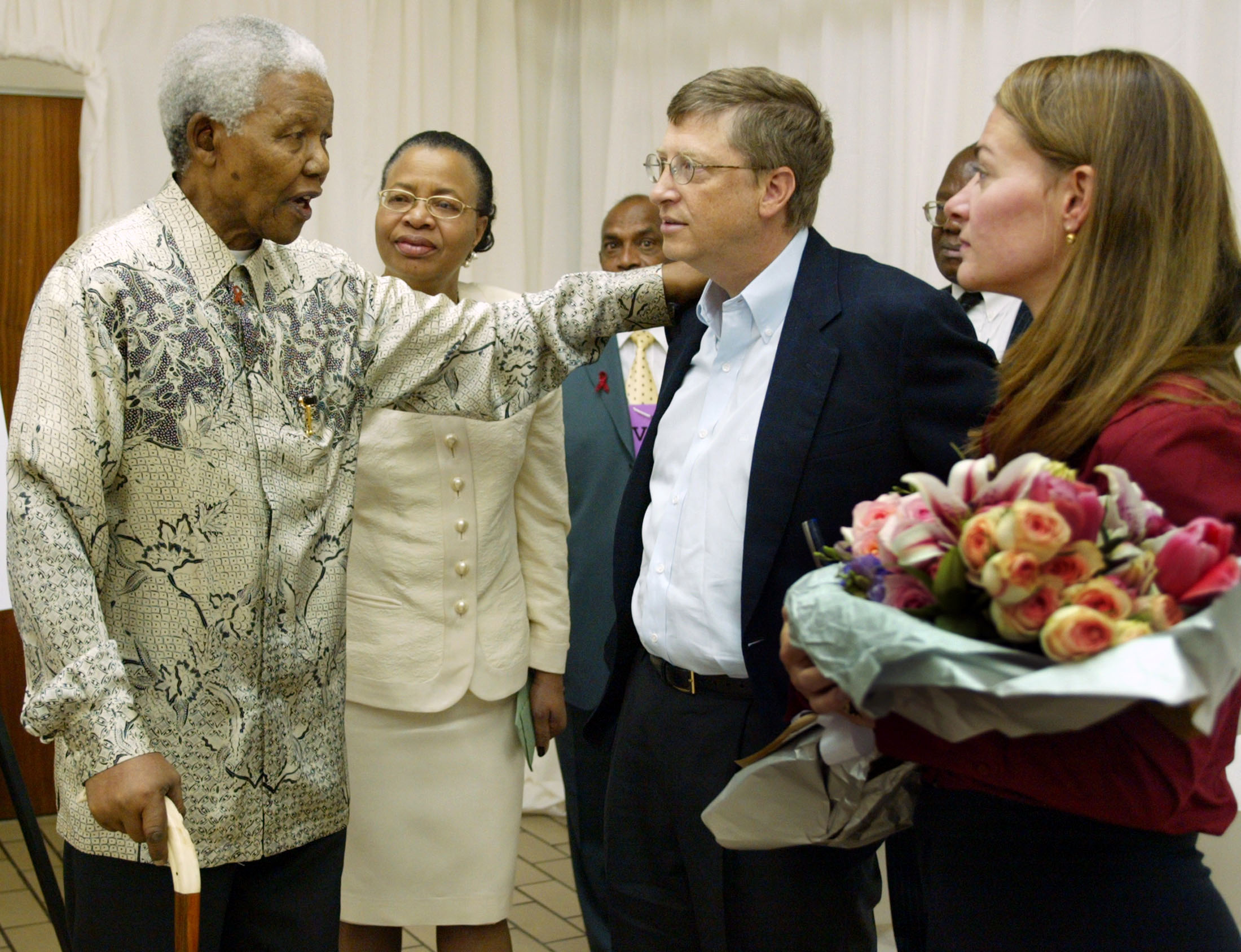 Former South African President Nelson Mandela (L) and his wife Graca Machel talk to Bill and Melinda Gates (R) at the end of a youth forum on HIV/AIDS at the University of Witwatersrand in Johannesburg, South Africa September 22, 2003. ©Reuters/Jeff Christensen

There were also tributes from Hollywood, where a new movie based on the South African leader's autobiography "Long Walk to Freedom" has just been released.

"What an honor it was to step into the shoes of Nelson Mandela and portray a man who defied odds, broke down barriers, and championed human rights," British actor Idris Elba said. Brazilian football legend Pele declared Mandela "was a hero to me. He was a friend and a companion in the popular fight and the fight for world peace." 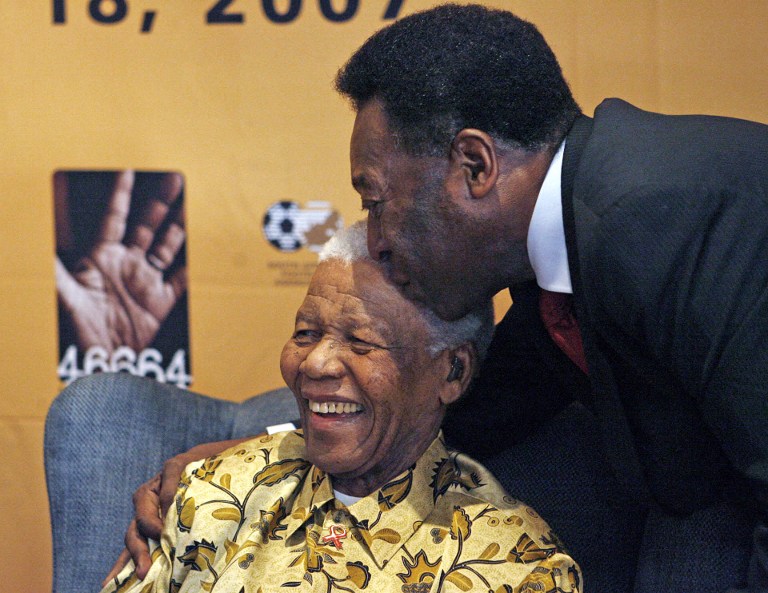 But for all the sentiment around the world, the emotion was strongest in South Africa itself, where the celebration of the life of the nation's greatest leader was tempered by concern to preserve his legacy. "Over the past 24 years Madiba taught us how to come together and to believe in ourselves and each other. He was a unifier from the moment he walked out of prison," said Archbishop Desmond Tutu.

By Dave Clark from AFP