Sat in a tent on the outskirts of Mongolia's capital, Norihil Gendenpil lives on the physical -- and economic -- margins of a booming city filling up with skyscrapers.

The 88-year-old grandmother still worries daily about the rising cost of food for herself and 20 children, grandchildren and other family members.
"Every morning the price goes up," she says, sitting in her yurt, a traditional felt tent used by Mongolian nomads for generations.
"But I don't want to ask anything of my daughters, since they themselves are struggling to make ends meet."
Just a few minutes' drive down a dusty road, glitzy skyscrapers, malls, a five-star golf and ski resort and -- perhaps the greatest luxury in her eyes -- apartment blocks with central heating offer a stark contrast to Gendenpil's way of life.
The nouveau riche in Ulan Bator, home to half of the country's three million people, can now go shopping for Armani outfits, Louis Vuitton bags and Vertu mobile phones encrusted with precious stones. 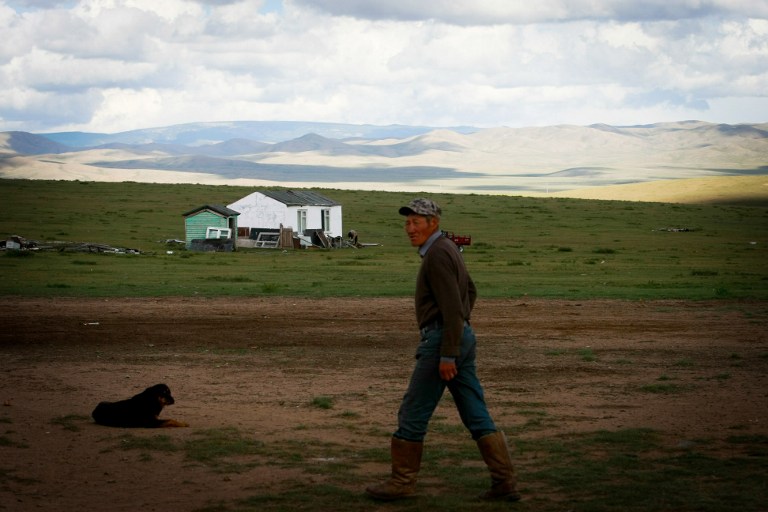 A man walking past a piece of degraded grassland in Altanbulag. ©AFP
Driving Lexus SUVs and Hummers, they clamber over poorly paved roads and idle in chaotic traffic in a city full of dilapidated infrastructure from the era when the country was a satellite of the Soviet Union.
The rapid transformation -- in one of the poorest countries in the world -- has come from the exploitation of vast coal, copper and gold reserves.
Mongolia's economy grew 12.3 percent in 2012 after expanding 17.5 percent the year before.
But rising inequality in the cities along with environmental damage in rural areas have stirred popular discontent.
Mining wealth yet to flow to the fringes
The government of President Tsakhia Elbegdorj, re-elected in July, faces mounting pressure to balance the demands of powerful multinationals and its own people.
It is also dealing with uncertainty prompted by drops in commodity prices and falling demand in the key market of neighbouring China.
Growth has slowed in the first half of the year and foreign investment has plummeted by 43 percent -- prompting parliament to hold special sessions in recent weeks. 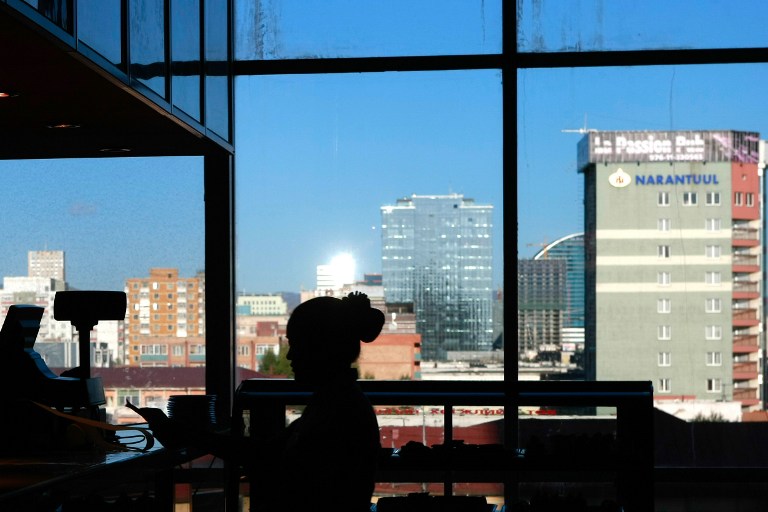 A woman silhouetted as she works at an office building in Ulan Bator. ©AFP
The mining wealth has yet to flow to the fringes, where Gendenpil lives on a monthly pension of 180,000 tugriks ($110, 80 euros).
She relies on government food-stamps -- of $5.90 a month for adults and half that for children -- to buy the Mongolian staples of meat and dairy.
Vegetables can be hard to come by in a country where temperatures drop to minus 40 degrees Celsius (minus 40 Fahrenheit) in winter, while imports from China are expensive.
Some of Gendenpil's younger relatives have already given up on sharing in their country's boom.
Enkhnyamaa Purevsuren, 28, had been earning $310 a month in a leather-goods factory before joining her sister in Malaysia, where she worked as a nanny. 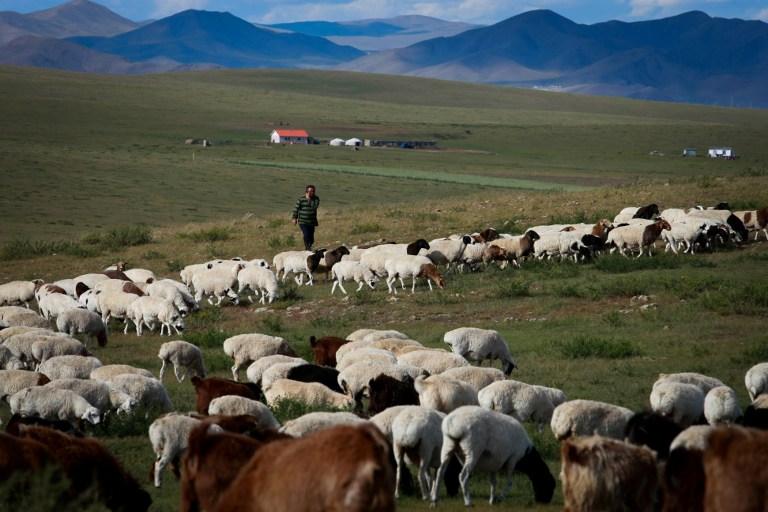 ©AFP
But two years later, at the end of 2012, Gendenpil called her and other family members back to Mongolia, unnerved by rumours involving the Mayan calendar that the world was about to end.
Dutiful relatives returned home, gathering around a shamanistic altar at the back of their yurt to await the apocalypse.
Since then Purevsuren has been hoping to make her way back to Malaysia.
"I haven't managed to save any money," she says.
"I don't have a place to live and salaries are very low."
By Sebastien Blanc from AFP