Parents all over the world often complain about their children's music being garbage. For one group of poor kids in Paraguay, however, who have found international fame by forming an orchestra which uses instruments built from trash, it is quite literally true. The Orchestra of Recycled Instruments of Cateura will mark another notable chapter in their history this week when they will be the opening act for US heavy metal band Metallica on a six-nation South American tour. "It was a surprise for us," said orchestra director Favio Chavez. "We were not expecting that such a famous rock band would show interest in having us as the opening act for their concerts." The orchestra is made up of 40 teenage boys and girls born and raised near Cateura, the main garbage dump serving Paraguay's capital Asuncion. 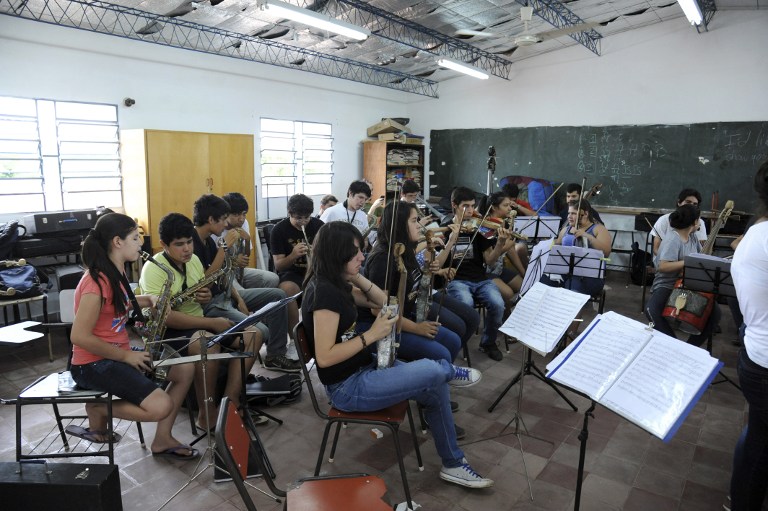 Musicians from a Paraguayan juvenile symphonic orchestra play their instruments made out of recycled trash during a rehearsal in Asuncion. ©AFP

Their violins, flutes, saxophones, and other instruments are assembled from bits and pieces of detritus scavenged from the dump. The Cateura teens perform an array of music, from Mozart, Vivaldi and Beethoven to the Beatles, Frank Sinatra and Edith Piaf. The kids are based in a modest school in a shanty town called "Southern Bath of the Paraguay River," a slum that gets its name from the river's constant flooding. The town has a population of some 25,000, but since it is a squatter settlement and has no official recognition, there is no government investment -- no electricity, no paved roads, no drinking water.

Paraguay is one of the poorest countries in the Western hemisphere. Forty percent of its 6.7 million inhabitants live below the poverty line, and of those half live in extreme poverty, according to government figures. The orchestra was organized in 2006 by Chavez, who came to the area as the garbage dump's environmental technician. His current task is to train the 22 youths chosen to open for Metallica, and prepare the 18 others that will travel either as substitutes or support personnel. He also supervises practice at the site, known as Vy'a Renda -- Paradise, in the native Guarani language -- for 150 other students who endure the stench from the garbage dump to learn how to play on their recycled instruments. It all started when Chavez, who plays the guitar, brought his group from his hometown of Carapegua, located 90 kilometers (55 miles) southeast of Asuncion, to the school for daily meetings with the garbage scavengers. "Many of the children had never seen an instrument or experienced music up close," he said. Since then they built guitars from large cans, and "cellos and saxophones made from the remains of oil cans and used wood," said Thomas Lecourt, a French instrument maker from Strasbourg who has been helping the group for the past two years. 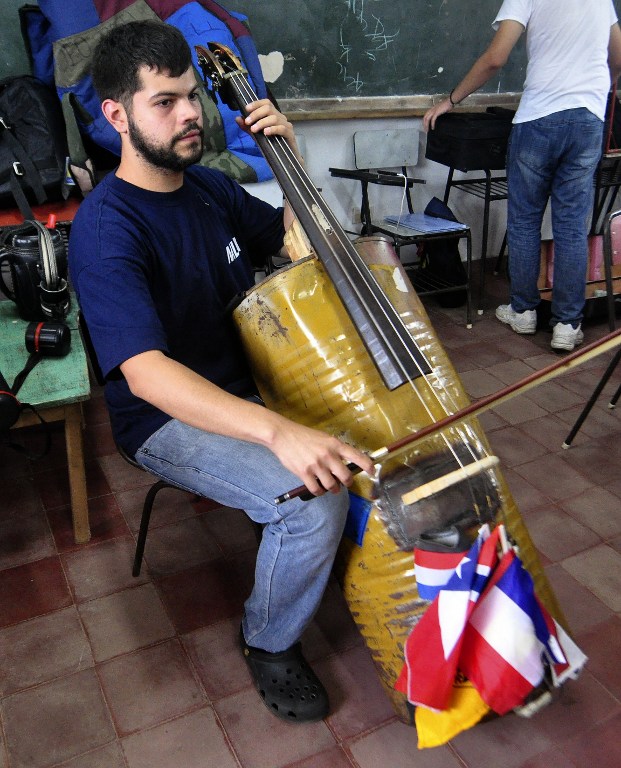 A musician from a Paraguayan juvenile symphonic orchestra shows his cello made out of recycled trash during a rehearsal in Asuncion. ©AFP

"Nobody charges anyone a cent," Lecourt said. Andres Riveros, 17, says that he is enamored with his junkyard saxophone. "This is proof that it is possible to get ahead despite adversities," he said. His instrument is made from a rooftop rain drainage pipe, with keys fashioned from bits cut from cans and local coins.

Tin can violins Ada Rios, 15, is a violin player. The top of her instrument is part of an old paint can, while the body is an aluminum tray once used to bake bread. A fork holds down the chords, and the neck is fashioned from scavenged wooden crate parts. The only thing new are the chords. "My principal motivation is to learn as part of a group," said Rios. "I never thought that we could leave our anonymity behind in this way." Lecourt, 26, is thrilled by his work in the Paraguayan garbage dump. "It gets children and youths away from crime and drugs, and teaches them to believe in themselves," he said. "With dedication and effort opportunities will make themselves available." Chavez says that many people, especially foreigners, have offered to buy the unique instruments. Instead, "we give the instruments away to people who have a lot of meaning to us," he said. 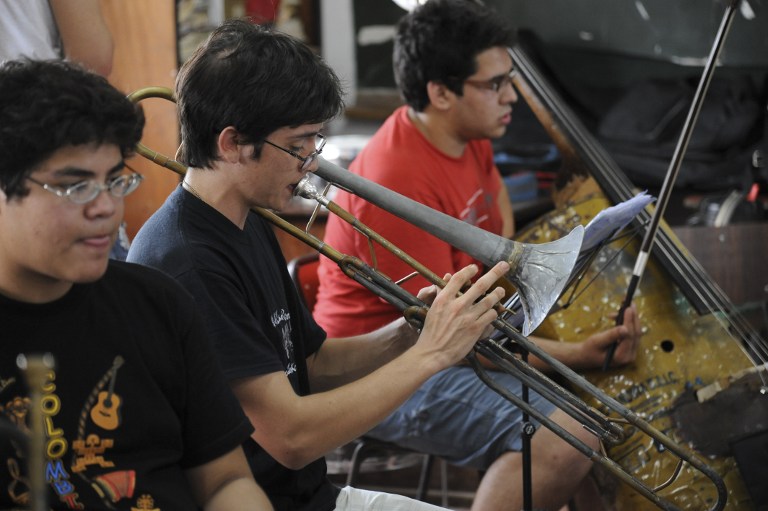 One lucky person was Queen Sofia of Spain. "She has a violin," said Chavez. "Princess Beatrix of Holland has another." One was donated to a museum in Arizona, in the southwestern United States, and another was given to former US president Jimmy Carter. And to famed Cuban singer Silvio Rodriguez "I gave my guitar," he said. How about getting real instruments for the teens? "As long as the kids are poor and live in these conditions, it is impossible to buy them professional instruments that cost more than their homes," he said.

By Hugo Olazar from AFP