"Big Zaw" has known he was different since a teenage growth spurt sent him soaring above his neighbours in a remote Myanmar village.

Now at seven foot eight inches he is believed to be the country's tallest man, and a recent rise to fame means he can finally seek treatment abroad for the health condition behind his towering height.
"My friends call me Big Zaw," said Win Zaw Oo, who at 233cm is significantly taller than the 168cm (five foot six) average Myanmar man.
"I do not fit in an ordinary car. When the doctor brought me here, he had to hire a truck," said the 36-year-old, who was given access to healthcare after a story about him in state media this year sparked a flurry of interest from reporters and medical experts.
He is now set to undergo surgery in Singapore for a pituitary gland tumour -- which causes the body to produce excessive growth hormones -- because the procedure is too advanced to be carried out in Myanmar, where the health system was left chronically under-funded by the former junta. 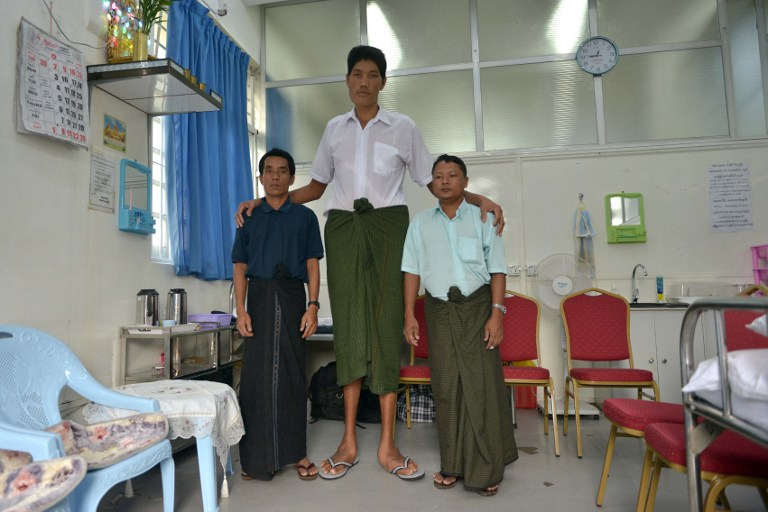 Win Zaw Oo (C) with his cousin at hospital in Yangon. ©AFP
Win Zaw Oo, who left Myanmar on Thursday, said he was anxious about the trip.
"I have only seen a toy plane before, so I feel a bit worried about having to fly. But if it is for my health, I must do it," he told AFP ahead of his departure, adding that he was concerned about the future costs of treatment.
His height brings day-to-day challenges.
Win Zaw Oo has gone barefoot for most of his life in his rural village in Magway region, central Myanmar, where his parents and three sisters scratch a living from growing peanuts and sesame seeds on a couple of acres of land.
While his family was able to make extra-large longyis -- the sarong-like skirt worn by both men and women in Myanmar -- for him, custom-made footwear was far beyond the family's modest means.
His condition also means he tires easily and is unable to hold down regular employment, although he says he can help out in village construction because he does not need a ladder.
Shy but friendly, Win Zaw Oo attracts stares when he travels, but at home people are accustomed to him. 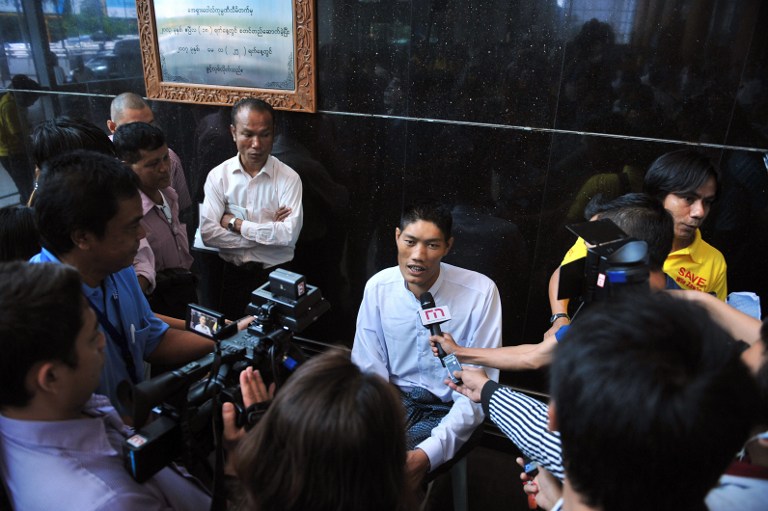 Win Zaw Oo (C) speaks to the media at the international airport in Yangon. ©AFP
"We see him every day in our village... so we do not really think of him as being extraordinarily big," said his cousin Than Htoo.
Myanmar doctors said Win Zaw Oo appeared to have stopped growing, but that his condition carried future health risks.
"He needs to be cured," said Myatthu Mynn, part of the medical team travelling with him to Singapore on a trip funded by private donations from Myanmar and Singapore.
He explained that the procedure -- which usually involves accessing the pituitary gland at the base of the brain through the nose or an incision in the mouth -- is too specialised for Myanmar's hospitals.
Decades of military dictatorship in the Southeast Asian country left the vast majority of citizens without access to even basic healthcare, as the junta state focused on its military spending.
A new quasi-civilian regime took power in 2011, but medical care remains woefully inadequate.
Official figures show the state only allocated around one percent of its expenditure to healthcare in its 2011 to 2012 budget, rising to three percent in 2012 to 2013.
Win Zaw Oo's condition -- acromegaly -- which can lead to gigantism when it develops in puberty, is extremely rare. 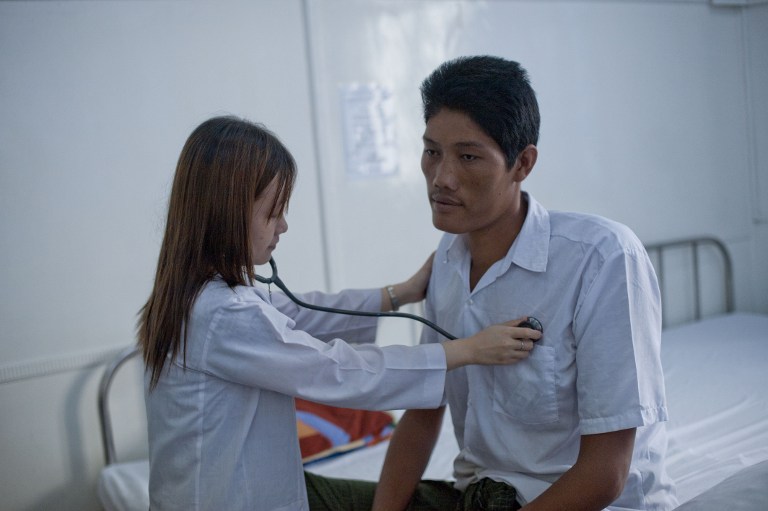 Win Zaw Oo (R) getting a check up at hospital in Yangon. ©AFP
Accurate data for Myanmar is unavailable, but Britain's Pituitary Foundation said only around four to six new cases per million of the population are diagnosed each year.
It said health risks include "diabetes, high blood pressure and heart problems with a reduced life expectancy compared to the normal population".
Doctors said only one other extremely tall person has been recorded in recent memory in Myanmar.
Zee Kwet Sein, who is believed to have died in the 1970s, was left blind by her condition and her exceptional height saw her exhibited at fairs in the country's central region.
Win Zaw Oo's recent fame had led him to consider the possibility of a film career to help support his family, although he would rather start a business with his sisters.
But the condition takes its toll.
"I cannot move quickly like the others do. I feel depressed about that sometimes," he told AFP, adding that he does not expect to have a family of his own but hopes medical care will secure his future.
"After the treatment is finished it will be enough to live my life, even if it does not change my appearance," he said.
by Shwe Yinn Mar Oo  from AFP