Dead locusts are diplayed on a table at a camp

The choppers swoop in, dumping insecticide over a plague-stricken village in Madagascar's stunning central highlands.

"The goal is to break the invasion," explains Tsitohaina Andriamaroahina, head of a UN mission to end a locust plague threatening the crops of 13 million farmers on this island nation.

In their countless billions the insatiable hordes cloud the skies as they spread across two thirds of Madagascar, affecting an area roughly the size of Germany or Japan.

Columns of thick black smoke rise from the rolling grasslands surrounding the village of Amparihibe, 200 kilometres (125 miles) west of the capital Antananarivo, as desperate farmers set fires to disperse the crop-eating swarms. 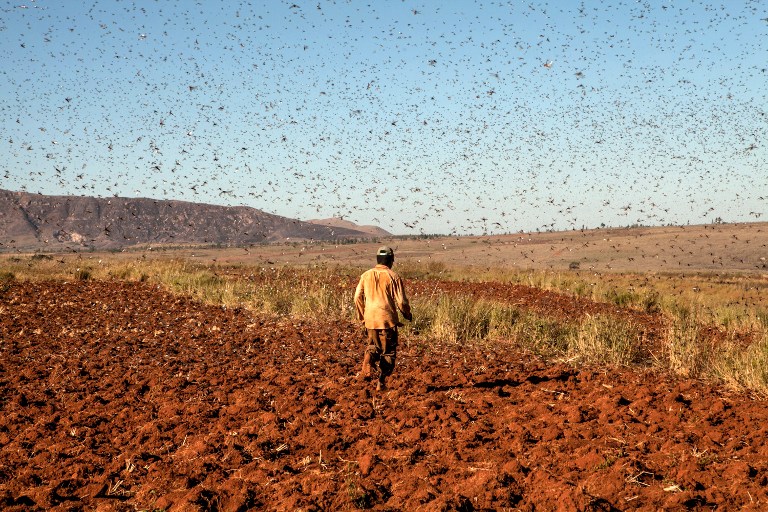 A farmer protects his rice field from locusts by chasing away them with reeds at Amparihibe village. ©AFP

The airborne locust bombers use the tell-tale smoke signals to help them target the insects on daily patrols using three helicopters and an airplane operating from mobile air bases.

"When we fly on a scouting mission, we look at several things: the wind direction, smoke, the position of the sun. All of that shows us where the swarms are," explained Hasibelo Rakotovao, one of the team members.

The 90 people in the joint operation between the UN's Food and Agriculture Organisation and Madagascar's anti-locust agency have already sprayed 500,000 litres (132,000 gallons) of pesticide over one million hectares of land.

Once the insects have been spotted, a technical team arrives before sunrise in a truck carrying pesticide containers which will be attached to the helicopter.

The team moves quickly -- they can only spray at dawn, when the locusts are immobile on the ground, their wings weighed down by the morning dew.

The pesticide only affects insects, according to the mission, neutralising their nervous system.

Villagers then collect the grasshoppers and feed them to their pigs. 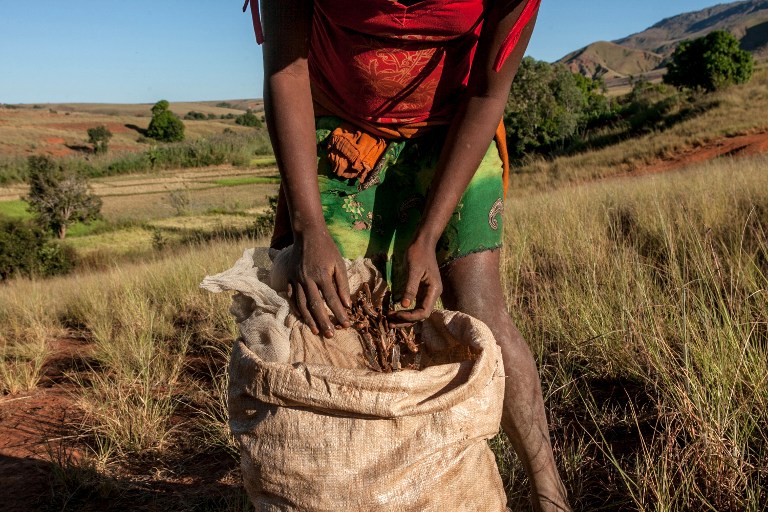 A farmer from Amparihibe village shows a bag full of locust which will be used to feed pigs. ©AFP

"We help one another among neighbours but we aren't enough. We are up to our knees in locusts and can't cope anymore," said Marie Louise Rasoamampionona, a 50-year-old small-scale farmer.

"We have to start bushfires because there's no other way to chase away the locusts."

The swarms have multiplied uncontrollably in recent years because of government inaction during politically turbulent times which saw foreign aid to the country suspended.

The airborne operation under way now is seen as the only solution to the plague, but it is far from over and the FAO still needs $14 million to see the project through over the next two years.

Despite the efforts from the air which have annihilated hundreds of swarms in the past few weeks, local people say they have already been hard hit by rice shortages. 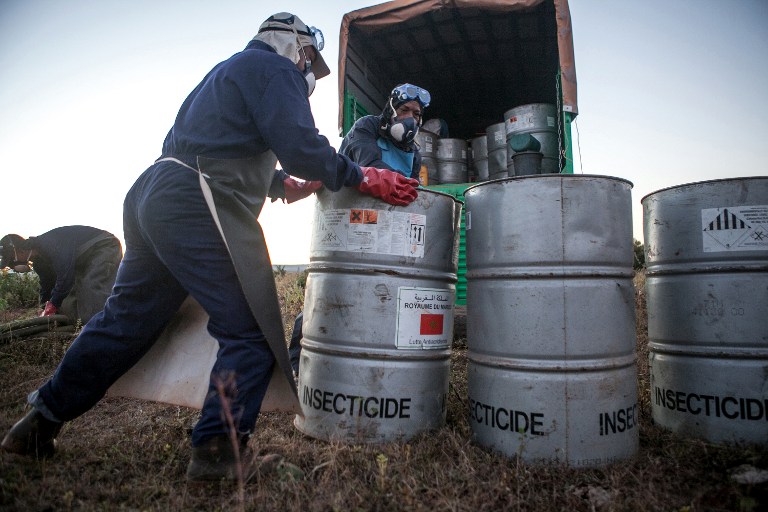 Members of the technical team of the Food and Agriculture Organization of the United Nations (FAO), prepare insecticide for a helicopter equipped for pesticide spreading. ©AFP

"The locusts cause farmers a lot of suffering, because rice is our livelihood," said Ranaivo, a peasant farmer from Amparihibe.

"If it is destroyed, we are lost, what will we eat? If we only eat cassava, it doesn't give us enough energy to work. Rice is essential."

Even if the current plague is brought under control, environmental degradation points to more problems in the future.

Increased deforestation heightens the risk of swarms, meaning that new locust invasions loom on the horizon.

Around 200,000 hectares of forest is chopped out every year, and 90 percent of Madagascar's rainforest has been lost already.

"When people cut down the forests, it creates more grasslands, which attract locusts."

By Gaëlle Borgiaby from AFP