Osamu Tamaki is one of the few rice farmers in Japan who see an Asia-Pacific free trade deal as a window of opportunity rather than the death knell for a highly cosseted industry.

"The TPP (Trans-Pacific Partnership) will give us a great opportunity to go out into the world," said the 32-year-old, who has already exported rice to Taiwan and is now looking to markets in Hong Kong and the United States.

"The TPP may damage domestic farmers, including me," said Tamaki, who harvests rice in Niigata, one of the nation's biggest rice-producing prefectures, north of Tokyo.

But it could also be the much needed cue to reforming a sector that benefits from generous subsidies and jaw-dropping protectionism, he said.

"Our inward-focused farm policies have only led to a decline in competitiveness and accelerated the greying of the industry," he told AFP.

Tamaki is very much in the minority among rice farmers, who have been among the most vocal of opponents to plans announced earlier this month by Prime Minister Yoshihiko Noda to join talks on the Trans-Pacific Partnership.

Most farmers fear that a free trade pact will be bad news for them. And buffered from global trade by a nearly 800 percent tariff on imported rice, it is not difficult to see why.

"I understand globalisation is something we must face, but I'm not confident," said Koichi Daikoku, a 62-year-old rice grower in Akita, northern Japan.

"I can't tell my son to take over my rice fields as I don't see the future of farming," Daikoku said. "I can't help but think that in the future I will have to give up the fields I have inherited from my ancestors."

For the Japanese, rice -- eaten three times a day in many homes -- is a grain that has a special place in the national heart. In earlier times it was used as a currency, and it is still offered in tribute on religious occasions.

Domestically produced rice is held to be far superior to foreign-grown grain. A poll this month by the Yomiuri Shimbun showed 89 percent of respondents claimed they would continue to buy Japanese rice, even if vastly cheaper imports were available.

Noda risked splitting his sometimes fractious party and incurring the wrath of the powerful farming lobby when he said Japan would dip its toe in the talks to forge the TPP.

Australia, Brunei, Chile, Malaysia, New Zealand, Peru, Singapore, the United States and Vietnam are already signed up to take part in negotiations towards the deal.

Noda's announcement electrified this month's Asia-Pacific Economic Cooperation (APEC) gathering in Hawaii and prompted Canada, Mexico and latterly Taiwan to express an interest in what could become the biggest free trade zone in the world, accounting for 40 percent of global economic output.

The pact is a key plank of Washington's bid to engage with the fast-growing Asia-Pacific region, and the participation of Japan, the world's third largest economy, is seen as vital to give it credibility.

Japan's exporters -- struggling under the weight of a stubbornly strong yen -- are eager for Tokyo to sign up, hoping greater access to foreign markets will help make up for the shrinking and greying population at home. 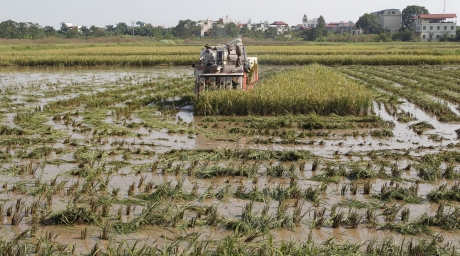 A man operates a rice harvester on a paddy rice field. ©Reuters

But farmers remain convinced a sudden influx of cheap food could destroy their sector.

They point to problems they are already suffering in the wake of the Fukushima nuclear disaster. The March earthquake and tsunami knocked out cooling systems, sending reactors into meltdown and releasing radiation.

"The TPP (issue) has come when more and more farmers are giving up their fields in Fukushima because of the nuclear accident," said a 57-year-old rice grower in Nihonmatsu, central Fukushima. "We are facing dual hardship."

Calls for agricultural reforms are nothing new, with Japan's high-speed economic growth in the post-war era standing in direct opposition to its farm industry.

The number of farmers in Japan declined by more than 30 percent over the past decade to 2.6 million, according to the farm ministry. 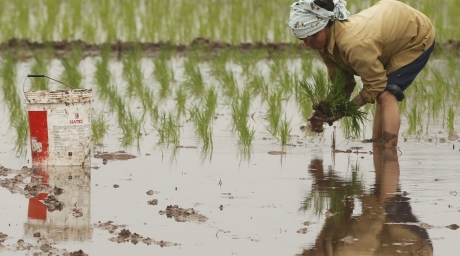 A farmer plants rice on a paddy field. ©Reuters

Half of those farmers are aged over 65, while more than 70 percent have second jobs, partially due to a rice acreage reduction policy aimed at sustaining falling rice prices, which resulted in a growing number of abandoned rice fields.

Slowing consumption of rice is also a challenge, with many young Japanese adopting Western-style diets of bread and pasta.

While farmers are undoubtedly suffering, they still have powerful friends in powerful places.

Farmers have also formed lobbying groups to provide financial support for pro-farming lawmakers, and were key to sustaining the more than half-century of almost unbroken rule by the conservative Liberal Democratic Party.

If, as foreign politicians are demanding, rice is included in the free trade agreement, the enormous tariffs these farmer-friendly politicians put in place would have to go.

"If the TPP is introduced, Japanese rice would be defeated by foreign rice. There is no doubt about it," said Takashi Ogino, an analyst at Fukoku Mutual Life Insurance in Tokyo. 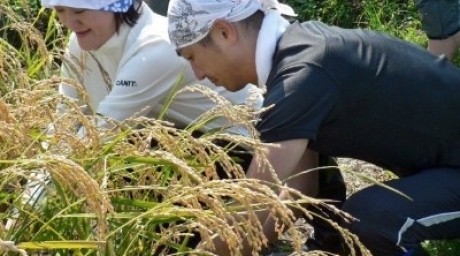 Noda has tried his best thus far to fudge the issue and please everyone.

"I don't think we have to take part in negotiations that will cause damage to our national interest," he told parliament.

But Hideki Shimazaki, CEO of Top River, a firm that helps young farmers who want to establish large-scale operations, says there is no way to keep everybody happy.

"Conventional ideas of treating everybody equally do not work. We should lose the battle to win the war," he said.