Mieko Kitai takes a huge gulp of air as she surfaces from the clear, blue waters of Japan's Pacific coast with a large abalone in her hand.

Now in her 70s, the dive -- with nothing more than a mask -- does not get any easier and the pickings get slimmer with every passing year.

But she and her fellow divers or "ama" -- which roughly translates to "sea woman" -- reap the fruits of the sea in a way that has been practised in parts of Japan for thousands of years.

"Finally, I got one," she says as she climbs aboard the boat and pulls the mask off her weather-beaten face.

Kitai is one of a dozen free divers who gathered on a recent sunny day in Shima, Mie prefecture, in western Japan.

They chatter loudly from excitement and necessity -- some have suffered hearing loss because of the high pressures experienced at depth -- as they rub their masks with a kind of slimy algae to prevent fogging. 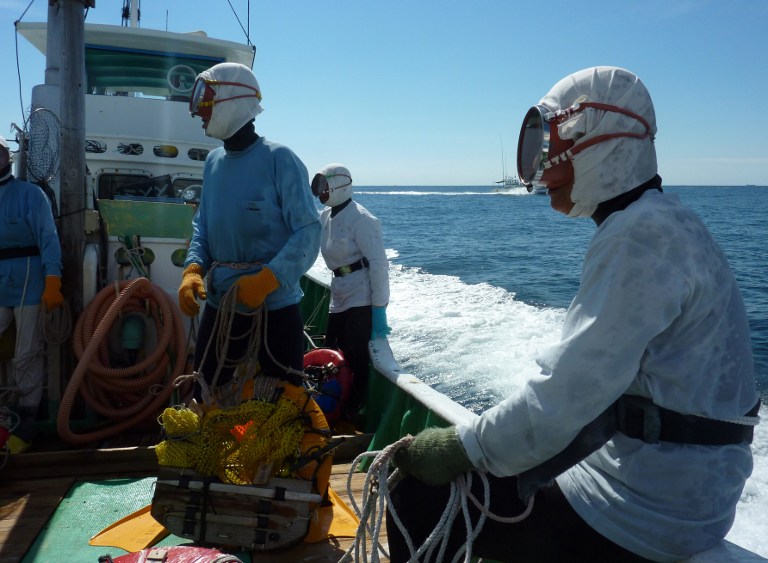 Female skin-divers, called "ama" in Japan, prepare to dive into the sea. ©AFP

Some join hands and utter a Shinto prayer for those they have lost, including an 80-year-old who died last year on a dive. "Her heart gave out," said one of them.

Each has a weight belt around their waist to give them a little help when they jump overboard into water up to 20 metres deep. Some are gone as long as a minute before they surface again with a shellfish or an urchin.

"Today, the fishing was better than I thought it would be," said Kitai as she dropped an octopus and several turban shells, a prized shellfish delicacy, into her catch net.

"In the past you could get as many as 40 abalone in a day, but now getting four counts as a good day," said fellow free diver Sumiko Nakagawa, her face lined by her years in the salty water under the beating sun.

Pollution and overfishing have taken their toll on abalone, the main source of income for these women, with the creature's population dropping by 90 percent in the last 40 years in Japan. 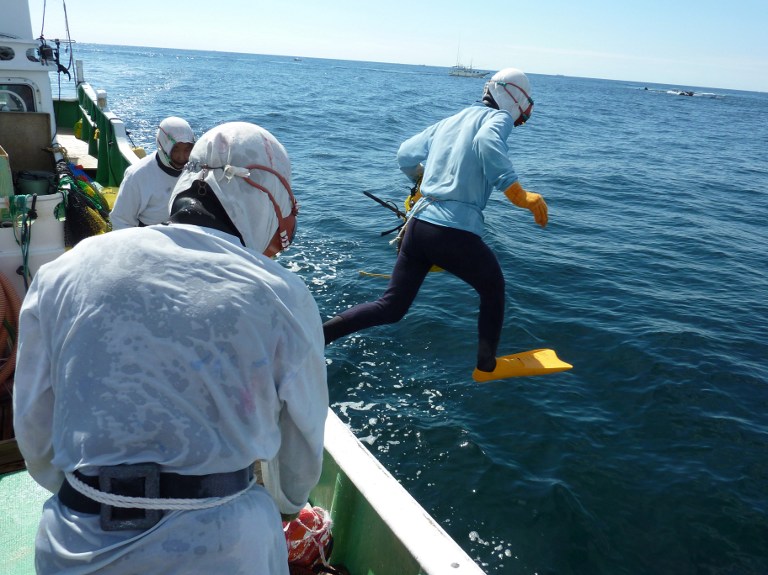 A female skin-diver, called "ama" in Japan, dives into the sea. ©AFP

In 2011 local authorities released young abalone into the ocean in a bid to prop up their numbers. They also ban the use of scuba tanks and limit catch to specimens over 10 centimetres (4 inches) long -- a size they usually reach around the age of 10.

This kind of fishing was once the sole preserve of women, who were commonly believed to be better at coping with the sometimes-cold water because of a thicker layer of fat under their skin.

It was also traditionally done topless, although their most famous cinematic outing -- in James Bond's 1967 effort "You Only Live Twice" -- saw sultry actresses cover their modesty with skimpy bikini tops as they cavorted with Sean Connery.

The advent of wetsuits opened the profession to men, says professor Yoshitaka Ishihara, director of the Toba Sea-Folk Museum.

"Now there are almost as many men as women," said Ishihara, whose museum houses skin-diving artefacts dating back 10,000 years.

The scant rewards and the high risks have discouraged many young people from taking up the profession, and many fear the tradition could die out when those in their 60s, 70s and 80s pass away. 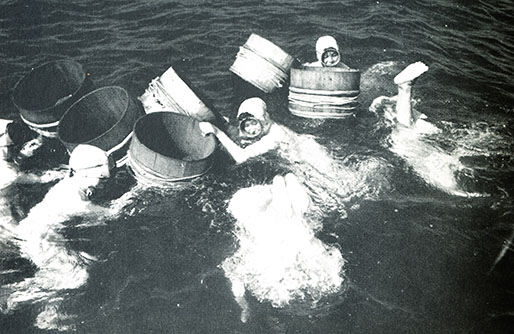 Younger divers who take up the profession find it is not easy.

"Initially I made virtually nothing," said Satomi Yamamoto, 37, as she grilled sea urchins on the harbour in Shima. "But I got better and four years later, I was earning about 100,000 yen a month."

Yamamoto is one of a handful of women of her generation to have embraced a way of life they were not born into.

"I was raised in Osaka and I had always lived in a big city, but I am much happier since coming here seven years ago to join my husband," she said.

Yoshitaka Ishihara says as Japan mechanised its fishing and farming, the way of the ama changed a little to keep up.

"Until 1970, girls started fishing when they were about 16 or 17 and learned from just watching their mother," he said.

"Now recruits have to undergo a tough initiation and for the first four years have to work with an experienced diver."

But despite the shrinking number of creatures in the sea, there is a real camaraderie among the ama of Shiba.

"We never compete for fish," said the now-retired 83-year-old Yuriko Matsui. "If we did, all the shells would have disappeared by now."

By Antoine Bouthier from AFP