Iraq wants to put the legacy of murderous dictator Saddam Hussein behind it, but faces a huge need for specialists to excavate mass graves thought to contain at least half a million unidentified victims. The stakes are high for Iraq, a country seeking reconciliation with itself, where countless families lost all trace of their relatives during the dictator's 1979-2003 rule or the terrible internecine violence in the years after his overthrow. Families have not been able to come to terms with the loss, as they have never found the bodies of their loved ones or learned the circumstances of their deaths. But the process of excavating the mass graves and identifying the victims, which could take decades because of its scope and difficult terrain that includes landmines and unexploded ordinance, requires a highly skilled workforce that does not exist in Iraq. The International Commission on Missing Persons (ICMP), created on the initiative of former US president Bill Clinton and financed by Western states, has since 2008 held courses for employees of the Forensic Institute and the ministry of human rights aimed at addressing the shortfall. 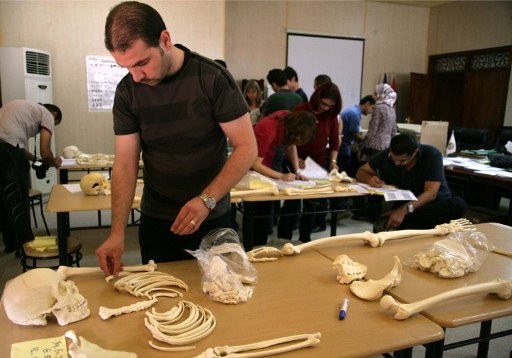 Iraqi forensic students learn their skills in a lab as other train at a mass grave (unseen) in Iraqi northern city of Arbil. ©AFP

-- Plastic skeletons -- The courses, offered in Arbil, the capital of the autonomous Kurdistan region in north Iraq, include plastic skeletons buried in the garden of the hospital where they are held. "We try to make the scenario as realistic as possible," said James Fenn, the coordinator of the programme, pointing to 20 participants who were carefully digging in the soil. Gradually, the outlines of a dozen "bodies" emerge, some with their hands and feet bound, or showing signs of trauma. The team makes a thorough record of the "grave", making drawings on graph paper and lists of bones and evidence discovered. The approach is very scientific and rigorous. "We have learned to use a trowel and to dig without using machines like bulldozers, as they cause damage and may erase lots of evidence," said Salah Hussein, one of the trainees. One of his colleagues, Thamer Hassan, has a brother who has been missing since 1987. "Maybe he is in one of the graves," Hassan said, adding that despite this, his motivation was his "duty" as an employee of the ministry of human rights. Once they have been exhumed, the bones are given to another team from the Forensic Institute in Baghdad, who are charged with examining them. The trainees examine the bones on a table, trying to determine how many people they might have belonged to, their age and their sex -- and listing the details with care. "It's important for the families," said Dr Dunia Abboud, a 26-year-old dentist. "A lot of families lost a member and don't know what happened to them." 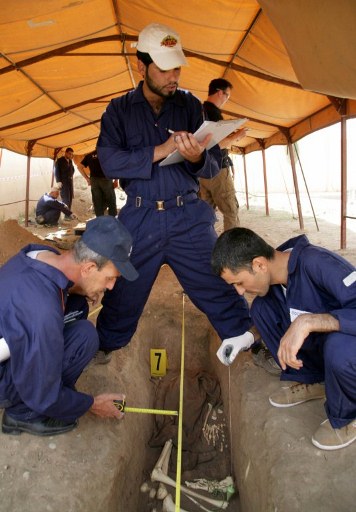 "We try to help them," Abboud said. "This helps to do justice." -- At least 270 mass graves -- Some 170 people have been trained since 2008, but the need is huge, said Johnathan McCaskill, the head of Iraq programmes for ICMP. The Iraqi government is working under the assumption that there are 500,000 missing people, but some estimates put the number of missing from repression under Saddam's rule, especially against the Kurds and Shiites in the 1980s and 1990s, at more than one million. "The information we started up with was that there are at least 270 different mass graves in the country," McCaskill said. 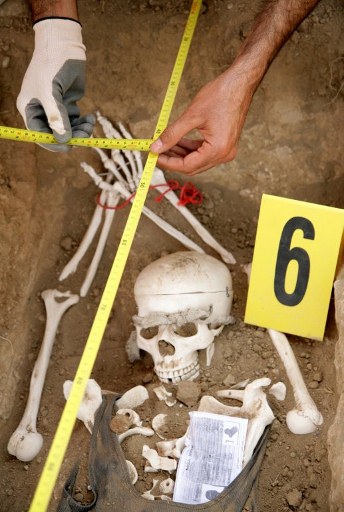 Most of Iraq's mass graves date from the time of Saddam's rule, he said, but it is possible that there are some from the bloody sectarian fighting that came in the years after his overthrow, in which tens of thousands of people were killed. McCaskill said that after Saddam's fall in 2003, some people began to dig on their own, looking for relatives, though this has since been prohibited by law. The ICMP is also working with the Iraqi government on a DNA identification programme with much more reliable technology. But it is complex and expensive. Samples are currently analysed at the ICMP headquarters in Sarajevo. Meanwhile, the training will continue for at least two years. But is a course enough to prepare someone for something so disturbing? Thamer Hassan thinks so, saying: "I am ready to work in real graves."

by Amelie Herenstein from AFP