On a leaf-covered dirt path overlooking lush paddy fields in western Indonesia, the world's rarest rhino had left a trail of hoofprints in the soft mud and bite marks on foliage. For people seeking a glimpse of the Javan rhino -- revered in local folklore as Abah Gede, or the Great Father -- such small signs are likely to be the closest they get. There are thought to be only around 50 of the animals left in existence, all living in the wild in Ujung Kulon National Park, an area of stunning natural beauty on the western tip of Indonesia's main island of Java. 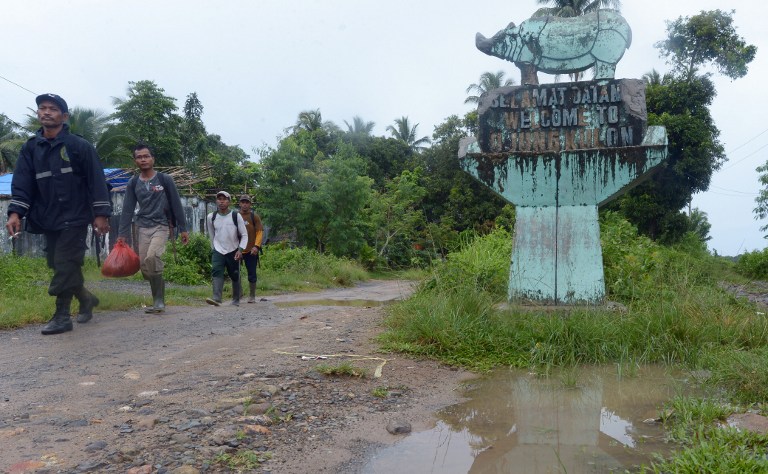 But now conservationists are hoping that the country's first ever Javan rhino sanctuary, which will open in the park in the coming months, can pull the animal back from the brink of extinction. The shy creature, whose folds of loose skin give it the appearance of wearing armour plating, once numbered in the thousands and roamed across Southeast Asia. But, like other rhino species across the world, poaching and human encroachment on its habitat has led to a dramatic population decline, with the International Union for Conservation of Nature (IUCN) saying the animal is "making its last stand". The new sanctuary will encompass 5,100 hectares (12,600 acres) of lush rainforest, freshwater streams and mudholes in the park, which is a UNESCO World Heritage site. It is not due to open until March but park officials say that from hoofprints and bite marks, they believe nine rhinos have already wandered into new areas set aside for them. "It means our scheme to turn this sanctuary into a comfortable home for them is working," the park's habitat manager Rusdianto, who like many Indonesians goes by one name, told AFP. The rhinos were already living mainly in one corner of the park. But the new sanctuary has expanded the area suitable for them and relocated farmers who were living there to reduce the chances of animal-human conflict. An electric fence is also being constructed -- the final piece of work that needs to be completed -- to mark the boundary and prevent the rhinos from straying out of the sanctuary and humans from coming in. 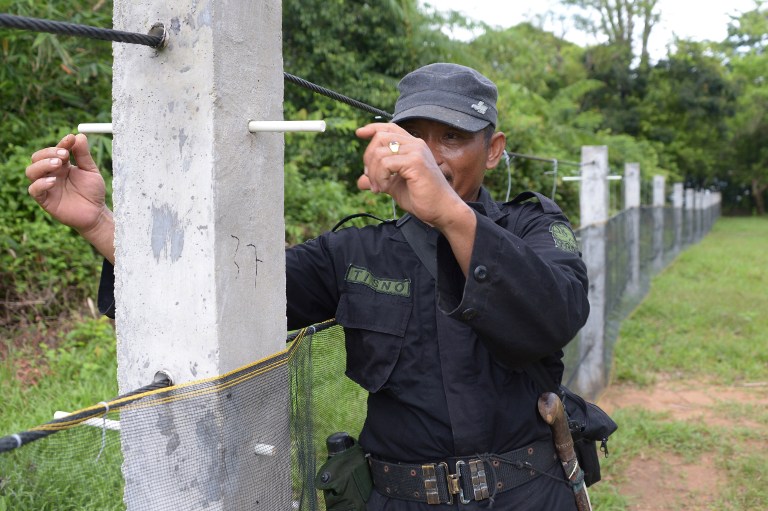 A member of the JRSCA (Javan Rhino Study and Conservation Area) showing how electical fencing will be put up to protect rhinos and other animals walking out from the forest at the Ujung Kulon National Park in Indonesia's Banten province. ©AFP

Park officials, who are government employees, have also been planting suitable food for the rhinos. During a recent visit by AFP, workers were seen clearing palm trees from the area and replacing them with shrubs and small trees. "We hope this sanctuary will hasten breeding and lead to more births of this treasured rare animal," park chief Moh Haryono told AFP. "In a more enclosed space, the male and female rhino will have more opportunities to frolic and mate freely." Rhinos around the world are under threat Yet setting up the sanctuary, which is government-run but fully funded by US-based charity the International Rhino Foundation, has been no easy task. It was originally due to open in 2011 but was held up due to red tape, a common problem in the sprawling Indonesian archipelago, which has a huge and often inefficient bureaucracy. Work also stalled for a year due to protests from residents demanding compensation for farmland they had to give up, as well as from local animal activists who felt the use of heavy machinery to build the fence threatened the environment. However all obstacles now seem to have been overcome and, barring any last-minute hold-ups, the sanctuary should officially open soon. Nevertheless it is just a small step in an uphill battle to save the Javan rhino. Officials in Ujung Kulon believe there were 51 of the rhinos in 2012, including eight calves, basing their estimate on images captured by hidden cameras. They hope the true figure may be in the 70s and will have a new estimate once data for 2013 has been collated. 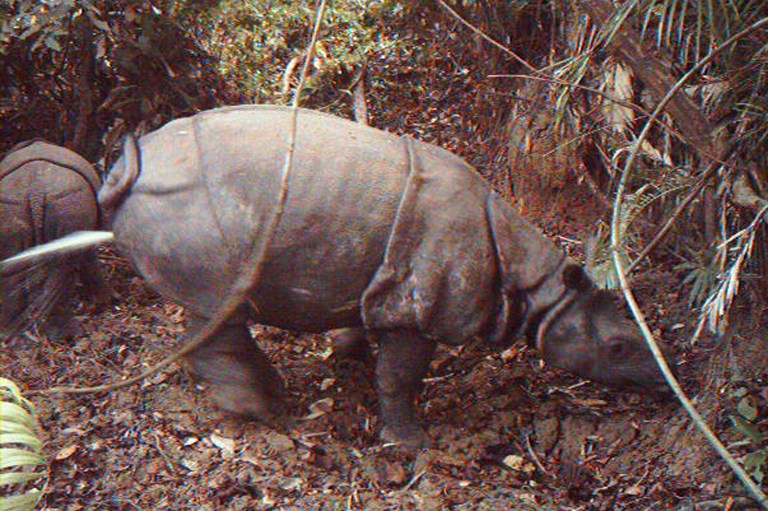 The case of the Javan rhinoceros highlights the plight of rhinos across the world, with other species also deemed to be under threat and some subspecies already believed to have died out. Poaching in particular represents a severe threat, with rhino horns used in traditional Asian medicine fetching ever higher prices on the black market despite a lack of scientific evidence showing horn has any medicinal value. In Indonesia, fewer than 100 of the critically endangered Sumatran rhinos remain; in 2011 the IUCN declared a rhino subspecies in western Africa extinct; and the group has said the Central African northern white rhino is "possibly extinct". Asia has stepped up efforts to save the region's dwindling rhino populations, with representatives from several countries in October attending a conference on the issue on the western Indonesian island of Sumatra. Countries represented, including Indonesia, Nepal and India, pledged to take steps to grow their rhino populations by three percent annually. For the Javan rhino, its population already decimated, the threat is no longer poaching but food scarcity, illness and the risk of natural disasters in an archipelago where earthquakes and landslides are common, according to WWF Indonesia. Despite the myriad threats, wildlife officials are hopeful the new sanctuary is a step in the right direction. They have also been heartened by strong support from the local community. Any effort to save the Great Father is applauded in an area where centuries-old beliefs persist and intertwine with the vast majority's Muslim faith. "We must do all we can to prevent the Javan rhino from becoming extinct," Suhaya, a 67-year-old farmer who goes by one name, told AFP. "Locals here believe that Abah Gede must not vanish from the face of the Earth, or disaster will befall us." By Arlina Arshad from AFP