India camel breeders count losses at one of world's largest fairs
As dusk falls on the desert town of Pushkar in northern India, turbaned herdsmen huddle around fires and lament the downfall of one of the world's largest livestock fairs. Like many traders, Jojawa trekked hundreds of kilometres to reach the decades-old cattle and camel fair, a journey that took him seven days from his village in the desert state of Rajasthan. But the way things are going, he expects to go home with his pockets half-empty and some of the 25 camels that he hoped to sell still in tow. "This year there are fewer buyers and fewer camels," says Jojawa who has been coming to the annual fair for 35 years. "If it goes on like this, in another 4 to 5 years, I'll be finished," adds Jojawa who uses one name. 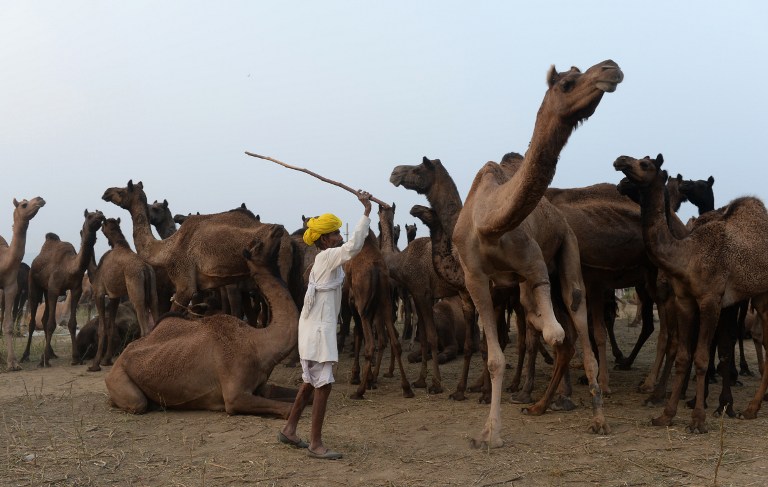 An Indian camel herder attempts to control livestock at the camel fair grounds in Pushkar. ©AFP
Official figures for the five-day fair, which finishes this week and has long been a major tourist attraction, show the number of camels on sale has fallen to 4,739, a sharp drop from the 8,000 recorded in 2011, and a fraction of those from previous decades. "I see more cameras than camels these days," says Ilse Koehler-Rollefson, a German academic turned activist with the non-profit organisation Lokhit Pashu Palak Sansthan (LPPS), which works to support Rajasthan's traditional Raika pastoralists. She says the Pushkar fair is the only time of year when camel breeders earn a cash income. Camels are normally sold for around 15,000 rupees, or $230 each and used on farms or as transport. But as sales decline, breeding is becoming a less viable way to earn a living, and as a result she sees the traditional values that underpin the market "rapidly disintegrating". Among the region's most prominent camel herders, the Raika believe the Hindu god Lord Shiva handed them the responsibility to rear camels. The semi-nomadic herdsmen consider their relationship with the animals as sacred and they are unique among camel herders worldwide for not slaughtering the camels they rear. But all that is changing. "In the past 10 to 15 years, this taboo against the slaughter of camels has totally disintegrated and now we're at a stage here where in Pushkar most of the camels are actually sold for meat," Koehler-Rollefson says. Traditionally it was also taboo to sell female camels, considered the life-blood of a herd, but these days even they are sold for slaughter, she says. "It's a sell-out. Once the females are gone that's pretty much the end, you're out of the business, you're not going to be back next year," she adds. 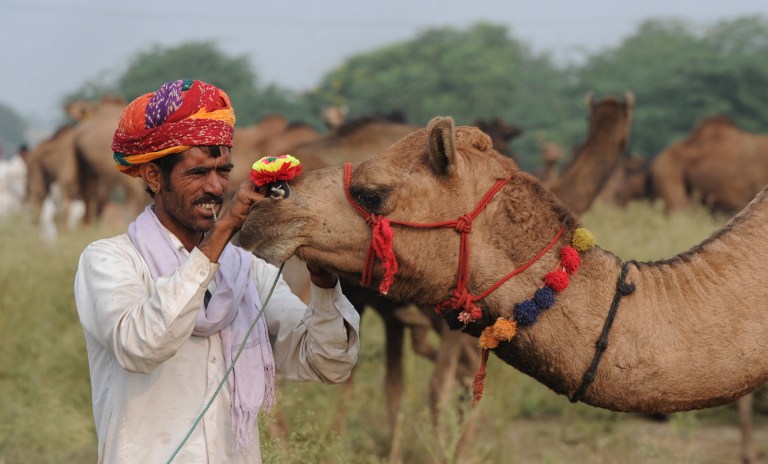 An Indian camel owner decorates his camel in the early morning at the camel fair grounds in Pushkar. ©AFP
Camel population plummets As modernisation has swept across India, thanks to an economic boom, the country's camel population has plummeted by 50 percent over the last three decades. In 1982, there were more than one million camels nationwide, but numbers dropped to just over 500,000 by 2007, according to the most recent survey by the ministry of agriculture. Of these, more than 80 percent live in Rajasthan, where camels have traditionally been used as work animals on farms or as transport for carrying freight. But as vehicles and agricultural machinery become ever more accessible and affordable, sons from breeding families see no value in camels. Like tens of thousands of other young Indians, many are seeking a more lucrative income away from the land in India's sprawling cities. The herders who are left are mostly from the older generation, men like Jojawa for whom life has changed little and is only becoming harder. Most complain about the reduction in grazing areas for feeding their stock as development encroaches on common land and national parks and forests become out of bounds. Breeding becomes riskier as a poorer diet makes camels more susceptible to illness and miscarriages are more likely, says Koehler-Rollefson. A government-backed programme in the city of Bikaner in northern Rajasthan is trying to create more resilient animals through enhanced nutrition and cross-breeding. But herdsmen like Nimaram say that programme is only benefiting herders in the large, arid region of the Thar desert, and has had no impact on his community further south. "Our children want to continue rearing camels, but only if it is profitable," says Nimaram, who also only uses one name. 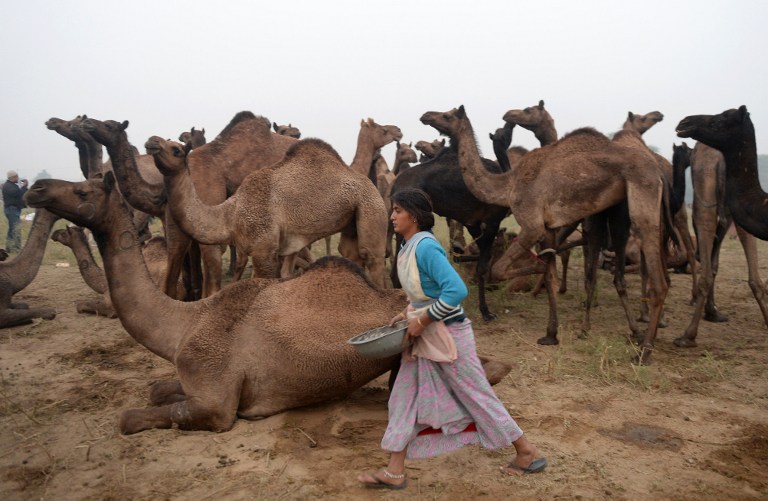 An Indian woman carries a bowl while picking up camel dung before sunrise at the camel fair grounds in Pushkar. ©AFP

He wants the government to offer loans to help them invest in camel milk dairies, an industry that has already taken off in the Middle East.

The Food and Agriculture Organization estimates the global market for camel milk is worth $10 billion, but India's share is currently just 0.1 percent. Camel milk is a rich source of insulin and is touted as a dietary treatment for diabetes, a potentially huge market in India which has the highest number of diabetics in the world. But the country's small-scale camel milk producers lack the infrastructure to transport refrigerated milk and make it a viable business. Nimaram spends 10 months of the year out grazing with his animals and he hopes that in the future his children can work alongside camels too. But he knows the prospects for that aren't very promising. When he was a child his family owned 500 camels, now they are down to just 50. His biggest fear is that one day there will be so few camels left in Rajasthan that his grandchildren "will only get to see them in pictures or in books." By Charlotte Turner from AFP