On a mountain of trash, a man takes a quick break in a sliver of shade before resuming his sorting work in Latin America's largest garbage dump hugging Rio's famed Guanabara Bay. But soon, he'll have to look for a new job. Ahead of the Rio+20 United Nations sustainable development summit next month, which will draw tens of thousands of people into the city, authorities are shutting down the 36-year-old landfill known as Gramacho. Built on a swamp, it swallows up 70 percent of the garbage produced by this huge metropolis of 11.8 million people. But the ground is unstable and shakes under the weight of the trucks that rumble through. The dump's pending demise, repeatedly postponed and now slated for June 1, has left thousands of trash pickers -- called "catadores" -- wondering what will become of them. 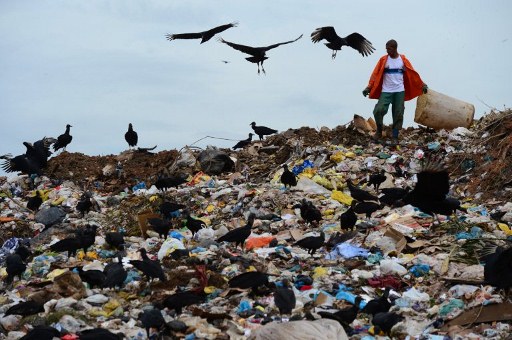 Trash at the Jardim Gramacho landfill, the biggest in South America. ©AFP

"The closure of the dump will have a very big impact on us since for many this was the only source of income," 32-year-old Ana Carla Nistaldo, who has spent half of her life in the nearby town of Gramacho, home to 20,000 people, told AFP. "What will happen to the families?" "Catadores" run a myriad of risks to sift through refuse and separate out recyclable materials -- plastics, cans, paper or soda bottles -- and sell them either to middlemen or directly to one of 42 local recycling centers. They can make up to $45 a day in a country where the minimum monthly wage is $306. City officials say the trash-picking business has brought in a total of nearly $12 million since the dump was opened in 1976. "It is better to be a 'catador' in a dump than to be a thief to earn a living," said 57-year-old Giova Correia dos Santos. "I earn clean and honest money." Authorities had initially tried and failed to shut down Gramacho in 2004, when it was taking in some 8,000 tons of trash a day, after a series of leaks. -- 'My dreams are over' -- But when word spread that the dump was finally being closed next month, some 2,000 "catadores" banded together in protest to demand compensation. As a result, the city rewarded 1,600 of them with a $7,500 payoff. 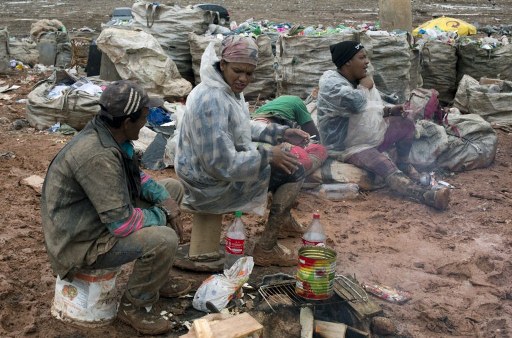 A group of 'catadores' (scavengers) take a break at the Jardim Gramacho landfill. ©AFP

"To get $7,500 is nothing for those who have worked here all their lives," said Nistaldo, whose home boasts two television sets, a microwave and a DVD player. "I raised my children with money from the garbage and they had everything they needed, she added. Others are also at a loss on how to survive going forward. "My dreams are over," echoed 34-year-old Valeria da Silva. "I have nothing left." As of June, trash from Gramacho will now be transferred to another, privately-owned dump.

Another firm will handle methane gas from Gramacho, which over a 15-year period will earn some $232 million in carbon credits, according to city officials. 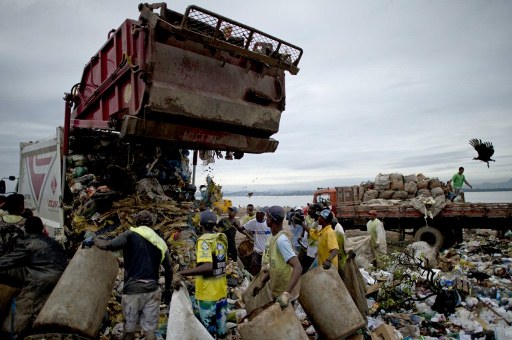 A group of 'catadores' (scavengers) dig through trash at the Jardim Gramacho landfill. ©AFP

Carbon credits -- one credit being equivalent to one metric ton of carbon dioxide -- is awarded to organizations or countries which have cut their greenhouse gas emissions below their set quota. These credits can then be used and traded on an international market. Known as Rio+20, the June 20-22 UN summit is the fourth major meeting on sustainable development since 1972 and is expected to draw 115 world leaders and 50,000 participants. Topics to be discussed include food security, water access, energy and biodiversity.

by Maira Renou from AFP