For the past 60 years, Chui Hoi has risen in the early hours of the morning to prepare bite-size steamed morsels for his small but popular dim sum restaurant in Hong Kong.

"Sun Hing" opens its doors at 3:00 am, seven days a week, with a loyal clientele from students to the elderly filling the 60-seat restaurant in the western district of Kennedy Town.

At 85 years old, Chui is committed to handmaking his dim sum -- parcels of meat, seafood and sweet fillings served in stacks of bamboo baskets -- saying that freshness is key to their success. 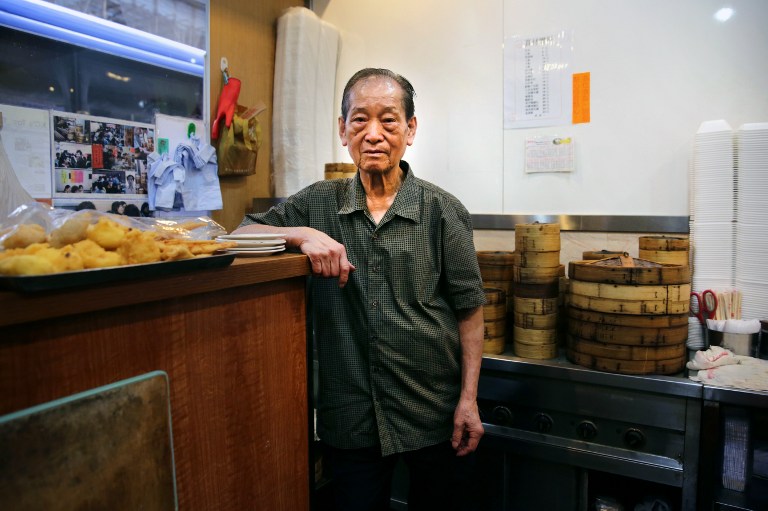 Owner Choi Hoi standing at the front counter of Sun Hing dim sum restaurant in the Kennedy Town district of Hong Kong. With much of the city's famous "dim sum" snacks now factory-made, a core of dedicated chefs are determined to prevent the handmade tradition from dying out. ©AFP/Isaac Lawrence

But many in the industry fear the traditional art of making dim sum is dying as restaurants choose factory-made versions to save money and meet demand.

"Fresh handmade foods are beautiful after they are steamed, but many are made in factories now," says Chui.

Younger chefs are less interested in the hard graft it takes to prepare dim sum, he adds -- it is usually eaten in the morning, so cooks must get up in the night to prepare.

"Young people think being in this industry means no freedom because you have to get up early and the hours are long," he said.

At Maxim's Palace in the harbourfront City Hall building -- a favourite with locals and tourists -- chandeliers sparkle over dim sum diners in the buzzing banqueting hall.

But, like Chui, Maxim's supervising chef Tang Leung-hung says there is a dearth of young talent to produce its handmade fare.

"The problem with the industry is the manpower. Young people are not willing to join us," he told AFP.

"Many of them have turned to hotels' western restaurants and sushi restaurants for jobs instead of Chinese ones," says Tang, with younger people seeing them as more fashionable and with better hours.

Dim sum -- which means "touching the heart" -- is a Cantonese-style cuisine from southern China, often served with pots of tea.

Once mainly part of a leisurely weekend ritual which could take hours, many dim sum joints in Hong Kong now have a quickfire approach, including take-away kiosks inside subway stations.

With demand growing and rental costs high, mass-produced buns and dumplings imported from mainland China are a way to up the volume and cut costs.

But there are those who are actively seeking to prevent a culinary art from dying out.

"We need to attract youngsters to join this trade. Craftsmanship is what is needed," says Frankie Tang, executive chef of the Peninsula's Spring Moon Restaurant and organiser of the contest. 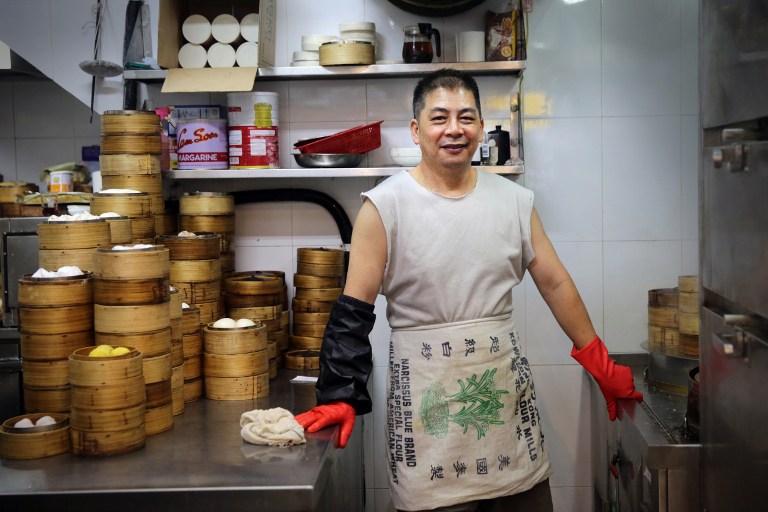 A cook standing in the kitchen of the Sun Hing restaurant in the Kennedy Town district of Hong Kong.  ©AFP/Isaac Lawrence

"We should make people not forget (how to make) dim sum. We should continue to develop this tradition," said Wu, who won HK$25,000 (US$3,200) cash and a one-year apprenticeship at the hotel.

There is also hope among the city's food experts, who say dim sum's enduring popularity at home and increasing appeal abroad will inspire young chefs.

"Yum cha" -- Cantonese for "drink tea" -- is the name for the meal during which dim sum are eaten, washed down by hot tea.

Koo adds that it is important to preserve the handmade tradition as it is a key facet of Cantonese culture.

"I have confidence that there will be new blood as the market is there," he said.

Back at "Sun Hing", the elder Chui's 48-year-old son Chui Kwok-hing is following in his father's footsteps.

"I come in at 1:30 am. Sometimes I feel like I have migrated to another country as the hours are upside down," he says of the exhausting routine.

But he sees a reason for waking up in the dark.

"People like to have dim sum in the morning, to be energised with some tea before going to work," he told AFP.

"I feel happy when people think the food is delicious."

He adds that he wants to preserve the restaurant's hard-won reputation.

"My dad is already 85-years-old but he still works here -- as the young generation, we should try to be even better." 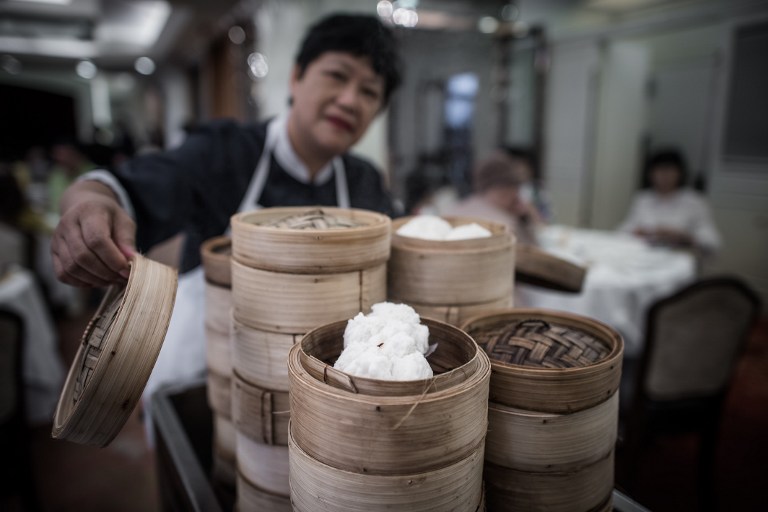 A waitress serves baskets of dim sum on a trolley in a restaurant in Hong Kong. ©AFP/Philippe Lopez