Sixty years after Humphrey Bogart steered her through crocodile infested waters, the African Queen is back plying the Nile. Lovingly restored, the boat is operated by Cam McLeay, a New Zealand adventurer and Nile enthusiast, and took its first passengers for a ride in December. "The African Queen belongs on the Nile. So it is so important to have the boat back home over 60 years after the film was made," McLeay told
AFP. 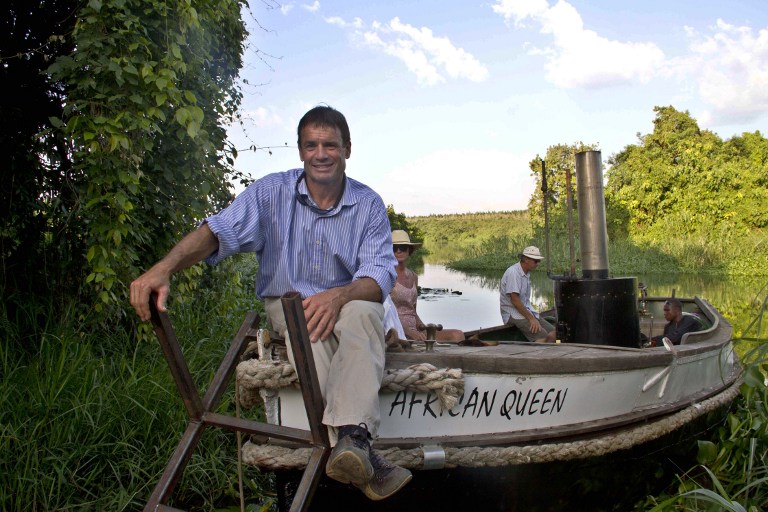 Cam McLeay, owner of the African Queen , sits on his boat with his colleagues on the shores of the River Nile in Jinja, Uganda, on December 21, 2013. ©AFP

In 1950 Bogart and Katherine Hepburn flew into Uganda together with a huge team from Hollywood to shoot the movie of the same name. The film told the story of a prim missionary and a gruff adventurer, the captain of the African Queen -- two totally different characters -- who in true silver screen fashion end up falling in love despite the odds. Hepburn wrote a frothy account of the making of the African Queen, which was shot between Uganda and neighbouring Democratic Republic of the Congo, subtitled "How I went to Africa with Bogart, Bacall and Houston and almost lost my mind". Based on a 1934 novel by C.S. Forester, the movie was set during World War I in German-occupied east Africa. "There were actually two of these boats, one of them was in Congo and this is the Nile's African Queen," explained McLeay, who recounts his love affair with the Nile. "I'm very attached to the Nile. I've travelled the full length of the river, from the Mediterranean to the source in Nyungwe," the father of three recounted. "I've been up and down the river for 16 years." Back in the 1990s he set up a rafting company in Uganda's Jinja area, and then had an eco-lodge built on an island in the river. McLeay says he wants his projects to be sustainable -- from both an economic and an environmental point of view. 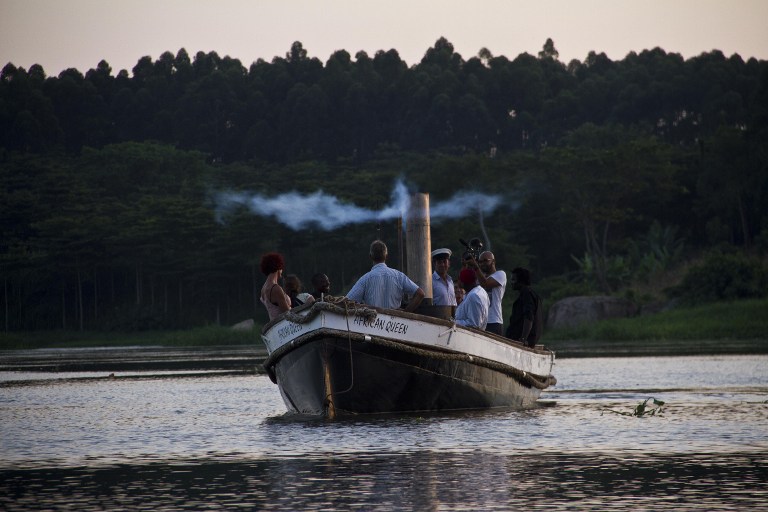 The African Queen boat motors on the Nile in Jinja, Uganda, on December 21, 2013.©AFP

Recreation of past times He then started thinking about a river boat to do trips and sundowner cruises for tourists, showcasing the scenery and the very varied birdlife. "Just on this section here, we have over 100 species of birds. It's just beautiful to be on the river here at the sunset on the Equator," he told AFP. McLeay learned of the existence of the African Queen when on holiday on Kenya's island of Lamu, where traditional Arabic-style sailing dhows with lateen sails are common. "I was looking for an authentic African boat to run on the Nile and I was thinking of buying a Swahili dhow," he recounted. "Then this hotel owner said: 'Why don't you buy the African Queen? She's from Uganda!'" A week later McLeay had gone to Nairobi and tracked down Yank Evans, a septuagenarian who explained how he had found the hull of the boat abandoned in northern Uganda's Murchison Falls national park 20 years earlier and had done it up. When he left Uganda for Kenya he brought the boat with him. Another five years went by between the boat's return to the banks of the Nile and the start of services on the river. One of the challenges was to rebuild the steam engine, which was more than 100 years old. In the movie, directed by John Huston and released in 1951, the boat was powered by a diesel engine that was made to look like a steam engine. But when Evans restored it he decided to fit a real steam engine and had one airfreighted from Britain. "When we got this boat, the boiler had been sitting around for a very long time," explained Gavin Fahey, the African Queen's captain and mechanic, adding that he had to strip down the engine and re-machine it. McLeay explains that he has tried to recreate an atmosphere of times gone by on board his African Queen, the time when huge tracts of Africa were -- for Western adventurers at least -- still virgin territory waiting to be explored. "Gavin wears the same kind of clothes as Humphrey Bogart. We have adopted the fez for the waiters, which is associated with the Sudan, where the Nile makes most of his journey," McLeay said. "And we are serving gin and tonics, like Humphrey Bogart drank in the movie." 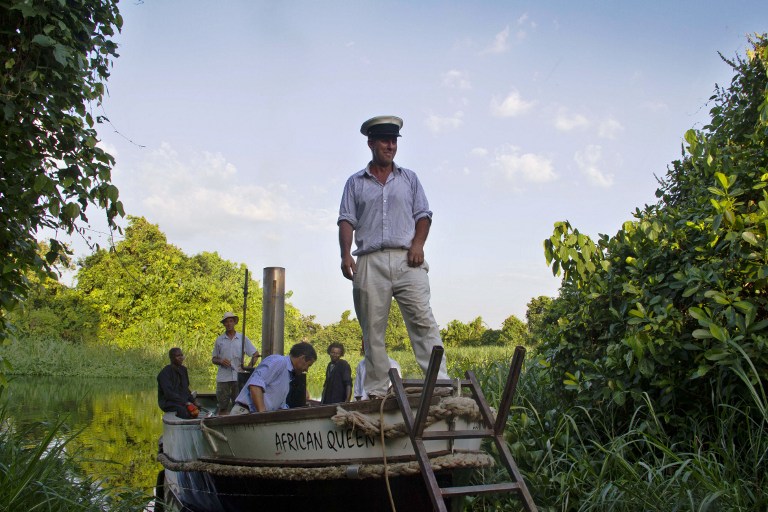 Gavin Fahey, skipper and the mechanic who repaired the African Queen, stands on the boat on the River Nile in Jinja, Uganda, on December 21, 2013.  ©AFP

Keeping the engine fed with wood has virtually no environmental impact, McLeay says, since he is using wood left over from a construction project, and he has planted trees to ensure supply when that stock runs out. "It's probably more environmental friendly then a modern boat," he says.

By Emmanuel Leroux-Nega from AFP