Afghan teenager Malek Mohammad balances on his hands, readies his stumps, then dives perilously into the water. The 18-year-old, whose legs were blown off by a Soviet landmine, dreams of swimming for Afghanistan in the London Paralympics. "I hope they select me to participate in the London Games. So I am just praying," he told AFP at the small pool where he trains in Kabul, in a nation known better for a deadly Taliban insurgency than international sporting prowess. "If I get a medal from the Olympics that will be good for my country, for my people. Disabled people will be proud of me, my family, everyone." Malek is one of tens of thousands of Afghan amputees, victims of three decades of war -- 10 years of fighting against Soviet troops in the 1980s, civil war and the current Taliban insurgency -- that have made Afghanistan one of the most heavily mined countries in the world. In January, the United Nations estimated that in 20 years it had dismantled more than 500,000 anti-personnel mines, 22,000 anti-tank mines and 15 million unexploded munitions. 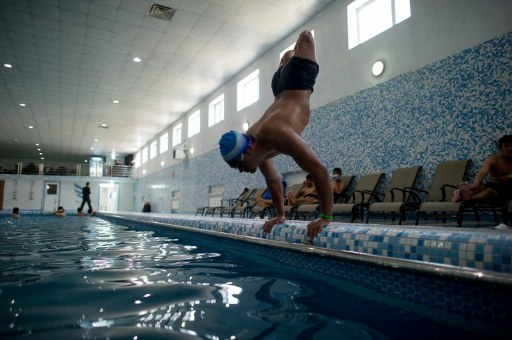 Such weapons killed or wounded 375 people in 2011, according to the United Nations. Last year, homemade bombs planted by the Taliban along roads and ditches killed another 1,000 people, the world body said.

Malek's life changed forever in 2005, when he walked into a Russian mine field near Kabul airport. He stepped on one of them and landed on another that then exploded. His mother, Sabza Gul, recalled her shock when she saw him gravely wounded in hospital. "He didn't even look human. When I saw my son in pieces like that, I fell unconscious right in the hospital. I felt like someone ripped my insides out." Malek lost both legs and any hope of a normal life in a country where ordinary life was already difficult. There was one silver lining however. 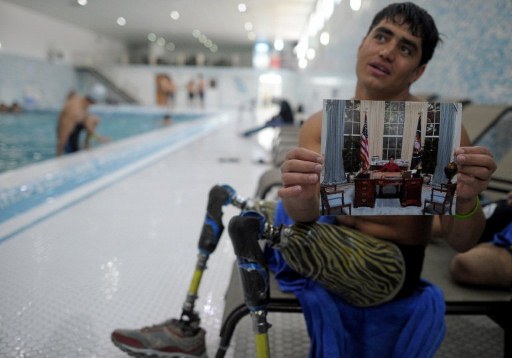 When the US government's development agency, USAID, heard about his condition, it managed to get him treated in the United States and he ended up staying there for two years. "I learned English, I learned how to swim, how to walk with (prosthetic) legs, I learned how to make friends," he said. Malek is covered in scars. Surgeons have yet to remove all the shrapnel from his body, but his experiences in America turned him into a huge supporter of the United States, which has nearly 100,000 troops fighting the Taliban in Afghanistan. He met George Bush Senior, the former president, and treasures an autographed photograph taken with him with the message: "Good luck and have a great life." A handsome boy with a muscular chest, Malek appeared on television and newspaper articles were written about him after he won a local swimming competition in San Diego, California, and posed for a calendar of handicapped athletes. "Before the accident, I was nothing. I was just a child with my family. I was a bakery worker and a student," he says, fitting his US-made prosthetics decorated at the bottom with a star-spangled banner. "I want to go higher, higher, higher." He now has to wait to see whether the International Paralympic Committee decides to invite him -- he hopes along with half a dozen other handicapped Afghan athletes -- to go to the London Games, which start on August 29 and run until September 9. Malek is hopeful of making the Afghan delegation, despite his limited preparation. The small pool where he trains has recently opened in Kabul but the only way he can get there is in taxis, which are expensive. 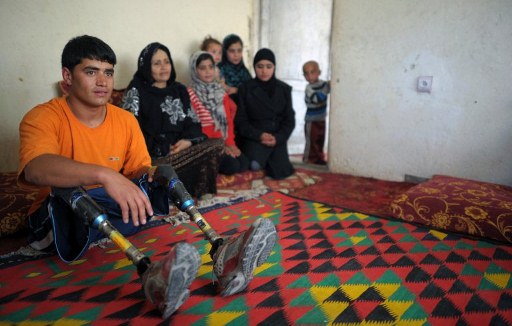 "I need support. My family are poor. We are really not rich," he said. His mother says she does her best. "Sometimes Malek gets sick and because our situation is not good, I cannot give him the kind of food an athlete needs. Most of the time I feel sorry for myself and I pray to God, 'You have given me this son, please feed him and help him.'" Kabeer Khoshbeen, an Afghan athlete with an amputated arm, believes that Malek is just weeks away from winning Afghanistan's first medal at the Paralympics and becoming a national hero. "Disabled people -- they are all waiting for him to get a medal, they hope he will become a hero."

by Joris Fioriti from AFP